(American Actress, Singer and One of the Rare Performers Awarded With EGOT (Emmy, Grammy, Oscar, Tony))

Liza Minnelli is an American actress and stage performer of illustrious lineage. Her Mother Judy Garland was one of the most famous actresses of the twentieth century and her father Vincente Minnelli was a well-known film director. She went on to become immensely popular in stage performances, television sitcoms, musicals and films. She was practically raised at MGM studios while her parents worked long hours there. Her first recognition came from play ‘Best Foot Forward’, in which she acted. Soon, her mother gave her an opportunity in her show at the London Palladium which was a roaring success and the show was sold out immediately. Her performance in London was a huge turning point in both her career and her relationship with her mother. Over the recent years, she has leaned more towards stage performances and musical albums. She has had to deal with tabloid stories of drug abuse and ill-health and has had a number of high profile stays at drug-rehabilitation clinics. She is among the few performers who have won an Emmy, Grammy, Tony Award and Academy Award. Minnelli success and her continued performance till this age is a proof of her artistic gift and her versatility in different forms of entertainment. She is still recognised as one the most energetic and versatile performers in America. Also Known As: Liza May Minnelli

American People
Actresses
American Women
California Actresses
Pisces Singers
Childhood & Early Life
Liza Minnelli was born on March 12, 1946, in Hollywood, California, to famous parents, singer and actress Judy Garland and film director Vincente Minnelli.
She attended New York City's High School of Performing Arts and Chadwick School. She attended Scarsdale High School for one year before starring in the production ‘The Diary of Anne Frank’.
She grew up visiting studios, sound stages and observing the film-making process. At the age of three, she made her first film appearance along with her mother in the 1949 musical ‘In the Good Old Summertime’. 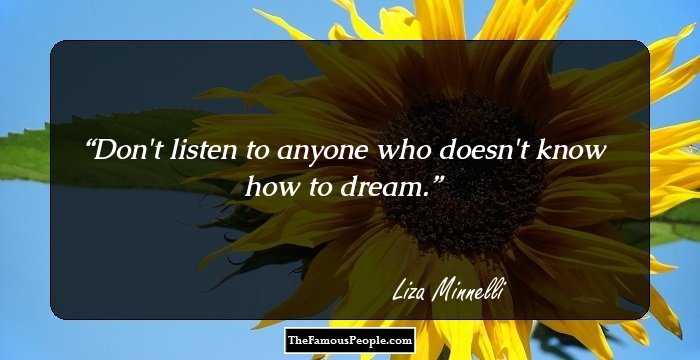 Continue Reading Below
Career
She was an apprentice at the Cape Cod Melody Tent., Massachusetts in 1961. She appeared in the chorus of ‘Flower Drum Song’ and played the part of Muriel in ‘Take Me Along’.
In 1963, she began professionally performing at the age of seventeen in an off- Broadway revival of the musical ‘Best Foot Forward’. For this performance she received the Theatre World award.
Her career as a live performer took off in the following three years and she recorded several albums. Notable among them were ‘Capitol Records: Liza’, ‘It Amazes Me’ and ‘There is a Time’.
Her first credited film role was in the 1967 movie ‘Charlie Bubbles’; the film was nterest’ in Albert Finney’s only film as director and star.
For a decade from 1968 she again went on a successful recording spree. Her popular numbers like ‘Liza Minnelli’, ‘Come Saturday Morning’ and ‘New Feelin' were released by A&M Records.
In 1989, she released an electronic dance-style album ‘Results’, in collaboration with the British duo Pet Shop Boys. The album hit the top 10 in the UK.
In 2001 she performed with long-time friend Michael Jackson at Madison Square Garden in New York. She sang ‘Never Never land’ and ‘You Are Not Alone’ at the performance.
In 2004, she played the part of ‘Lucille Austero’ in the Emmy Award winning TV sitcom ‘Arrested Development’..
In 2010, she was seen in the movie ‘Sex and the City 2’, as herself.
Continue Reading Below
In 2013, she returned again as ‘Lucille Austero’ for the fourth season of ‘Arrested Development’. 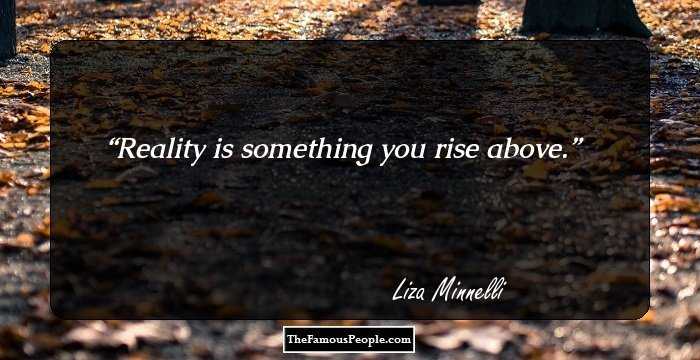 Quotes: You
Major Works
Her role as Sally Bowles, the floundering nightclub singer, in the musical ‘Cabaret’ in 1972 was highly acclaimed. For her role, she won the Academy Award and the Golden Globe Award for the Best Actress in a Leading Role.
Awards & Achievements
In 1973, Minnelli won the Academy Award the Best Actress in a Leading Role for her performance in the movie ‘Cabaret’.
In 1990, she was awarded the first Grammy Legend Awards along with three others. With this she became one among the distinctive twelve persons to win an Academy award, Tony award and Emmy award.
Personal Life & Legacy
Her personal life was eventful; she married Australian singer and entertainer to Peter Allen in 1967. This marriage lasted seven years and the couple divorced in 1974.
She married Jack Haley, Jr., a producer and director, in 1974. His father, Jack Haley, was Garland's co-star in ‘The Wizard of Oz’. This marriage ended in a divorce in April 1979.
She married Mark Geo, a sculptor and stage manager, in 1979. She suffered three miscarriages during this marriage. The couple divorced in 1992.
In 2002 she married David Gest, a concert promoter. This union was mired in alcohol induced violence and property disputes, and the marriage lasted just about a year.
In spite of her many relationships, Minnelli has no children due to medical complications that left her with a hiatal hernia caused in trying to save the baby during her pregnancy.
Throughout her lifetime, she has served various charities and causes that promoted awareness of HIV/AIDS and its research. The cause was dear to her as she had lost many friends to this disease.
Trivia
She is the only Academy Award winner whose both the parents were Academy Award winners.

See the events in life of Liza Minnelli in Chronological Order