Advanced Search
Lionel Messi is an Argentine former professional footballer counted amongst the best players in the world in football history. The only player in history to win five FIFA Ballons d'Or, he was also the first player to win three European Golden Shoes. During his playing career he shattered many world records and currently holds the records for most goals scored in La Liga, a La Liga season (50), a calendar year (91), a single season (73), and a Champions League match (5), among several others. Born into a football-loving family in central Argentina, he developed a passion for the sport at an early age and spent his childhood playing football with his brothers. He joined the youth team of Newell’s Old Boys as a young boy and began playing for FC Barcelona’s under-14 team when he was 13. Having made his competitive debut as a 17 year old, Messi quickly established himself as an integral player for the Barcelona club. His first big success came in the 2008–09 season, during which he helped Barcelona achieve the first treble in Spanish football. Over the ensuing years he proceeded to establish himself as Barcelona's all-time top scorer in official competitions and is also Argentina's all-time leading goalscorer with 55 goals in 112 matches. He retired in 2016 following Argentina's loss to Chile in the Copa América Centenario final. But, soon a campaign began to urge him to change his mind and Messi later on reversed his decision. Argentinian People
Argentine Men
Male Sportspersons
Cancer Football Players
Argentine Sportspersons
Childhood & Early Years
Lionel Messi was born to Jorge Messi and Celia Cuccittini in Rosario, Santa Fe Province. He has three siblings, two elder brothers Rodrigo and Matias, and a sister, Maria Sol. His father was a factory steel worker and his mother was employed as a part-time cleaner.
At the age of five, Messi started playing for the Grandoli, a local club coached by his father. By the time he turned eight, he was playing for Newell’s Old Boys. The group was immensely talented, which is visible from the fact that they lost just a single match in the next four years. It was their sheer interest and talent for the game that made the group popularly known as ‘The Machine of '87’
Unfortunately, Messi was diagnosed with a growth hormone deficiency when he was eleven. Despite being immensely talented, he was not offered help by the local clubs, who were not willing to pay for his treatment.
It was at this juncture that Carles Rexach, the sporting director of FC Barcelona, came to his aid. He promised to offer help to Messi by paying for his medical bills only if the latter moved to Spain. Messi was enrolled at the Barcelona’s youth academy. 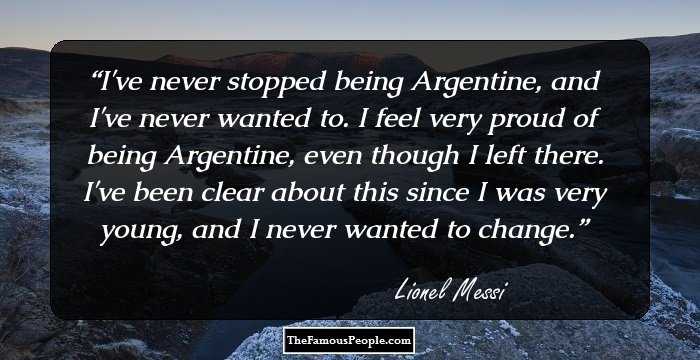 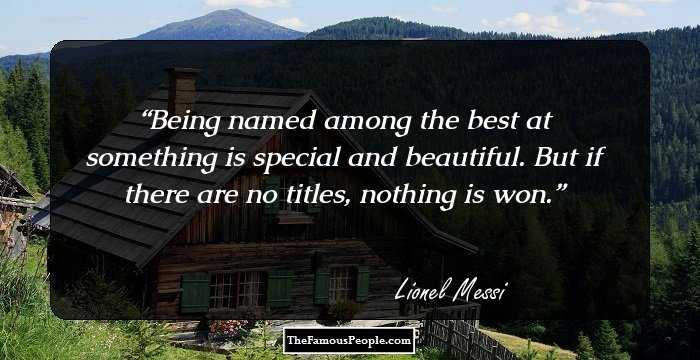 Quotes: Beautiful
Philanthropic Works
Messi established the Leo Messi Foundation, a charity supporting access to education and health care for vulnerable children in 2007. This was in response to Messi’s own medical ailments that he faced as a child. The foundation works towards providing children diagnosed with illnesses treatment in Spain funds covering the transport, hospital and recuperation costs. Most of the funds collected by the organization is through Messi’s own effort with a little aid by Herbalife.
Messi was the goodwill ambassador for UNICEF in 2010. He worked towards supporting children’s rights
In 2013, Messi donated a sum of €600,000 for the restoration of a children's hospital by the name Victor J Vilela Children's Hospital, in his hometown of Rosario, Argentina. The donated amount was basically used in restoring the oncology unit of the hospital and paying for doctors to travel to Barcelona for training.
Awards & Achievements
Messi’s excellence at the field has been lauded by the world over through the numerous awards, honors and achievements that he has been bestowed with. Messi has won the prestigious Ballon d'Or five times. He has won it in 2009, 2010, 2011, 2012 and 2015.
Continue Reading Below
Messi has on a number of occasions won awards in the young player of the year category. Some of them are World Soccer Young Player of the Year, FIFPro World Young Player of the Year and Copa America Young Player of the Tournament.
Messi has in his kitty 20 Player of the Year awards including FIFA World Player of the Year (1), World Soccer Player of the Year (3), Goal.com Player of the Year (2), UEFA Best Player in Europe Award (1), UEFA Club Footballer of the Year (1), FIFA U-20 World Cup Player of the Tournament (1), La Liga Player of the Year (3), La Liga Foreign Player of the Year (3) and La Liga Ibero-American Player of the Year (5).
For his knack of netting the ball to the goal, Messi has been awarded as the top goalscorer on numerous occasions. Some of them include IFFHS World's best Top Division Goal Scorer, IFFHS World's Top Goal Scorer, UEFA Champions League Top Goalscorer, FIFA U-20 World Cup Top Goalscorer and Copa del Rey Top Goalscorer.
Messi was honoured with the European Golden Shoe thrice in 2010, 2011 and 2012. He won the FIFA Club World Cup Golden Ball twice in 2009 and 2011. He was tagged as the European Golden Boy in the year 2005.
He was part of the Argentine football national team that won the gold medal in the 2008 Summer Olympics. 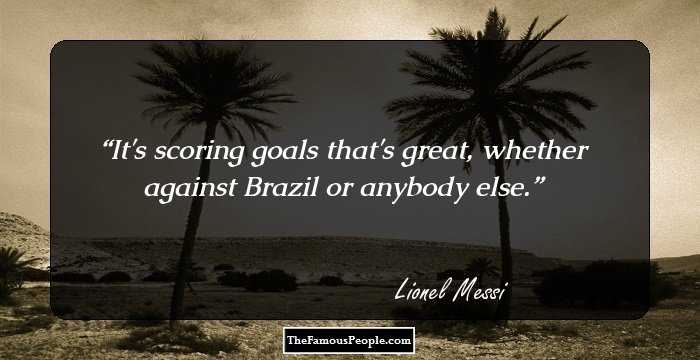 Family & Personal Life
Messi has had quite a couple of romantic associations before he got steady with his wife Antonella Roccuzzo. He was first linked with Macarena Lemos, a female from his hometown Rosario, whom Messi was introduced to by the former’s father while he was recovering from his injury before the 2006 World Cup. He is even said to have shared a love bond with Argentine glamour model Luciana Salazar.
Messi was first seen with his wife Roccuzzo at a carnival in Sitges after the Barcelona-Espanyol derby. A fellow native of Rosario, Roccuzzo gave birth to their first child, Thiago on November 2, 2012 and second child Mateo, on September 11, 2015.
After several years of being in a relationship with Roccuzzo, he married her on 30 June 2017. Their wedding was held at a luxury hotel named Hotel City Center in Rosario.
Continue Reading Below
Messi and Roccuzzo welcomed their third child, a son Ciro Messi Roccuzz, in 2018.
Trivia
His first ever contract was not on any official stamp paper or a bond paper. Instead, Carles Rexach, the sporting director of FC Barcelona, offered him to play for the club in a contract written on paper napkin! Rexach was so impressed that he wanted to make a contract then and there.
He was offered to play for Spain’s U-20 team at the international level but he ruled out the offer due to his Argentinian heritage and later took up a place at the Argentina’s U-20 team.
Ever since his league debut for Barcelona in 2004, he has, through his excellence at the game and complete know-how of the technique, created numerous records. Currently, he is Barcelona’s top scorer in La Liga, UEFA Champions League, European competitions and international competitions. He has also the most number of hat-tricks scored by any Barcelona player.
He holds the Guinness World Records of most number of goals in a calendar year: 91 goals. Additionally, he is the only world player to score in 19 consecutive league matches, his goal count for the same being 30.
He has a style that is similar to Maradona. On two occasions, in the 2006-07 seasons, he replicated Maradona’s goal style with perfection. Over the years, his actions have shown the same character as that of Maradona, who himself declared this talented footballer as his successor.
Top 10 Facts You Did Not Know About Lionel Messi
Although Lionel Messi has Spanish citizenship, he is of Italian origin. His paternal family is from the Italian city of Ancona in the Marche region.
He shares the same birthplace, Rosario, with the Argentine revolutionary, Che Guevara.
Despite his fame, he still maintains close connections with the people of Rosario, his hometown. He is also the international ambassador of Rosario.
Messi has his own version of the Hand of God goal. On 4 October 2006 in a match against Recreativo de Huelva, he scored a goal with his hand.
‘SportsPro’ has cited him as one of the world's most marketable athletes every year since 2010.
One of the world's highest-paid footballers, he was the first player to exceed the €40 million benchmark.
He has his mother’s face tattooed on his left shoulder.
He is the only player with four FIFA Ballon d'Or awards and three European Golden Shoe awards. Additionally, he won the Golden Ball award twice and the European Golden Boy award once.
Messi holds the record for the most hat-tricks scored (four in total) in Champions League.
He is known for his excessive love for food and his favorite dish is escalope Milanese.

Quotes By Lionel Messi | Quote Of The Day | Top 100 Quotes

See the events in life of Lionel Messi in Chronological Order