Advanced Search
Mauro Emanuel Icardi is an Argentinean professional football player who presently plays as a striker for the Argentinean national football team and for the Italian football club ‘Internazionale.’ He has been serving as the captain of ‘Internazionale’ since 2015. He started his career in football with the Spanish football team ‘Vecindario’ at the age of 9 and proved his mettle by netting more than 500 goals in various youth categories of the club. He got offers from various clubs such as ‘Real Madrid,’ ‘Arsenal,’ and ‘Liverpool.’ He finally joined ‘Barcelona’ in 2008. After almost three years, he joined ‘Sampdoria’ in 2011. His senior career with ‘Sampdoria’ began in 2012 and he joined ‘Internazionale’ in 2013. He, along with Luca Toni of ‘Hellas Verona,’ became the joint winner of the ‘Capocannoniere’ title after both of them became top-scorers of the 2014–2015 season of ‘Serie A,’ with 22 goals each. Icardi was enlisted in the ‘Serie A Team of the Year’ in 2014–2015 and crossed the 100-goal mark in a ‘Serie A’ in March 2018. He became part of Argentinean national ‘Under-20’ football team in 2012 and made his senior international debut with the Argentinean national football team in October 2013. Argentinian People
Italian People
Italian Men
Male Sportspersons
Italian Sportspersons
Pisces Football Players
Childhood & Early Life
Icardi was born on February 19, 1993, in Rosario, Argentina, to Analía Rivero and Juan Icardi. He began playing soccer at the age of 5, in a juvenile team called ‘Sarratea.’
When he was 9 years old, his family migrated to Spain due to recession and settled in the Canary Islands. His father, Juan, worked in a restaurant as Icardi started his youth football career with ‘Vecindario.’
Between 2002 and 2008, he netted over 500 goals in the youth categories of the club, thereby garnering attention from several top clubs, scouts, and managers. He received offers from clubs such as ‘Liverpool,’ ‘Barcelona,’ ‘Arsenal,’ and ‘Real Madrid’ among others.
He finally joined ‘Barcelona’ in 2008, signing a contract till 2013, and was inducted in the ‘Under-17’ team. The next season, he was promoted to the ‘Under-19’ team.
Continue Reading Below
Career
He signed a contract with the Italian association football club ‘Unione Calcio Sampdoria,’ better known as ‘Sampdoria,’ on loan, till the end of the 2010–2011 season, a confirmation of which was made by the club on January 11, 2011. He spent a six-month stint with the club’s ‘Primavera’ team, on loan, during which he scored 13 goals in 19 games.
In July 2011, ‘Sampdoria’ bought ‘Icardi’ for €400,000, signing a deal of three years.
His first-team debut with ‘Sampdoria’ was on May 12, 2012, in a 2–1 win against ‘Juve Stabia.’ The match also marked the first professional goal netted by him.
He made his ‘Serie A’ debut on September 26, 2012, against ‘Roma.’ He netted his first goal in the professional league competition on November 12 that year, during the ‘Derby della Lanterna,’ when ‘Sampdoria’ scored a 3–1 win over ‘Genoa.’
He scored both the goals of his team’s 2–1 win over ‘Juventus’ at the ‘Juventus Stadium’ on January 6, 2013, which marked the second loss of ‘Juventus’ at the stadium.
He turned heads with his spectacular performance in his club’s match against ‘Pescara,’ scoring four goals in a six-goal win by ‘Sampdoria’ on January 27, 2013. With this win, the club moved away from the relegation area of ‘Serie A.’
He joined the professional Italian football club ‘Internazionale’ in 2013. The deal between the club and ‘Sampdoria’ included a transfer fee of €6.5 million for 50% registration rights. On August 25 that year, he made his official debut with ‘Internazionale’ in its 2–0 home win against ‘Genoa.’
He scored his first league goal for the club on September 14, 2013, netting the first goal of a 1–1 draw against ‘Juventus.’
On June 10, 2014, ‘Internazionale’ went on to take full ownership of Icardi, in lieu of another €6.5 million.
Continue Reading Below
Icardi made his European debut with ‘Internazionale’ on August 20, 2014, in a 3–0 win over Iceland's ‘Stjarnan,’ during the first leg of the play-off round of the 2014–2015 ‘UEFA Europa League.’ The match also marked his first European goal.
He scored his second ‘Serie A’ hat-trick on September 14, 2014, when ‘Internazionale’ scored a 7–0 win against ‘Sassuolo.’ He concluded the 2014–2015 season by becoming the top goal-scorer of ‘Serie A,’ along with Luca Toni of ‘Hellas Verona.’ Both Icardi and Toni scored 22 goals each and earned the ‘Capocannoniere’ title.
He was included in the ‘Serie A Team of the Year’ in the 2014–2015 season. As the season came to an end, ‘Internazionale’ signed a fresh four-year contract with him.
He became the captain of ‘Internazionale’ in 2015, and the club garnered a league victory over ‘Atalanta’ in his first match as a captain.
He made his 100th ‘Serie A’ appearance on November 22, 2015, for ‘Internazionale,’ in which he netted a goal in his club’s 4–0 win over ‘Frosinone Calcio.’ The British daily ‘The Guardian’ ranked him as the 82nd-best footballer in the world in 2015.
He scored his 50th ‘Serie A’ goal on April 9, 2016, in his 100th appearance for ‘Internazionale,’ in a match against ‘Frosinone,’ which ‘Internazionale’ won 1–0.
On October 7, 2016, his contract with ‘Internazionale’ was extended till June 2021. The contract included a €110 million buy-out clause. The deal guaranteed to fetch him €4.5 million every season, along with several bonuses depending on his performances, goals scored, and image rights.
By the first half of the 2016–2017 season, he had netted 14 goals, including several braces, and provided 5 assists. With this, he emerged as the most efficient striker in the top 5 leagues, outshining stalwarts such as Lionel Messi and Cristiano Ronaldo. His brilliant performance helped him reach the 49th position in the world ranking of ‘The Guardian,’ in 2016.
He scored a hat-trick in the ‘Derby della Madonnina,’ on October 15, 2017, with ‘Internazionale’ winning 3–2 against ‘Milan.’ He was the first player to have achieved this feat since Diego Milito in May 2012.
He crossed the 100-goal mark in ‘Serie A’ in his 180th ‘Serie A’ match, on March 18, 2018. He netted four goals in the same match, which helped ‘Internazionale’ win 5–0 over ‘Sampdoria,’ taking his tally to 103 goals. He scored his hat-trick within 14 minutes of the match, during the first half.
He made his youth international debut on August 14, 2012, with the Argentinean ‘Under-20’ football team, in a friendly match against Germany, and scored his first goal against Japan on August 19 that year.
His senior international career with the Argentinean national football team began in 2013, and he made his first appearance for the main squad on October 15 that year in a ‘FIFA World Cup’ qualifier match against Uruguay.
Personal Life
He married Wanda Nara, an Argentinean media personality and football agent, on May 27, 2014, in Buenos Aires, Argentina. They have two daughters, Francesca and Isabella, born in 2015 and 2016, respectively.
Wanda is the ex-wife of Maxi López, Icardi's former teammate from ‘Sampdoria.’ Icardi's marriage with Wanda created immense controversy and fueled animosity against him in Argentina. According to reports, Wanda’s marriage with López, with whom she had three sons, ended in a divorce after her relationship with Icardi was exposed.
Icardi faced controversy again when he offended a few ‘Internazionale’ fans by describing an incident in his autobiography, ‘Sempre Avanti’ (‘Always Forward’), published on October 11, 2016. He was forced to erase the portion from the book and was subsequently fined by ‘Internazionale.’

See the events in life of Mauro Icardi in Chronological Order 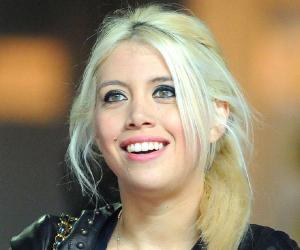