Lewis Hilsenteger is a Canadian YouTuber best known for his channel ‘UnboxTherapy’ on which he shares videos showcasing the latest technological products and gadgets. He is also popular for hosting another channel ‘MORE TOP 5’ on which he publishes videos concerning entertainment and lifestyle topics in a “Top 5” format. A well-educated man, he studied at the Toronto School of Art before venturing into the world of social media. Hilsenteger has become one of the most successful YouTubers in the contemporary scenario. His channels, especially UnboxTherapy, are immensely popular among the masses, with millions of subscribers on the social platform. While his primary channel has surpassed ten million subscribers, his second channel is also doing great in terms of views. The primary reasons behind the Canadian YouTube star’s success are his hard work and dedication. His love for digital arts and filming has got him where he deserves to be today. The best part of his content is that it is fresh, innovative, and unique. On a personal note, Hilsenteger is a married man. Kurtis Conner
Vloggers #790
Social Media Stars #420
DID WE MISS SOMEONE?
CLICK HERE AND TELL US
WE'LL MAKE SURE
THEY'RE HERE A.S.A.P
Quick Facts

Canadian People
Male Youtubers
Taurus Youtubers
Canadian Vloggers
Canadian YouTubers
Rise to Stardom
Lewis Hilsenteger launched his channel UnboxTherapy in December 2010. Since then, he has been publishing unboxing videos on it, showcasing the coolest products out there in the market. From the newest smartphones and Bluetooth speakers to surprising gadgets you never knew existed, his channel has everything for tech lovers. No matter which unboxing video you choose to watch, it would be detailed and hence will make you aware about the product, its usage, features, pros and cons, and so on.
Recommended Lists:

Taurus Men
Coming to Hilsenteger’s second channel, this channel ‘MORE TOP 5’ was launched in 2014. This channel features Top 5 videos on subjects related to entertainment, technology, automobiles, and other topics of mass interest. Although the YouTuber doesn’t use this channel any more, he still has over 387k subscribers. Some of the must-watch videos of this channel are 'Top 5 Most Expensive Cars', 'Top 5 Fastest Internet in the World' and 'Top 5 Biggest Cities in the World'.
His video titled "iPhone 6 Plus Bend Test" is his most popular video till date. It accumulated about 67 million views within a year of being uploaded. Published in September 2014, it has over 70 million views today (as of June 2018). One of the most recent videos shared by Hilsenteger on his unboxing channel is 'The RGB Gaming Smartphone is Here'.
Lewis Hilsenteger is also incredibly famous on other social platforms like Twitter and Instagram. As of now, he has over 1.7 million followers and more than 1.3 million followers respectively on these websites.

The Hottest Male Celebrities With The Best Abs
Continue Reading Below
Personal Life
Lewis Hilsenteger was born on May 5, 1984 in Canada. He has a brother whose name is not known. He attended the Toronto School of Art and studied digital arts, video editing and photography there. He is married but hasn’t shared any details about his wife or any other personal information with his fans. 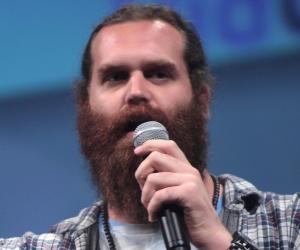