Laura Elizabeth Dern is an award-winning American actress, known for her riveting performances in TV series and movies. has displayed her acting skillsin movies like ‘Rambling Rose’, ‘Wild’, ‘Mask’, ‘Blue Velvet’, ‘Jurassic Park’, ‘October Sky’, ‘Citizen Ruth’ and ‘The Fault in Our Stars’. For her performance in ‘Rambling Rose’, she was nominated for an Academy Award. She appeared as Vice Admiral Amilyn Holdo in the film ‘Star Wars: The Last Jedi’. She has also played major roles in TV series like ‘Ellen’, ‘F Is for Family’, ‘The Last Man on Earth’, ‘Unbreakable Kimmy Schmidt’ and ‘Twin Peaks’. The actress has won on three occasions at the Golden Globe Awards for her outstanding performances in ‘Afterburn’, ‘Recount’ and ‘Enlightened’. She has even bagged a few awards at the Primetime Emmy Awards for her acting in the HBO series, ‘Big Little Lies’. Like many stars, Laura too, has been very vocal against sexual assaults on female movie stars in the industry. Winona Ryder
DID WE MISS SOMEONE?
CLICK HERE AND TELL US
WE'LL MAKE SURE
THEY'RE HERE A.S.A.P
Quick Facts

Laura Elizabeth Dernwas born on February 10, 1967, in Santa Monica, Los Angeles County, California, USA. She is the daughter of Diane Ladd and Bruce Dern, who were actors themselves. Her great grandfather, George Dern, was the former Governor of Utah and Secretary of War.

Laura’s parents divorced in 1969, and hence she lost touch with her father at a very young age. She was then brought up by her mother and grandmother who were ardent Roman Catholics.

Laura had a tough time growing up as she was extremely tall when compared to her classmates. While still in her teens, she was 1.78 meters tall and was often teased by her classmates for her slouching figure and big feet.

At the tender age of 9, Dern started attending the Lee Strasberg Theater and Film Instituteto study acting. She emancipated from her mother at the age of thirteen, when Diane Ladd objected to her being cast in ‘Ladies and Gentlemen, The Fabulous Stains’. 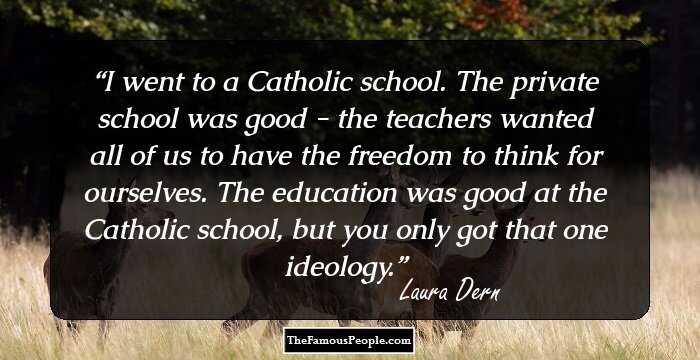 Her first acting role was in the 1973 movie, ‘White Lightning’. But success came to her only when she played one of the lead characters in the 1980 movie, ‘Foxes’. The movie premiered on February 29, and her performance was praised.

In 1981, Laura Dern appeared in the TV series ‘Shannon’ and later went on to star in the role of Jessica McNeil in ‘Ladies and Gentlemen, The Fabulous Stains’. Her performance in the moviewon her the Miss Golden Globe award.
Dern then appeared in a number of minor roles in TV movies like‘Happy Endings’ and ‘The Three Wishes of Billy Grier’. She also received critical acclaim for her role as Diane in the satirical comedy-drama film ‘Teachers’.
She landed two major roles in 1985, which established her as a bankable star in the industry. She first appeared as Diana in the biographical drama, ‘Mask’, which also starred Cher and then played the lead role of Connie in the thriller, ‘Smooth Talk’.

1986, was the year that saw Dern team up with the legendary director David Lynch for the first time. She portrayed the role of Sandy Williams in the crime-thriller, ‘Blue Velvet’. She would go on to work with Lynch in four other movies throughout her career.

In spite of being praised for her acting, Dern only enjoyed moderate success from 1988 to 1990. During this phase, she starred in movies like ‘Haunted Summer’ and ‘Fat Man and Little Boy’, and in the TV series, ‘Nightmare Classics’. She also played small roles in ‘Wild at Heart’ and ‘Industrial Symphony No. 1: The Dream of the Broken Hearted’.

In 1991, she portrayed the lead role in the drama movie, ‘Rambling Rose’. Interestingly, her mother was also a part of the cast. The movie premiered on September 20, and both Laura and Diane were nominated for an Oscar at the Academy Awardsin 1992.

By 1993, Laura was already an established star in Hollywood and this led to her being cast in the lead role of Dr. Ellie Sattler, alongside Sam Neill and Jeff Goldblum in the groundbreaking blockbuster, ‘Jurassic Park’. She was also cast by Clint Eastwood in ‘A Perfect World’, the same year.

The actress was seen in the 1995 TV movie, ‘Down Came a Blackbird’ and then lent her voice fora character named June in the series ‘Frasier’. The next year, she portrayed the role of Ruth Stoops in Alexander Payne’s directorial venture,‘Citizen Ruth’.
Continue Reading Below

Laura Dern appeared in the role of Susan in the TV series,‘Ellen’. Her character was seen in two episodes. In ‘The Puppy Episode’, aired on April 30, 1997, she played a lesbian who goads Ellen to come out. The episode was famous because it was the actual coming out of Ellen DeGeneres as a lesbian and that caused a huge controversy.

From 1999 to 2001, Dern acted in movies like, ‘A Season for Miracles’, ‘October Sky’, ‘Novocaine’, ‘Focus’, ‘I Am Sam’ and ‘Goose’. She had a minor role in ‘Jurassic Park 3’ as well.
From 2002 to 2003, the actress started appearing more on TV. She played US Poet Laureate Tabatha Fortis in the TV series, ‘The West Wing’ and Linda Peeno in the critically acclaimed TV movie, ‘Damaged Care’. She also lent her voice forcharacters Katherine and Serving Wench in the animated series, ‘King of the Hill’.

2004, saw the actress playing the role of Terry Linden in the award-winning movie, ‘We Don’t Live Here Anymore’. She was nominated for the second best performing actress at the Seattle Film Critics Awards.

David Lynch cast her in the movie ‘Inland Empire’ in 2006, and she also had a small role in ‘Lonely Hearts’. The next year, Dern starred in the comedy movie, ‘Year of the Dog’.
The 2008 TV movie ‘Recount’, starring Dern and the likes of Kevin Spacey, earned her a Golden Globe Award. In the next few years, she appeared in several movies like ‘Tenderness’and ‘Everything Must Go’.
Dern was then cast in the lead role of Amy Jellicoe in the 2011 HBO drama series, ‘Enlightened’.Shewas praised by the critics fornicely portrayingthe role of a self-destructive woman, looking to live an enlightened life.
In 2014, Dern was seen in a number of TV series and movies like,‘Kroll Show’, ‘Drunk History’, ‘When the Game Stands Tall’ and ‘99 Homes’. She also played the role of Shailene Woodley’s mother in the romantic hit ‘The Fault in Our Stars’.She thenreceived an Academy Awards nomination for her acting in ‘Wild’.
In the year 2017, she appeared in several award-winning TV shows. She won awards for her portrayal of Renata Klein in ‘Big Little Lies’. She is also voiceacting in the animated series ‘F Is for Family’, and has been cast as Diane Evans in the series, ‘Twin Peaks: The Return’.
Continue Reading Below
She is also playing the role of Vice Admiral Amilyn Holdo in the upcoming movie, ‘Star Wars: The Last Jedi’. 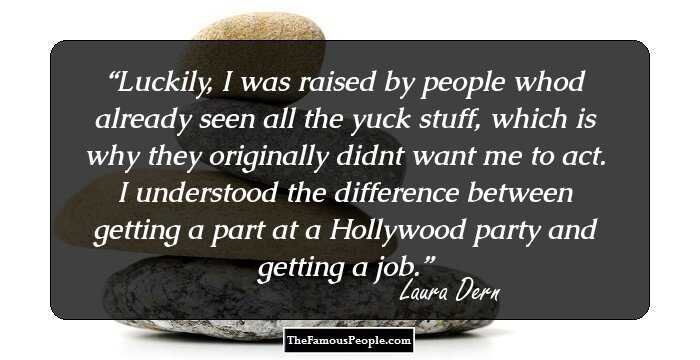 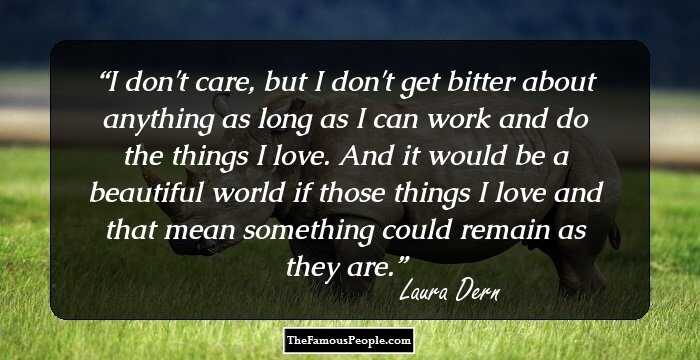 Laura Dern was married to musician Ben Harper until their divorce on September 2013. The couple had two children. She was also engaged to Jeff Goldblum and Billy Bob Thornton for some time after her divorce. In 2017, she was romantically linked to Baron Davis.

The brilliant actress actively supports charities like ‘Healthy Child Healthy World’ and has been raising awareness for Down syndrome.

On October 18, 2017, she admitted that she was sexually assaulted at the age of fourteen.

See the events in life of Laura Dern in Chronological Order