Ben Harper, a versatile singer-song writer, is a native of California, USA. He grew up in a family of music lovers, listening to an array of music, popular at that time. He began to appreciate blues, folks, reggae, soul and R&B, all of which influenced his singing so much so that it is very hard to categorize the singer. He embraced all the genres of music so easily and was accepted by critics as well as the younger generation. He is credited with reviving the blues along with masters like Charlie Musselwhite. As a lyricist, he came up with lyrics that appealed to the heart of innumerable music lovers with its earnestness and sincerity. He is not only known for his vocal skills but is an ace guitarist as well. He established a fan base not in only in the U.S but also in North America, Europe, Australia and New Zealand. He is also known for his activism and admired all over the world. He has received two Grammys, and according to critics, he would have had more trophies and commercial successes to his credit, had he not experimented too much. American People
Lyricists & Songwriters
Folk Rock Singers
Rhythm & Blues Singers
American Men
Childhood & Early Life
Ben Harper was born in Pomona, California to Leonard and Ellen Chase. He was just five when his parents got divorced. He was brought up with his brothers, Joel and Peter, by his mother’s family.
His grandparents ran a music store called, ‘The Folk Music Centre and Museum’ which was frequented by such prominent artists as Leonard Cohen, Taj Mahal, John Darnielle, and David Lindley.
When he was nine, he attended reggae legend Bob Marley’s concert in Burbank, California. This unforgettable concert left a lasting impression on his tender mind and influenced his music. 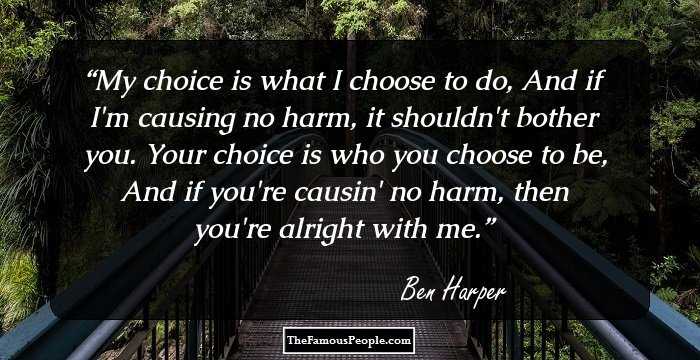 The Hottest Male Celebrities With The Best Abs
Career
Ben Harper began playing in his first gig at twelve. Initially, he played the slide guitar and copied the style of Robert Johnson, the American blue singer, then switched to the Weissenborn slide guitar.
His first major break came with an invitation from the Grammy winning blues musician, Taj Mahal, to tour Hawaii. Together, they recorded the album, ‘Follow the Drinking Gourd’, in 1990.
In 1992, he recorded a LP, ‘Pleasure and Pain’, with singer-songwriter and multi- instrumentalist, Tom Freund. This limited edition record helped him earn a career long contract with Virgin Records.
Virgin Records released his debut album, ‘Welcome to the Cruel World’, in 1994. Now, established as a folk musician in California, he was supported by a band, the ‘Innocent Criminals’.
He was invited to play at the three-day annual music festival, ‘Rencontres Trans Musicales of Rennes’, in France in 1993. It was the first time he played on a big stage.
In 1995, he released the album, ‘Fight For Your Mind’. The album was well received and critics praised the singer’s attempted fusion of folk, rock, reggae and heavy metal genres.
He was one of the featured singers in the 2002 documentary, ‘Standing in the Shadows of Motown’, a history of ‘The Funk Brothers’.
The singer participated in the ‘Vote for Change’ concert tour in 2004 to benefit a movement to encourage people in the crucial swing states to vote during the presidential elections of 2004.
In 2004, he also worked in the live recording of the song, ‘Oppression’, for the album ‘For The Lady’, dedicated to the then incarcerated Burmese opposition leader, Aung San Suu Kyi.
Continue Reading Below
He formed a band called ‘Fistful of Mercy’ which consisted of singers like Dhani Harrison and Joseph Arthur, and released their debut record, ‘As I call You down’ in 2010.
Ben Harper was one of the co-producers of the lead vocalist Natalie Maines’s first solo rock album ‘Mother’ that released in May, 2013. 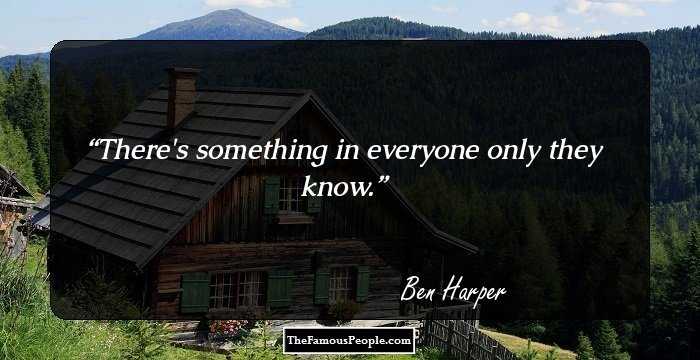 Major Works
Ben Harper’s 2003 album, ‘Diamonds on the Inside’, consisted of songs mostly written by the singer. It reached No.19 on the Billboards 200 Chart, sold double platinum in Australia and New Zealand.
‘Both Sides of the Gun’ was a two-disc album released by the singer in 2006. The album debuted at No. 7 on the Billboard 200 Chart and also did well commercially in Australia.
Awards & Achievements
He was named the ‘Artist of the Year’ by the French magazine, ‘Rolling Stone’, in 2003, following his successful tour of Australia, New Zealand, France, Portugal, Germany and Switzerland.
In 2005, he received the Grammy Awards in two categories—the ‘Best Pop Instrumental Performance’ for his piece, ‘11th Commandment’, and the ‘Best Traditional Soul Gospel Album’ for ‘There Will Be a Light’. 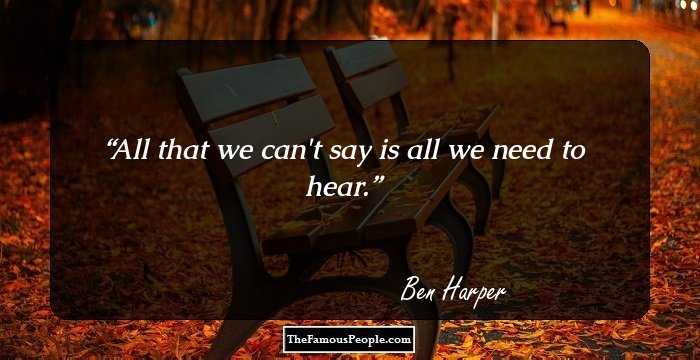 Quotes: Need
Personal Life & Legacy
Ben Harper got married twice between 1996 and 2013 - first to Joanna and then to Laura Dern, but bothe ended in divorce. He has four children from the marriages—Charles, Harris, Ellery Walker and Jaya.
He has an estimated net worth of $215 million attributed to stock investments, property holdings and endorsement deals with ‘CoverGirl’ cosmetics. Apart from these he is also the owner of several restaurants in Washington, and also owns a football Team.
Trivia
This prominent singer declared, ‘I really make an effort to live according to my word. That doesn't mean that I am exactly like in my songs’.
This famous singer-songwriter appeared briefly in the mystery film, ‘Inland Empire’, written and directed by David Lynch.

See the events in life of Ben Harper in Chronological Order