Kyrie Andrew Irving is an American professional basketball player who plays for the NBA team Cleveland Cavaliers. As a young boy, Irving was inspired by his father who was a professional basketball player himself. Having received both help and inspiration from his father, Irving was very active in sports during his high school days. He studied in Montclair Kimberley Academy and later, St. Patrick High School, being a brilliant player in both schools. His proficiency in basketball got him selected with the first overall pick in the 2011 NBA drafts. Over the course of his career, he has won an NBA championship and has also played for the United States national team, helping the team win the gold medal at the 2016 Summer Olympics. Other than sports, Irving has also made a few television appearances. He made a guest appearance in an episode of ‘Kickin’ It’, a martial arts inspired comedy TV series that aired on Disney XD from 2011 to 2015. Irving kindled controversy in February 2017 after he stated that the Earth is flat, contrary to what most people believe and what modern science claims. Later in an interview, he was less aggressive, and encouraged people to do more research into the topic themselves. Zion Williamson
Basketball Players #47
Sportspersons #496
DID WE MISS SOMEONE?
CLICK HERE AND TELL US
WE'LL MAKE SURE
THEY'RE HERE A.S.A.P
Quick Facts

American People
Basketball Players
Black Basketball Players
American Men
Duke University
Childhood & Early Life
Kyrie Andrew Irving was born on March 23, 1992 to American parents, Drederick and Elizabeth Irving in Melbourne, Australia. He has two sisters, Asia and London. The family moved to the US when Kyrie was young.
His father was a basketball player who played for the Bulleen Boomers. He had earlier played college basketball at Boston University. Irving lost his mother when he was only four years of age.
Irving grew up in West Orange, in New Jersey, US. He often went to his father’s adult-league games, from where he received his inspiration to play in the NBA one day.
Irving played for the Montclair Kimberley Academy, where he had an average of 26.5 points, 10.3 assists, 4.8 rebounds and 3.6 steals. Later, he transferred to St. Patrick High School, where he played alongside Michael Kidd-Gilchrist. As a teenager, he also played for the Road Runners of the Amateur Athletic Union. After completing high school, he joined Duke University.
Continue Reading Below
You May Like

The Sexiest Men Of 2020, Ranked
Career
From 2009, Kyrie Irving started playing for Duke University. During the 2010-11, he played with Duke under the guidance of Mike Krzyzewski, the head coach. He had an average of 17.4 points per game on 53.2% shooting, through the first eight games of the season, along with 5.1 assists, 3.8 rebounds and 1.5 steals. Though his team had advanced to the Sweet Sixteen of the NCA tournament, they fell to Arizona.
Irving entered the 2011 NBA draft, where he was picked by the Cleveland Cavaliers. Along with his teammate Tristan Thompson, he signed a contract with the team. Both of them were named to the 2012 Rising Stars Challenge. His skills earned him the 2012 NBA Rookie of the Year Award for the season.
In 2012, there was a heated debate about Irving being given a position on the Australian team for the 2012 Olympics. But Irving refused to represent Australia, and stated that he was more interested in being selected for the US National Team in the 2016 Olympics.
In the 2012-13 season, he injured his index finger in a game against the Dallas Mavericks, which resulted in a loss for the Cavaliers. His injury didn’t allow him to play for three weeks. However, later in the season, he was seen becoming the youngest player in the history of NBA to score 40 points in the Madison Square Grade.
His performance in the 2013-14 season was also remarkable. He recorded his first career triple double with 21 points, 12 assists and 10 rebounds in a 99-79 win against the Utah Jazz in February 2014.
Irving competed in the 2014 FIBA Basketball World Cup as a member of the US national team. He helped his team reach the finals, where they emerged victorious, winning a gold medal. He was also named the 2014 USA Basketball Male Athlete of the Year.
His performance in the 2015-16 season was the most noteworthy as he helped the team win the 2016 NBA Championship after defeating the Golden State Warriors in the finals.
In 2016, he represented Team USA at the Summer Olympics, where he helped the team win a gold medal. He also became the fourth member of the Team USA to have captured both the NBA Championship and an Olympic Gold the same year.
Awards & Achievements
Kyrie Irving has won several awards and honors throughout his career. He was named ‘Rookie of the Year’ in 2012 as well as named to ‘All-Rookie First team’ the same year.
In 2014, he helped his team win the gold medal at the FIBA Basketball World Cup and was named FIBA World Cup MVP.
His biggest achievements came in 2016. He aided his team win the NBA championship as well as the gold medal at the 2016 Summer Olympics in the same year.
Love Life
Kyrie Irving as once in a relationship with the popular American singer and songwriter Kehlani. He has also dated Chantel Jeffries. He has one daughter from a former girlfriend.

See the events in life of Kyrie Irving in Chronological Order 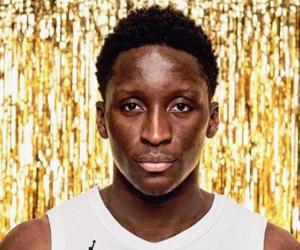