Kristin Chenoweth is an American singer, actress, and recording artist. She is best known for her performance in the musical ‘You're a Good Man, Charlie Brown’ and TV series ‘Pushing Daisies.’ A child prodigy, Chenoweth has appeared in many TV series. She has also sung in many concerts and hosted a number of shows, including the ‘Oscars Red Carpet Live’ event. Today, she is one of the most popular TV stars. As her body of work ranges from Broadway to studio albums, she is one of the most commonly seen faces at celebrity events. She is the recipient of the prestigious ‘Emmy’ as well as ‘Tony Award.’ She has a large number of songs, television, and movie appearances to her credit. She admires Amy Grant, Sandi Patty, Barbra Streisand, and Judy Garland and acknowledges that they have influenced her singing as well as her life. Chenoweth is also a devoted Christian and has expressed her religious beliefs several times at public forums. Blake Lively
24th July In History
DID WE MISS SOMEONE?
CLICK HERE AND TELL US
WE'LL MAKE SURE
THEY'RE HERE A.S.A.P
Quick Facts

Kristin Chenoweth was born Kristi Dawn Chenoweth on 24 July 1968, in Broken Arrow, Oklahoma, USA. She was adopted by Junie Smith Chenoweth and Jerry Morris Chenoweth when she was five days old.

As a child, she used to perform gospel songs and act in plays in her school.

She graduated from ‘Broken Arrow Senior High,’ after which she attended the ‘Oklahoma City University’ where she earned a BFA degree in musical theatre and an MA degree in opera.

In 1991, she was the second-runner up at the ‘Miss Oklahoma’ pageant. She also participated in the ‘Metropolitan Opera National Council’ auditions, which earned her scholarship to Philadelphia's ‘Academy of Vocal Arts.’ However, she gave up the scholarship and went to New York to act in the musical ‘Animal Crackers’ in 1993. 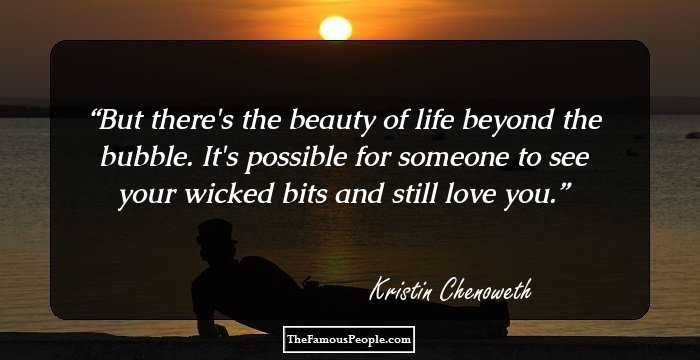 She made her Broadway debut in 1997 with the musical ‘Steel Pier.’ Her acting skills were appreciated widely. Soon, she was seen in another musical titled ‘Strike up the Band’ in 1998.

In 1999, her performance in the musical ‘You're a Good Man, Charlie Brown’ earned her great appreciation and fame and she received a ‘Tony Award.’

In 2001, she landed a role in the NBC sitcom ‘Kristin’ and also released her album ‘Let Yourself Go.’

In 2003, she starred in a Broadway musical titled ‘Wicked.’

In 2004, she was selected to play the role of ‘Annabeth Schott,’ a deputy press secretary for media relations, in the NBC political drama ‘The West Wing.’ The same year, she appeared in New York Philharmonic Orchestra’s operetta ‘Candide.’

In the years 2006 and 2007, she played the role of ‘Eve’ in the Broadway musical ‘The Apple Tree’ for which she received several nominations.

From 2007 to 2009, she appeared as ‘Olive Snook’ in the comedy-drama television series ‘Pushing Daisies.’

In 2009, she made a guest appearance in the famous musical comedy-drama series ‘Glee.’ She then appeared in ‘Glee’ in 2010, 2011, and 2014, earning an ‘Emmy’ nomination for her performance. The following year, she appeared in the Broadway musical ‘Promises, Promises.’

In 2012, she appeared as a guest in the popular sitcom ‘Hot in Cleveland.’ She then played the role of a political reporter in the television drama ‘The Good Wife.’ Unfortunately, she could not continue acting in the show as she suffered a head injury on the set on July 11, 2012.

She then voiced a character in the animation film ‘Rio 2,’ which released in 2014. She then appeared in the Broadway musicals ‘On the Twentieth Century’ and ‘My Love Letter to Broadway’ in 2015 and 2016 respectively.

In the meantime, she voiced characters in animated series like ‘BoJack Horseman’ and ‘American Dad!’ In 2015, she was part of the Disney original movie ‘Descendants’ where she played ‘Maleficent.’

Over the next few years, she appeared in several movies and TV series, such as ‘The Boy Next Door,’ ‘Hard Sell,’ ‘My Little Pony: The Movie,’ ‘American Gods,’ ‘Younger,’ and ‘Mom.’

In 2018, she landed the lead role in season 2 of NBC sitcom ‘Trial & Error.’ In the following year, she appeared in the Hallmark Channel movie ‘A Christmas Love Story.’ She was also seen in the Broadway musical ‘For the Girls.’

Over the years, Kristin has released seven studio albums, namely ‘Let Yourself Go,’ ‘As I Am,’ ‘A Lovely Way to Spend Christmas,’ ‘Some Lessons Learned,’ ‘Coming Home,’ ‘The Art of Elegance,’ and ‘For the Girls.’ 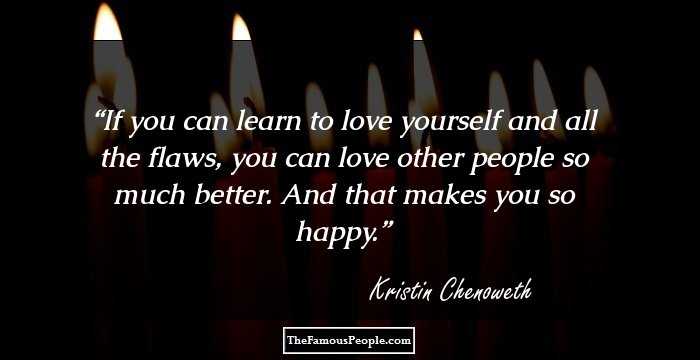 Quotes: You, Love, Yourself
Major Works

In the Broadway revival of the musical ‘You're a Good Man, Charlie Brown,’ she played the role of ‘Sally Brown.’ The musical was a huge hit, winning several nominations and awards.

In 2003, she earned immense recognition for her portrayal of ‘Glinda’ in the musical ‘Wicked.’ The musical earned three ‘Tony Awards’ and seven ‘Drama Desk Awards.’

She earned great fame for playing the role of ‘Annabeth Schott’ in the NBC sitcom ‘The West Wing.’ She also received appreciation for playing ‘Olive Snook’ in ‘Pushing Daisies,’ an ABC comedy-drama series.

In 2016, she released her sixth studio album ‘The Art of Elegance,’ which reached no. 36 on ‘Billboard 200’ and topped the ‘US Top Jazz Albums.’ It was also nominated at the ‘Grammy Awards’ for ‘Best Arrangement, Instrumental and Vocals.’

For her portrayal of ‘Sally Brown’ in the 1999 Broadway musical ‘You're a Good Man, Charlie Brown,’ she was presented with a ‘Tony Award’ for ‘Best Performance by a Featured Actress in a Musical.’

She also won the 2009 ‘Primetime Emmy Award’ for ‘Outstanding Supporting Actress in a Comedy Series’ for ‘Pushing Daisies.’ 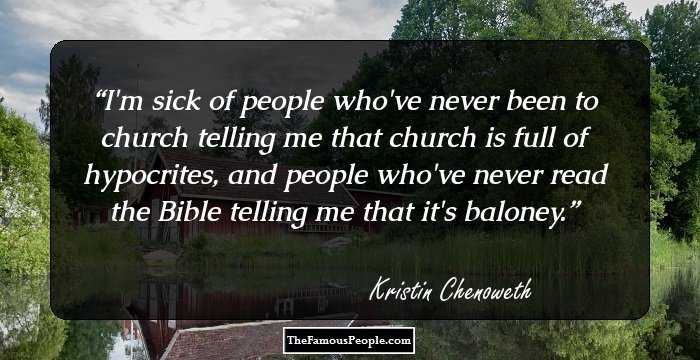 She is a devout Christian and has composed some songs in contemporary Christian music.

This famous singer and television star has a dog named Maddie, whom she named after actress Madeline Kahn.

‘The West Wing’ star was adopted by her parents when she was just five days old.

Quotes By Kristin Chenoweth | Quote Of The Day | Top 100 Quotes

See the events in life of Kristin Chenoweth in Chronological Order