Kristen Anne Bell is an American actor and singer. As a child, she bagged spots in advertisements and television commercials. During her high school years at ‘Shrine Catholic High School’, she appeared in the school production ‘The Wizard of Oz’ as Dorothy Gale. She attended ‘Tisch School of the Arts’ to graduate in Musical Theater, but left before graduating for a role in the musical version of ‘The Adventures of Tom Sawyer’. Her first credited role was in ‘Pootie Tang’. Like other aspiring artists, she too moved to Los Angeles, California, and once there, was able to win numerous television show appearances. Her film debut was in ‘Spartan’ alongside Val Kilmer. After a two-episode stint in the HBO drama ‘Deadwood’, she won the most prominent role of her career as Veronica Mars in the series of the same name, winning her many accolades. Some of her noteworthy movies are ‘Reefer Madness: The Movie Musical’, ‘The Receipt’, ‘Roman’, ‘Forgetting Sarah Marshall’, ‘When in Rome’, and ‘Veronica Mars’, the movie. She lent her voice and likeness for the character of Lucy in the video game ‘Assassin’s Creed’ followed by ‘Assassin’s Creed II’ and ‘Assassin’s Creed: Brotherhood’. She is the winner of the ‘Alliance of Women Film Journalists’ award for her voice role in ‘Frozen’. Jennette McCurdy
18th July In History
DID WE MISS SOMEONE?
CLICK HERE AND TELL US
WE'LL MAKE SURE
THEY'RE HERE A.S.A.P
Quick Facts

awards: 2005 - Satellite Award for Outstanding Actress in a Miniseries or a Motion Picture Made for Television
2006 - Horror Jury Award for Best Supporting Actress

American People
Voice Actresses
American Women
Michigan Actresses
Cancer Actresses
Childhood & Early Life
Kristen Anne Bell was born on July 18, 1980 to Lorelei Frygier, a registered nurse, and Tom Bell, a news director for CBS Television. After her parents’ divorce, her father re-married. She has two half-sisters, Sara and Jody.
After her parents pulled her from the public school system, she went to ‘Shrine Catholic High School’ in Royal Oak for her high school years. She was a member of the drama and music club.
She appeared in ‘Fiddler on the Roof’, ‘Lady Be Good’, and ‘Li’l Abner’, and in the school’s production of ‘The Wizard of Oz’ as Dorothy Gale. She graduated from high school in 1998.
She attended ‘Tisch School of the Arts’ at ‘New York University’ to major in Musical Theater. She left before graduating to take a role in Broadway’s musical version of ‘The Adventures of Tom Sawyer’. 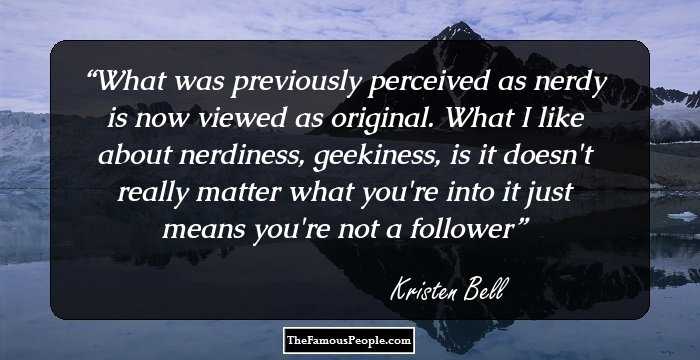 Quotes: Like, I
Continue Reading Below
Career
Bell’s first audition in 1992 won her a double role in ‘Raggedy Ann and Andy’ as a banana and a tree. With an agent’s help, she appeared in many advertisements and television commercials.
In 2001, she quit her studies for a role in the Broadway musical, ‘The Adventures of Tom Sawyer’ as Becky Thatcher. She won her first credited but insignificant role in ‘Pootie Tang’.
2002 saw her in ‘The Crucible’, a Broadway revival, with Liam Neeson and Angela Bettis. The same year she moved to Los Angeles, California, and won a few special appearances in television shows.
In 2004, she appeared in the TV film, ‘Gracie’s Choice’, and made her film debut as Laura Newton in ‘Spartan’ alongside Val Kilmer. She starred in two episodes of the HBO’s drama ‘Deadwood’.
She reprised her role in 2005’s ‘Reefer Madness: The Movie Musical’ as Mary Lane. In September of the same year, she rendered the theme song from ‘Fame’ on the 57th ‘Annual Primetime Emmy Awards’.
The year 2005 saw her as Gracie in ‘Fifty Pills’, a Tribeca Film Festival entry, and in films such as ‘The Receipt’ and ‘Roman’, a horror movie.
The 2006 movie ‘Pulse’, a remake of the Japanese horror film ‘Kairo’, saw her in the lead role of Mattie. Though the film grossed US$27.9 million worldwide, it was not well received by critics.
After the third season of ‘Veronica Mars’, the serial was cancelled. In 2007, she was cast in the series ‘Heroes’ in the role of Elle Bishop. She appeared in thirteen episodes of the series.
In 2008, the Star Wars-themed comedy, ‘Fanboys,’ with her in the role of Zoe was released. She voiced the character of Marybelle in ‘Sheepish’, an animated feature.
Continue Reading Below
Bell starred in ‘Serious Moonlight’ with Meg Ryan, and ‘Couples Retreat’ with Jason Bateman. The movie ‘When in Rome’, shot in Rome and New York, was released in 2010.
She made a cameo appearance in 2010 in ‘Get Him to the Greek’ as Sarah Marshall, reprising her role from ‘Forgetting Sarah Marshall’. She also starred in ‘Burlesque’ with singers Christina Aguilera and Cher.
She appeared briefly in 2011’s ‘Scream 4’ and in rock band Yeasayer’s music video for “Madder Red”. She voiced “Mary Magdalene” in the 22-hour audio, ‘The Truth & Life Dramatized Audio New Testament Bible’.
In 2012, she starred in ‘Big Miracle’. In the series ‘House of Lies’, she starred as Jeannie van der Hooven. She starred in ‘The Lifeguard’, which was released the following year.
Released on March 14, 2014, the movie version of ‘Veronica Mars’ saw her reprise her role. 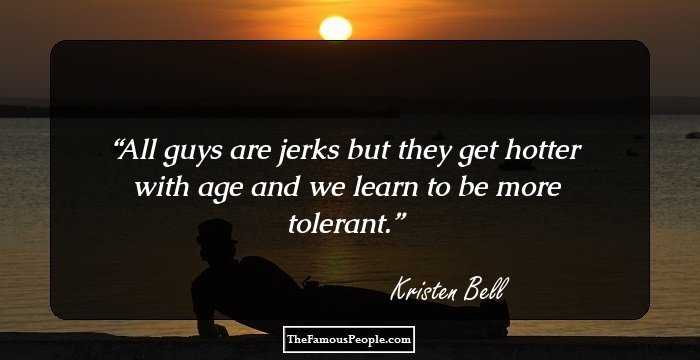 Major Works
Bell won the role of the Veronica Mars in UPN’s eponymous drama. In 2005, she was nominated for “Choice Breakout Actress” along with the cast of ‘Veronica Mars’, for “Choice Breakout TV Show”.
She gave her voice and semblance to the character of Lucy for the video game ‘Assassin’s Creed’ released in 2007. She later reprised her role in ‘Assassin’s Creed II’ and ‘Assassin’s Creed: Brotherhood’.
She was the voice of the title character in the series ‘Gossip Girl’, and even appeared as herself in the final episode. Year 2007 also saw her in ‘Forgetting Sarah Marshall’, in the title role.
Awards & Achievements
In 2005, Bell won the ‘Satellite Award’ for ‘Outstanding Actress in a Miniseries or a Motion Picture Made for Television’ for the movie ‘Reefer Madness: The Movie Musical’.
For her role as Veronica Mars in the series of the same name, Bell won the ‘Saturn Award’ for ‘Best Actress on Television’ in 2006. The series was nominated for “Best Network Television Show”.
In 2013, she won the ‘Alliance of Women Film Journalists’ award in the ‘Best Animated Female’ category for the animated film ‘Frozen’. She had provided the voice for the character of Anna. 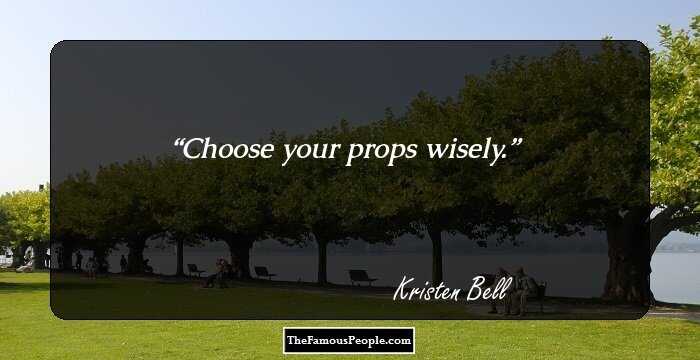 Personal Life & Legacy
After ending her five-year relationship with Kevin Mann, Bell began dating actor Dax Shepard. They got married on October 17, 2013, and have a daughter, Lincoln Bell Shepard. ||P
Trivia
This actress has confessed that many of the characters she portrays are tomboys because she was “not homely enough to play the nerdy girl and not nearly pretty enough to play the pretty girl”.

Quotes By Kristen Bell | Quote Of The Day | Top 100 Quotes

See the events in life of Kristen Bell in Chronological Order