Kirsten Dunst is a renowned American actress and model. She began modeling at the tender age of three and by the age of 12, she had appeared in more than 90 commercials. Kirsten gained major recognition through her breakthrough role in ‘Interview with the Vampire’ at the age of 12. Her captivating performance in the film not only made her a star but also proved that she was much more than a precocious youngster. As she grew up, she acted in movies of various genres, including children's films. Dunst achieved international fame after essaying the character of ‘Mary Jane’ in Sam Raimi's ‘Spider-Man’ trilogy. She has won several awards, including ‘Saturn Awards,’ ‘Empire Awards,’ and ‘MTV Movie Awards.’ She has also won the ‘Best Actress Award’ at ‘Cannes Film Festival.’ She also earned nominations for a 'Primetime Emmy Award,' an 'Academy Award,' and four 'Golden Globe Awards.' She also starred in fanatsy films 'Jumanji,' and the psychological drama film 'The Power of the Dog.' American People
American Women
New Jersey Actresses
Taurus Actresses
American Actresses
Childhood & Early Life
Kirsten Caroline Dunst was born on April 30, 1982, in Point Pleasant, New Jersey, USA, to Inez Dunst and Klaus Hermann Dunst. Her mother was a gallery owner who also worked as a flight attendant. Her father worked as a medical services executive.
Kirsten Dunst is of German and Swedish descent and holds citizenship in Germany as well. She has a younger brother named Christian Dunst who was born in 1987.
Dunst was hired as a child model at the age of three. She was signed by ‘Ford’ and ‘Elite Modeling Agency.’ At the age of six, she was cast in a short film titled ‘Oedipus Wrecks.’
In 1990, she played a supporting role in ‘The Bonfire of the Vanities.’ This comedy-drama was based on Tom Wolfe's novel. In 1993, Dunst made a guest appearance in an episode titled ‘Dark Page’ in the science fiction series ‘Star Trek: The Next Generation.’
Dunst lived in New Jersey until the age of 11. During that time, she attended ‘Ranney School.’ In 1993, her parents separated and she moved with her mother and brother to Los Angeles, California. She then studied at ‘Laurel Hall School’ and ‘Notre Dame High School.’

Her breakthrough role came in 1994, when she portrayed the character of ‘Claudia’ in ‘Interview with the Vampire.’ Although the film received mixed reviews, several film critics applauded Dunst's performance. The film also earned her a ‘Golden Globe Award’ nomination, ‘Saturn Award,’ and ‘MTV Movie Award.’

The next year, Dunst appeared in the fantasy adventure film ‘Jumanji,’ which was based on a supernatural and ominous board game.
She voiced ‘Young Anastasia’ in the animated film ‘Anastasia’ in 1997. The same year, she also played a role in the black comedy film ‘Wag the Dog,’ starring alongside Dustin Hoffman and Robert De Niro.
In 1998, she voiced the character of ‘Kiki’ in the movie ‘Kiki's Delivery Service.’ In 1999, she appeared in the comedy flick ‘Dick’ which was based on Richard Nixon’s ‘Watergate Scandal.’ The actress was also roped in to appear in Savage Garden’s music video ‘I Knew I Loved You.’
After graduating from ‘Notre Dame’ in the year 2000, Dunst started focusing on her acting career. 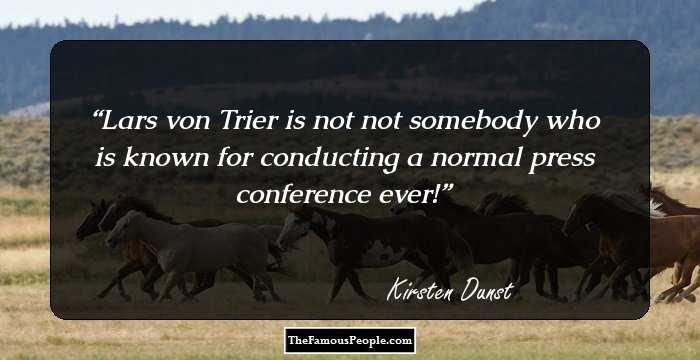 The Most Popular US Veterans
Career
Kirsten Dunst was cast as ‘Torrance Shipman’ in ‘Bring It On’ in 2000. The next year, she appeared in the comedy flick ‘Get Over It’ and also in the historical drama ‘The Cat's Meow.’
In 2002, this blonde beauty was cast opposite Tobey Maguire in the superhero film ‘Spider-Man’—the most financially successful movie of Dunst’s career to date. In the film, she played ‘Mary Jane Watson,’ the love interest of ‘Peter Parker’ (Spiderman).
The success of ‘Spider-Man’ led the actress to reprise her role as ‘Mary Jane Watson’ in ‘Spider-Man 2’ (2004).
The actress was then seen as ‘Claire Colburn,’ a flight attendant, in the 2005 romantic tragicomedy film ‘Elizabethtown.’ The following year, she collaborated with Sofia Coppola and starred as the lead character in ‘Marie Antoinette.’
In 2007, she once again reprised her role as ‘Mary Jane Watson’ in ‘Spider-Man 3.’
In 2011, Kirsten Dunst appeared in the drama film ‘Melancholia’ where she played a depressed woman.
She played the role of ‘Peggy Blumquist’ in the critically acclaimed television drama series ‘Fargo’ in 2015, and received a ‘Golden Globe’ nomination for her performance.
In 2017, she was cast as one of the teachers in the Southern Gothic film ‘The Beguiled’ which was directed by Sofia Coppola. It was a remake of the 1971 film of the same name.
The same year, she was also cast in the psychological thriller ‘Woodshock.’ In 2018, she was cast as ‘Krystal Stubbs’ in the dark comedy series ‘On Becoming a God in Central Florida,’ which premiered in August 2019.
Continue Reading Below 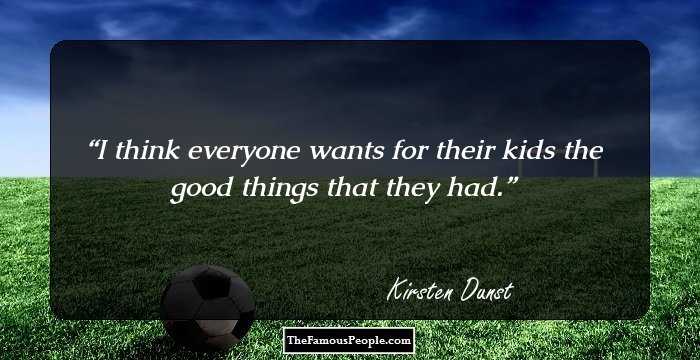 Major Works
Kirsten Dunst had a recurring role in the third season of the medical drama series ‘ER’ in 1996-97. The actress played a child prostitute who is taken under the guidance of a pediatrician. George Clooney also appeared in the series, playing the character of ‘Dr. Doug Ross.’
She played the character of ‘Lux Lisbon,’ a troubled teenager, in Sofia Coppola's drama movie ‘The Virgin Suicides’ in 1999. In this film, the actress perfectly portrayed innocence and wantonness.
As a singer, she recorded ‘After You've Gone’ – the jazz standard which was used in the soundtrack of ‘The Cat's Meow.’ She also crooned two songs in ‘Spider-Man 3.’ Besides these, she also sang for Jason Schwartzman's 2007 solo album ‘Nighttiming.’
Awards & Achievements
Kristen Dunst won the ‘MTV Movie Award’ for ‘Best Breakthrough Performance’ and ‘Saturn Award’ for ‘Best Performance by a Younger Actor’ for ‘Interview with the Vampire’ (1994).
She won the ‘Empire Award’ for ‘Best Actress’ and ‘MTV Movie Award’ for ‘Best Female Performance’ for her role ‘Marry Jane Watson’ in ‘Spider-Man’ (2002). In 2002, she was named in ‘People’ magazine's ‘50 Most Beautiful People’ list.
In 2011, she won the ‘Cannes Film Festival Award’ for ‘Best Actress’ for her performance in ‘Melancholia.’

In 2021, she earned an 'Academy Award' nomination for her role in the psychological drama film 'The Power of the Dog.' 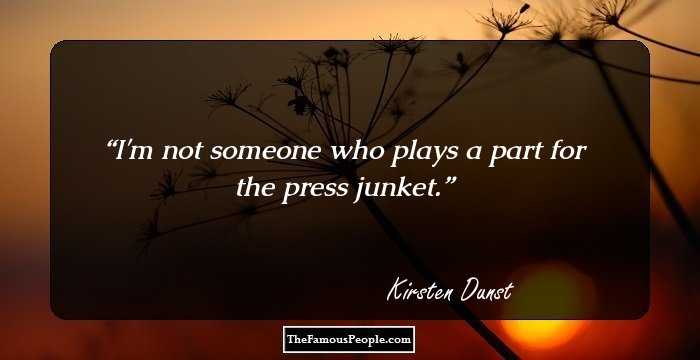 Kristen Dunst is known for her complicated love life. The actress has had several romantic relationships with popular Hollywood celebrities like Jason Boesel, Jake Gyllenhaal, Garrett Hedlund, and Johnny Borrell.

In early 2008, she was treated for depression at the ‘Cirque Lodge’ treatment center, Utah. In March 2008, Dunst was discharged from the center and began shooting for her films.

In 2016, she began dating the ‘Fargo’ actor Jesse Plemons. The couple got engaged in January 2017. They have a son named Ennis Howard Plemons, born in May 2018. In May 2021, the couple welcomed their second son, James Robert.

Humanitarian Work
Kirsten Dunst works with the ‘Elizabeth Glaser Pediatric AIDS Foundation.’ She helped design and promote the sale of a necklace, and the revenue generated from the sale went to the foundation.
In September 2008, she participated in the ‘Stand Up to Cancer’ telethon, and raised funds for cancer research.
She participated in a telethon that took place in Mexico on December 5, 2009, and raised funds for children's rehabilitation and cancer treatment.
Trivia
Kirsten Dunst turned down the opportunity to act in the film ‘American Beauty’ as the role required her to be part of intimate scenes.

2. Interview with the Vampire: The Vampire Chronicles (1994)

Quotes By Kirsten Dunst | Quote Of The Day | Top 100 Quotes

See the events in life of Kirsten Dunst in Chronological Order