Kid Cudi is an American rapper and actor best known for his ‘new wave’ of rap music which has inspired a lot of other artists, including Kanye West. He entered the American hip hop and rap music scene with his first mixtape, ‘A Kid Named Cudi,’ in 2008.’ By then, Kanye West had become one of the most respected names in rap. Kanye listened to Kid’s music and was immediately driven to get in touch with him. Soon, Kanye signed Kid for his label, ‘GOOD Music,’ and this gave a major boost to Kid’s career. Kid began as a rapper, but also ventured into song-writing, music production, video direction, and acting, acing each aspect of the entertainment industry. In 2008, he released his first single, ‘Day ‘n’ Nite,’ and announced his grand arrival, with a spot among the top five tracks on the ‘Billboard’ charts. The following year, he released his debut album, ‘Man on the Moon: The End of the Day.’ The album received a ‘Gold’ certification by RIAA. Since then, Cudi has released five more studio albums and has proved to be one of the most successful musicians of this generation. He has redefined an entire genre. He has also acted in some popular TV series and films, such as ‘Need for Speed’ and ‘Brooklyn Nine–Nine.’ American People
African American Singers
Rappers
Black Rappers
Black Singers
Childhood & Early Life
Kid Cudi was born Scott Ramon Seguro Mescudi in Cleveland, Ohio, on January 30, 1984. He grew up in a middle class household and was the youngest of the four children in the family. His mother, Elsie Harriet, worked as a middle-school teacher, and his father, Lindberg Styles Mescudi, was a house painter and a war veteran.

Kid had a difficult childhood as his parents fought over petty issues. His father died of cancer when Kid was elevn years old. This had a serious impact on his psyche, but music turned out to be an effective savior. However, the death of his father plunged him into depression.

Kid attended ‘Shaker Heights High School’ and was then transferred to ‘Solon High School.’ While he was fairly disciplined in the initial years, he turned into an aggressive person, as he approached his senior years. He started getting into fights and was expelled from school for threatening to punch the principal. However, he managed to join the ‘University of Toledo’ as a film student, though he dropped out after a year.

While he loved music, he was not very keen on making a career out of it, and desired to be a filmmaker. His fractured police record prevented him from joining the navy.
He did odd jobs initially, following which, he decided to make a career in music. Upon finishing high school, he started rapping for fun.

In 2008, he released his first single, Day ‘n’ Nite, followed by the mixtape ‘A Kid named Cudi,’ which grabbed the attention of Kanye West. Kanye was looking for some inspiration for his next album, and he was mesmerized by Kid’s emotional approach towards music. Day ‘n’ Nite became a top 5 bilboard hit. 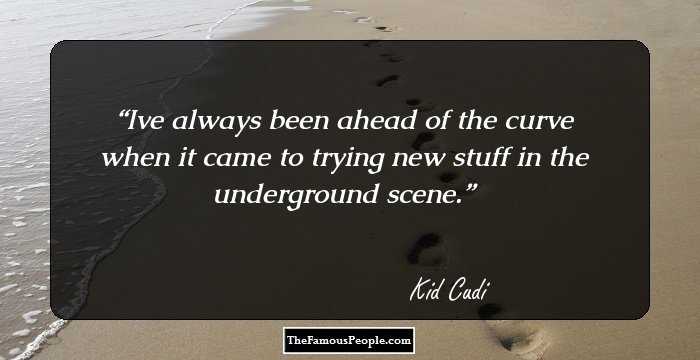 Black Musicians
Hip Hop Singers
Record Producers
Lyricists & Songwriters
Career
Kanye West has been known to be the mentor for many new artists, and he hired Kid to work on his album ‘808s & Heartbreak.’ Kid worked on the album’s singles, such as ‘Welcome to Heartbreak’ and ‘Heartless,’ as a co-writer and vocalist. The album became Kanye’s most successful so far, and Kid was exposed to an early fame.
Leading magazines, such as ‘Rolling Stone’ and ‘The Source’ regarded him as the artist to look out for, and he also had the opportunity to work on Jay-Z’s album ‘The Blueprint 3.’ The 2008 ‘MTV Video Music Awards’ was his first brush with mainstream limelight, and the highly talented artist found himself working with Kanye’s label, ‘GOOD Music.’

Following his initial success, Kid Cudi appeared alongside many artists, such as Solange and Snoop Dogg. He released a song ‘Sky Might Fall’ for the teaser soundtrack of the film ‘Transformers: Revenge of the Fallen.’

In September 2009, he released the album Man on the Moon: The End of Day to a roaring success and it sold more than a million copies in its very first week. The album was among the top five of many music charts and went double platinum. Soon, Kid announced his upcoming collaborations with various artists, such as Snoop Dogg, Clipse, 50 Cent and Travis Baker.

His second album, ‘Man on the Moon II: The Legend of Mr. Rager,’ was released in November 2010. The lead single, titled ‘Erase Me,’ was done in collaboration with Kanye West and was a success. His stint with Kanye continued for a couple of more years, during which the duo appeared in Kanye’s singles and in his collaborative album with Jay-Z, ‘Watch the Throne.’

Kid Cudi was making his own waves in the industry, but some felt that Kid was mostly operating under the shadow of Kanye. While Kanye claimed that Kid had been an inspiration to his music, Kid wanted an identity of his own, and this led to a minor feud with his mentor.
In mid-2012, Kid released his third studio album, ‘Indicud,’ which was also his last venture under the mentorship of Kanye. In 2013, Kid officially announced that he was no longer a part of Kanye’s ‘GOOD Music,’ but also said that Kanye would always be his ”big brother.” Following that announcement, Kid launched his own label, ‘Wicked Awesome Records.’

In February 2014, Kid Cudi released an extended play (EP) titled ‘Satellite Flight: The Journey to Mother Moon’ exclusively for the retail market. The album was a success and peaked at the fourth spot on the ‘Billboard 200’ chart. He promoted his album extensively on different platforms.

Meanwhile, he also worked on the soundtrack of the film ‘Need for Speed’ and made a short film ‘Balmain Jeans.’
By late 2015, his next album, ‘Speedin’ Bullet 2 Heaven,’ was in the markets and was writing some brand new success stories. His much hyped ‘Especial Tour’ was cancelled owing to his his troubled personal life. .

In 2016, Kid Cudi released another album, ‘Passion, Pain & Demon Slayin,’ which promised to be a sure-shot success even before its release, owing to the hype surrounding it. Rumors of his conflict with Kanye were somewhat addressed, when a single featuring both of them was leaked on social media.

In 2017, Kid embarked on a tour, and it was a mega success. Gradually, Kid slowed down on music and remained limited to collaborations.
Kid has also experimented with acting and has worked in a number of TV series, such as ‘The Cleveland Show,’ ‘Brooklyn Nine Nine,’ ‘Scorpion,’ and ‘Talking Dead.’ His film credits include titles such as ‘Maniac,’ ‘Need for Speed,’ ‘Meadowland,’ and ‘Drunk Parents.’ 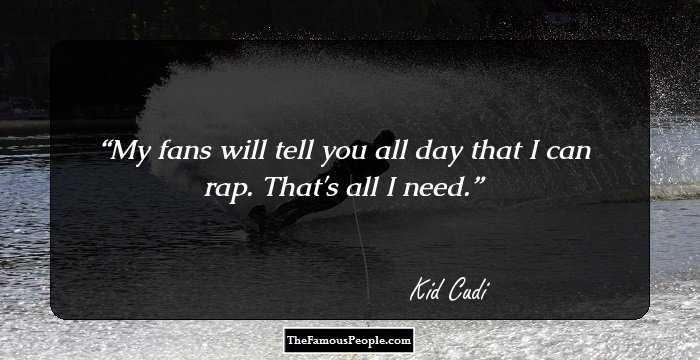 Quotes: You, Will, Need, I
Recommended Lists:

Black Hip Hop Singers
Black Record Producers
Black Lyricists & Songwriters
American Men
Personal Life
Kid Cudi has mostly remained a controversial figure, just as many of his contemporary rappers have been. He is a very emotional person and that reflects in his music.
His relationship with Kanye West has witnessed both ups and downs. Kid respected Kanye as an elder brother, as he introduced Kid to national fame. However, they have had their own episodes of feuds, though they have always reconciled quickly, out of the respect for each other.

Kudi is said to have dated attorney Jamie Baratta, in 2009. However, they broke up in 2012. In 2010, Kudi's first daughter named Vada Wamwene Mescudi was born.

See the events in life of Kid Cudi in Chronological Order