Grammy Award winning musician, singer and songwriter, Kenny Rogers had scored over 120 hit singles and had topped the country and pop charts for an unparalleled 200 individual weeks. He was one among ‘the highest- selling artists of all time’, and had sold more than 130 million record copies across the world. The ‘USA Today’ and ‘People’ magazine poll, voted him the ‘Favorite Singer of All-Time’. He was also a member of the Country Music Hall of Fame. A man who wore many hats, Rogers was also a photographer, record producer, actor, entrepreneur and author. He had appeared in the movie, ‘Six Pack’, and TV movies, ‘The Gambler’, ‘Christmas in America’ and ‘Coward of the County’. He authored the photo books, ‘Kenny Rogers' America’ and ‘Your Friends and Mine’. He also authored the autobiographical book, ‘Luck or Something Like it: A Memoir’. Some of his well-known albums include, ‘TheGambler’, ‘Kenny’, ‘Eyes That See in the Dark’, ‘Share Your Love', 'Gideon’, ‘Love or Something Like It’and ‘Kenny Rogers’. He also owned the restaurant chain, ‘Kenny Rogers Roasters’. 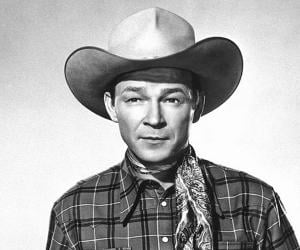 Kenneth Ray ‘Kenny’ Rogers was born on August 21, 1938, in Houston, Texas, to Edward Floyd Rogers, a carpenter and Lucille Rogers, a nurse assistant. He was raised in poor circumstances in a federal housing project.

He attended the Jefferson Davis High School, Houston, and became the first member of his family to finish high school. It was in high school that he decided to pursue a career in music. 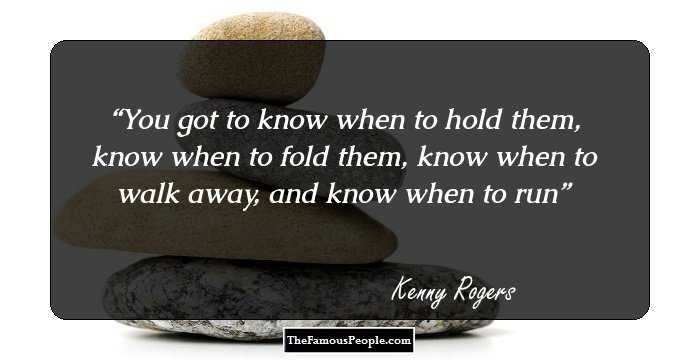 The Sexiest Men Of 2020, Ranked
Career
In the mid-1950s, Kenny Rogers began his career in music with the band, ‘The Scholars’. The band came to prominence after they released the single, ‘Poor Little Doggie’.
In 1958, he came out with a minor solo titled, ‘That Crazy Feeling’. He later became a part of the jazz group, 'The Bobby Doyle Trio', which earned a reasonable number of fans and also worked for Columbia Records.
In 1965, 'The Bobby Doyle Trio' broke up and the following year, he recorded the jazzy rock single, ‘Here's That Rainy Day’. The single was a failure and he continued to work as a writer, session musician and producer with other artists.
In 1966, he became a part of the American folk music group, ‘The New Christy Minstrels’. He was a singer and a double bass player for the group but was not happy with his association with the group as it did not offer him the success he wanted.
In 1967, he formed the group called, ‘The First Edition’, along with fellow Minstrel members Mike Settle, Terry Williams and Thelma Camacho. The group was later renamed ‘Kenny Rogers and The First Edition’. They released an array of hits, that topped the pop and country charts.
In 1976, he quit ‘The First Edition’, after being with them for a period of ten years, to begin a solo career. The same year, he released his first solo album titled, ‘Love Lifted Me’, which attained minor success.
In 1977, he came out with his self-titled second studio album, ‘Kenny Rogers’, which was released worldwide. It was his first major solo success. The album included the hit single, ‘Laura (What's He Got That I Ain't Got)' and ‘Lucille’.
In July 1977, he released his third solo album, ‘Daytime Friends’, which was a successful album. The album featured the tracks, ‘Daytime Friend’, ‘Desperado’ and ‘Rock and Roll Man’.
In 1978, Kenny Rogers released his fifth solo album, ‘Love or Something Like It’, which was a hit album. The title track of the album, which he also co-wrote, was an immense success. The same year he also released the collaboration album, ‘Every Time Two Fools Collide’.
Continue Reading Below
In November 1978, his sixth studio album, ‘The Gambler’, was released. The album’s title track earned him a Grammy Award and topped the charts, making him the most popular artist of that time.
Released in 1979, his seventh studio album, ‘Kenny’, was a successful, chart topping album. The album included the singles, ‘Coward of the County’ and ‘You Decorated My Life’.
In 1980, he released his eighth studio album, ‘Gideon’, which like its successors topped the country charts and the pop charts. The album also featured the international hit, ‘Don’t Fall in Love with a Dreamer’, a duet with Kim Carnes.
In September, 1980, he recorded the hit song, ‘Lady’ that was written by Lionel Richie. The following year, he came out with his first holiday album, ‘Christmas’ and the compilation album, ‘Greatest Hits’.
In 1981, he came out with his ninth studio album, ‘Share Your Love’. It was one of his bestselling albums. His subsequent albums include, 'Love Will Turn You Around’, ‘We've Got Tonight’ and the U.S. Country umber one, ‘Eyes That See in the Dark’.
In 1985, he released his album, ‘The Heart of the Matter’, which topped the music charts. The following year, he came out with the album, ‘They Don’t Make Them like They Used To’.
In 1987, he came out with his album, ‘I Prefer the Moonlight’, which was a success in the genre of country music. The same year, he sang the duet, 'Make No Mistake, She's Mine' with Ronnie Milsap.
In 1989, he came out with the album, ‘Something Inside So Strong’. The following year, he came out with the album, ‘Love Is Strange’. He subsequently released his albums, ‘Back Home Again’ and ‘If Only My Heart Had a Voice’.
In the 1990s he came out with the albums, ‘Vote for Love’, ‘Across My Heart’ and ‘She Rides Wild Horses’. He also released the collaboration album, ‘Timepiece’ with David Foster.
Continue Reading Below
In 2000, he came out with the album, 'There You Go Again', which featured the singles, ‘There You Go Again’, ‘He Will, She Knows’ and ‘Homeland’. His subsequent albums include, 'Back to the Well' and 'Water & Bridges'.
In 2011, he released the album, ‘The Love of God’ under the Cracker Barrel label. The following year he came out with the album titled, ‘Amazing Grace’ and the holiday album, ‘Christmas Live!’
In June 2013, he delivered a performance at the Glastonbury Festival of Contemporary Performing Arts. 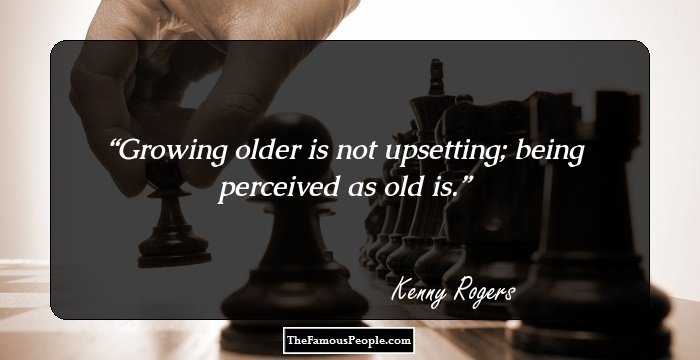 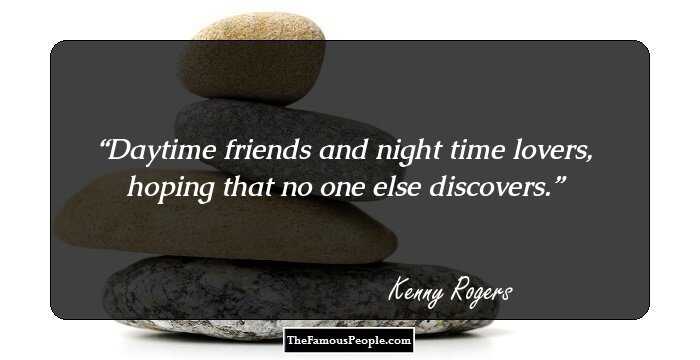 Kenny Rogers was married five times and all of his marriages ended in divorce. His spouses include, Janice Gordon, Jean Rogers, Margo Anderson, Marianne Gordon and Wanda Miller.

He fathered five children, one each from his previous marriages with Janice Gordon, Margo Anderson, Marianne Gordon and two from Wanda Miller.
Kenny Rogers died of natural causes at his home in Sandy Springs, Georgia, on 20 March 2020.
Trivia

This Grammy Award winning singer was also an actor and a photographer. He was once invited at the White House to create a portrait of First Lady Hillary Rodham Clinton.

Quotes By Kenny Rogers | Quote Of The Day | Top 100 Quotes

See the events in life of Kenny Rogers in Chronological Order