Kenny Chesney is an American country music singer and songwriter. He started his career in 1994 with the release of his debut album ‘My Wildest Dreams’. By 2014, he has sixteen hit albums to his credit. Among these, twelve have been certified gold and two have been certified platinum. Worldwide he has sold more than 30 million albums. In addition, he has produced more than forty singles, which have reached Top Ten Chart on the US Billboard Hot Country Songs. He has also found time to go on 14 musical tours. ‘The Big Revival Tour’ undertaken in 2015 attracted 1,358,026 audiences and grossed $114,094,584 in ticket sale. His ‘No Shoes Nation Tour’ undertaken the previous year was also a great success. In all, he has won the Billboard Touring Award for Top Package Tour for five consecutive years between 2005 and 2009, and again in 2011. Chesney has also won numerous awards for his albums and has been honored as ‘The Entertainment of the Year’ consecutively from 2005 to 2008. In addition, he has also produced a documentary on his favorite football star Condredge Holloway Jr. Taylor Swift
26th March In History
DID WE MISS SOMEONE?
CLICK HERE AND TELL US
WE'LL MAKE SURE
THEY'RE HERE A.S.A.P
Quick Facts

American People
Guitarists
American Men
Tennessee Musicians
Aries Singers
Childhood & Early Life
Kenneth Arnold Chesney, popularly known as Kenny, was born on March 26, 1968 in Knoxville, Tennessee. His father, David Chesney, was an elementary school teacher and his mother, Karen Chandler, was a hair stylist. He has a younger sister named Jennifer Chandler.
As a child, Kenny studied in Gibbs High School. In the beginning, he dreamt of becoming a star athlete. However, he had to abandon that dream as he did not grow taller than 5’8”.
Kenny graduated from Gibbs High School in 1986. In the same year, he received his first guitar as Christmas present from his mother. He soon taught himself how to play the instrument. This was also the time, he started composing songs.
After graduating from Gibbs High School, Kenny enrolled at East Tennessee State University to study advertising. Around 1987, he began to perform in a small club near his college campus at a remuneration of $5 per hour.
In 1989, Kenny recorded a musical album and released it on his own. The album sold 1000 copies and with that money, he bought a new guitar.
Kenny Chesney graduated from East Tennessee State University in 1990. He then headed for Nashville, where he performed at local clubs and became the resident singer at ‘The Turf’.
In 1992, Kenny was spotted by Clay Bradley, the head of writer relations of Broadcast Music. He referred Kenny to Troy Tomlinson of Opryland Music Group. At the audition, Kenny sang five songs, which greatly impressed Tomlinson. When Kenny left the audition, he already had a songwriter’s contract in his hand. 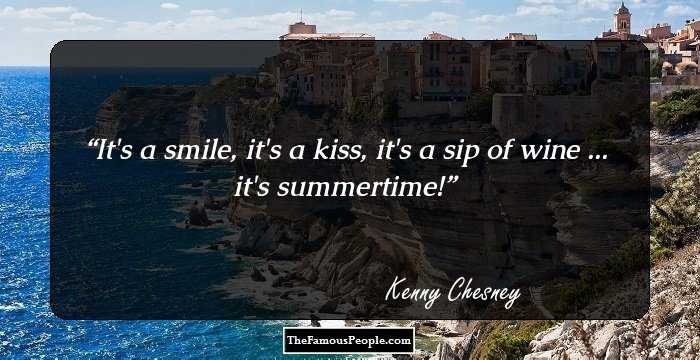 Continue Reading Below
Career
In 1993, Kenny was spotted by Capricorn Records at a songwriters’ show. His debut album, ‘My Wildest Dream’ was released in 1994 by Capricorn Records. The album sold around 10,000 copies and produced two chart singles on Billboard country charts; they were ‘Whatever It Takes’ and ‘The Tin Man’.
Kenny’s second album ‘All I Need to Know’ was released on June 13, 1995 by BNA Records. The title track and another song, ‘Fall in Love’ reached top ten while ‘Grandpa Told Me So’ was peaked at 23.
In 1996, Kenny released ‘Me and You’. It was his first gold certified album. ‘I Will Stand’ followed in 1997. The first single from this album ‘She’s Got It All’ remained at top of Billboard Country Chart for three weeks.
His first platinum selling album, ‘Everywhere We Go’ was released in 1999. It contained popular country songs such as ‘How Forever Feels’, You Had Me From Hello’, ‘She Thinks My Tractor’s Sexy’, ‘What I Need to Do’ etc.
On September 26, 2000, Kenny released his compilation album ‘Greatest Hits’. By this time he had become an established star with millions of fans across the globe. To promote this album, he went on the ‘Greatest Hits Tour’ in 2001. It was his first musical tour.
In 2002, Kenny released his next album, titled ‘No shoes, No Shirts’ No Problems’. It was a huge hit and its songs, especially, ‘The Young’ and ‘The Good Stuff’ remained at the top of the chart for a long time. The same year, he went on his second tour, ‘No shoes, No Shirts, No Problems’.
In 2003, Chesney went on ‘Margaritas N' Senorita's Tour’. His only Christmas album, ‘All I Want for Christmas Is a Real Good Tan’ was released in the same year.
On February 3, 2004, Chesney released his next hit, ‘When the Sun Goes Down’. The album sold 550,000 copies in the first week. In the same year, he went on ‘Guitars, Tiki Bars and a Whole Lotta Love Tour’.
In 2005, Chesney released two albums; ‘Be As You Are: Songs From an Old Blue Chair’ and ‘The Road And The Radio’. In this year he went on ‘Somewhere in the Sun Tour’.
Continue Reading Below
In 2006, he released his first live album called. “Live Those Songs Again.’ It includes live rendition of 15 of his songs. This was also the year when he went on ‘The Road and The Radio Tour’.
Chesney’s next album, ‘Just Who Am I: Poets & Pirates’ was released on September 11, 2007. On November 15, 2007, he released another compilation album titled ‘Super Hits’. ‘The Flip Flop Summer Tour’ was also organized this year.
Chesney released his next album, ‘Lucky Old Sun’ on October 14, 2008. ‘Everybody Wants to Go to Heaven’ and ‘Down the Road’ are two most popular singles from this album. This is also the year when he went on ‘The Poets and Pirates Tour’.
In April 2009, he began his ‘Sun City Carnival Tour’ starting at Uncasville, Connecticut. He ended it in Indianapolis in September 2009. This is also the year when he released his third compilation album ‘Super Hits II’.
In 2010, Cheney released a new album titled ‘Hemmingway Whiskey’. This is also the year when he produced a biographical film on his favorite football star Condredge Holloway Jr. The film was titled ‘The Color Orange’ and was premiered on February 20, 2011 on ESPN. ‘With a Two Tour’ was also organized that year.
Chesney next undertook his eleventh concert tour titled ‘Going Coastal Tour’. It began on March 17, 2011 at West Palm Beach and ended on August 27, 2011 in Boxborough.
In 2012. Chesney released his thirteenth studio album titled ‘Welcome to Fish Bowl’. One of its singles ‘Feel Like a Rock Star’ received four and half star out of five.
In June 2012, Chesney embarked on ‘Brothers of Sun Tour’ with Tim McGraw. They performed in 22 different cities starting at Tampa and ending at Foxboro in the end of August 2012. The tour drew over one million audiences and grossed $96 million in ticket sales.
In March 2013, Chesney went on his thirteenth tour ‘No Shoes Nation Tour’. It was organized to promote his newest album, ‘Life on Rock’, which was released on February 5, 2013.
Continue Reading Below
On September 23, 2014 Chesney released his latest album, ‘The Big Revival’. It was a big hit and many of its singles topped the Country Airplay Chart. The next year, he undertook ‘The Big Revival Tour’. It began on March 26, 2015 at Nashville and ended at Foxboro on August 29, 2015. 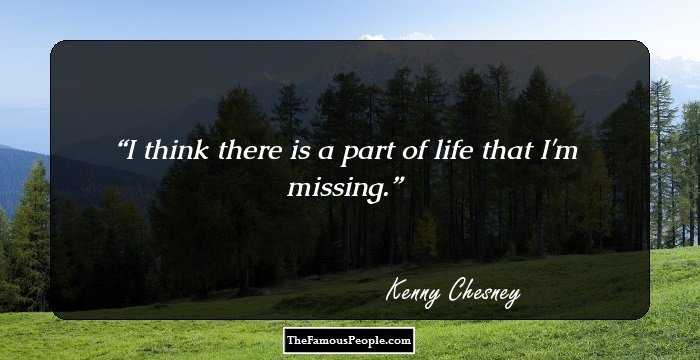 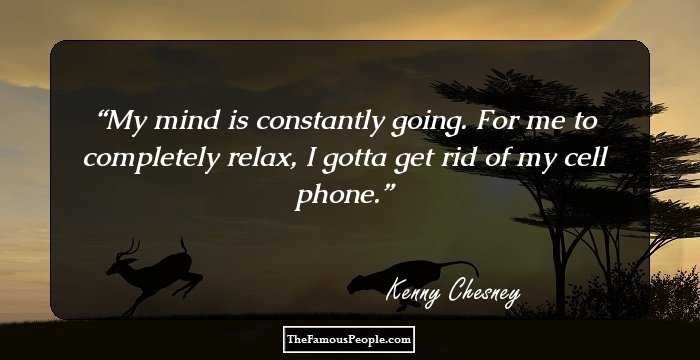 Quotes: Me, I
Personal Life
On May 9, 2005, Kenny Chesney married actress Renée Zellweger. However, the marriage did not last long. The couple announced their separation on September 15, 2005 and the divorce came through in the end of December of the same year. Although there was a rumor that the marriage did not last because Chesney was gay, he later clarified that he was straight.

Quotes By Kenny Chesney | Quote Of The Day | Top 100 Quotes

See the events in life of Kenny Chesney in Chronological Order