Keith Moon was a popular drummer of the British rock group The Who. He was well-known for his distinctive playing style. Songs like ‘Success Story’ and ‘Dreaming From the Waist’ from the album ‘The Who By Numbers’ mark his remarkable performance as a drummer. According to his biographer Tony Fletcher, he used to consider the drums as a lead instrument. He was also notorious for his lunatic behaviour, alcoholism and partying. Besides playing drums, he also acted in films like ‘Sextette’, 'Tommy’ and ‘200 Motels’. Influenced by the music of Elvis Presley and Eric Delany, he used to play bulge for a local band. Inspired by the work of renowned drummer Gene Krupa, he developed a strong penchant for drums. Later, he learnt playing drums from Carlo Little, a famous drummer. After his brief stint with the band The Escorts, he joined The Beachcombers. Later, he became a part of the band The Who. Several albums of the band 'The Who' feature his unique style of drumming. Apart from playing drums, he also performed as band’s singer. In this context, his singing of ‘Barbara Ann’ for the television programme ‘Ready, Steady, Who’ deserve special mention. ‘Two Sides of the Moon’ is his only solo album. John Bonham
DID WE MISS SOMEONE?
CLICK HERE AND TELL US
WE'LL MAKE SURE
THEY'RE HERE A.S.A.P
Quick Facts

British Celebrities
Alcoholics
Drummers
British Men
Virgo Drummers
Childhood & Early Life
Born in Wembley, Middlesex, England, Keith Mon was the son of Alfred Charles, a maintenance mechanic and Kathleen Winfred Moon, a cleaner. He was hyperactive by nature and a mediocre student.
In September 1951, he studied at the local primary school, Barham. After failure at his eleven plus examination, he took admission at Alperton Secondary Modern School.
He developed fondness towards music from a very young age. He was greatly influenced by the music of Elvis Presley. In 1958, he joined Sea Cadet Corps, a local band where he played bulge. Later he played trumpet for this band.
In 1961, he cleared the Royal Society of Arts examination in English and Science and left Alperton Secondary Modern School. After that he took admission at Harrow Technical College. During this period, he met Gerry Evans through whom he became acquainted with the band, The Escorts. 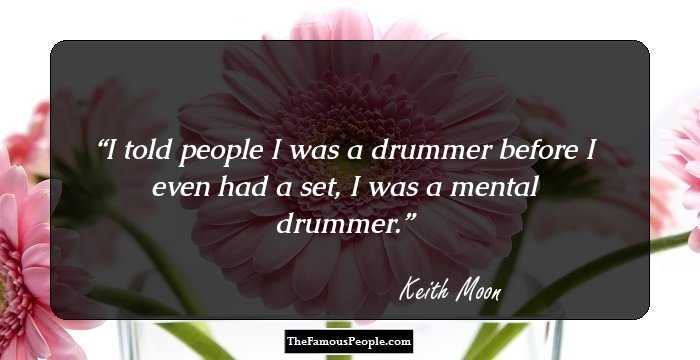 Continue Reading Below
Career
In July 1962, he performed for the first time with The Escorts. The band started getting more opportunity to perform due to his notable performance on stage. After his brief stint with this band, he joined Beachcombers.
While performing with Beachcombers, he used to attend concerts of 'The Detours’. At that time ‘The Detours’ were planning to sign a deal with Fontana Records and for this deal, this band required a new drummer.
The Detours changed their name to 'The Who' in 1964. When Moon came to know about the band’s requirement of a new drummer, he approached the band. After giving an audition, he got the opportunity to play drum for The Who.
Besides playing drum for The Who, he used to perform for The Benchcombers simultaneously. Later, he left The Benchcombers. He performed with The Who for the first time in 1962.
In January 1965, when the band’s songwriter Pete Townshend composed ‘I Can’t Explain’, he played the drum with this song. The song ‘Anyway, Anyway, Anywhere’ also features his laudable drumming.
In December 1965, the band’s album My Generation was released. For this album, he co-wrote the instrumental ‘The Ox’. This album marks his outstanding performance as a drummer.
In 1966, ‘Ready, Steady, Who’, the television performance of The Who features his singing ‘Barbara Ann’ that gained huge success in Sweden. In the same year, the band’s album ‘A Quick One’ was released.
The song titled ‘I Can See For Miles’ marks his reputation as a great drummer. In May 1969, the band’s double album ‘Tommy’ was released. This album features his singing of ‘Tommy’s Holiday Camp’ that reveals his idea of a holiday camp.
He composed ‘Dogs Part 2’, an instrumental that was released in 1969. The interesting feature of this instrumental is that instead of the sound of drumming, dog barking has been used as the lead vocal.
Continue Reading Below
His singing of ‘Cousin Kevin Model Child’ was released on the re-issue of ‘Odds & Sods’ album of The Who. During the band’s performance for the Woodstock Festival, his performance for the songs like ‘Sparks’, ‘Acid Queen’ and ‘I’m Free’ was greatly appreciated.
He sang ‘Bell Boy’ for the album ‘Quandrophenia’, which was released in 1973. In the next year, he acted in films like ‘Tommy’ and ‘Stardust’. In 1975, his solo album ‘Two Sides of the Moon’ appeared. He sang all the songs of this album. Released in 1978, the album ‘Who Are you’ features his singing of ‘Guitar and Pen’. 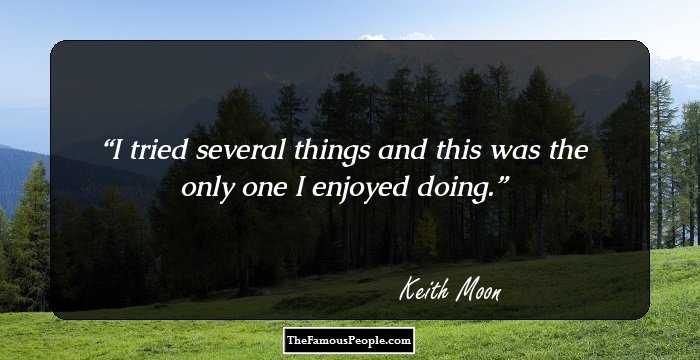 Major Works
In 1971, The Who’s album ‘Who’s Next was released. Its songs like ‘Bargain’, ‘Going Mobile’ and ‘Won’t Get Fooled Again’ marks his extraordinary performance as a drummer.
Personal Life & Legacy
In 1965, he started dating Kim Kerrigan whom he married on 17th March 1966. Their daughter Amanda was born on 12th July of the same year. The press did not know about this marriage until 1968. Both of them used to lead an extravagant social life and owned a number of cars but they led an unhappy married life due to his violent behaviour towards Kim. In 1973, Kim left him.
Later, he was involved in a relationship with Annette Walter-Lax, a Swedish model.
He used to take Clomethiazole, a sedative, on medical advice to alleviate his alcoholic withdrawal symptoms. He died of an overdose of this sedative at the age of 32. 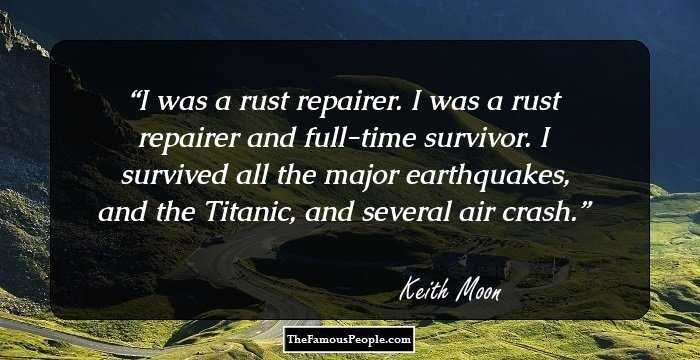 Trivia
In May 1966, this renowned drummer was severely injured when Townshend, the songwriter of the band, accidentally hit him with his guitar and delivered a blow as the drummer reached late during one of his performances.

See the events in life of Keith Moon in Chronological Order