Katheryn Winnick, born as Katerena Anna Vinitska, is a Canadian film and TV actress. She is best known for her performance in the television series ‘Bones’, ‘Vikings’ and ‘Student Bodies’. She is also recognized for appearing in many films including ‘Biohazardous’, ‘Two Weeks Notice’, ‘Going the Distance’, ‘Satan's Little Helper’, ‘Cloud 9’, ‘Amusement’, ‘Cold Souls’, ‘Love & Other Drugs’, ‘A Glimpse Inside the Mind of Charles Swan III’ and ‘The Dark Tower’. The Canadian actress has also done various television movies like ‘Trump Unauthorized’, ‘13 Graves’, ‘Tipping Point’ and ‘Law Dogs’. Winnick is also a martial arts trainer who obtained her first black belt at the age of 13. She is a licensed self-defense instructor as well as a licensed bodyguard who is known for teaching martial arts to actors on film sets. Winnick also owns a few martial arts schools. Coming to her awards and honours, the actress was nominated for multiple awards for her performance in ‘Vikings’. These included prestigious awards like Critics' Choice Television Awards, Golden Maple Awards, WIM Awards and Canadian Screen Awards. Canadian People
Canadian Actresses
Sagittarius Actresses
Actresses Who Are In Their 40s
Women Film & Theater Personalities
Career
Katheryn Winnick first appeared in the recurring role of Holly Benson in the 1999 drama ‘Student Bodies’. She then did the movies ‘Biohazardous’ and ‘Two Weeks Notice’. Then in 2003, she appeared in an episode of ‘Oz’, ‘Wild Card’ and ‘10-8: Officers on Duty’ respectively. The same year, she played the role of Julie in the flick ‘What Alice Found’. Soon after this, the actress was cast in the dramas ‘CSI: Miami’ and ‘1-800-Missing’ as well as in the movies ‘50 First Dates’, ‘Satan's Little Helper’ and ‘Going the Distance’.
Then she had a role in the film ‘Hellraiser: Hellworld’. In the year 2006, Winnick got featured in the movies ‘Cloud 9’ and ‘Failure to Launch’. The same year, she also appeared in the television movie ‘13 Graves’. The following year, she did the TV movies ‘Tipping Point’ and ‘Law Dogs’. Then she acted in the films ‘Amusement’ and ‘Cold Souls’. The Canadian actress was then cast in the role of Hannah Burley to be played in the drama ‘Bones’ in 2010.
She also appeared in a few movies namely ‘Radio Free Albemuth’, ‘Choose’, ‘Killers’ and ‘Love & Other Drugs’ in 2010. After this, she got roles in the films ‘Stand Up Guys’ and ‘A Glimpse Inside the Mind of Charles Swan III’. In 2013, Winnick joined the team of ‘Vikings’ as Lagertha. Two years later, she got featured in an episode of ’Person of Interest’. After this, she appeared in the short film ‘Stripped’ and the film ‘The Dark Tower’.
Personal Life
Katheryn Winnick was born as Katerena Anna Vinitska on December 17, 1977 in Etobicoke, Ontario, Canada, to parents Lesya Winnicki and Roman Winnicki. She has two brothers, Adam and Markjan Winnick. She completed her education from York University.

See the events in life of Katheryn Winnick in Chronological Order 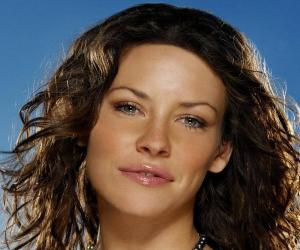