Katherine Marie Heigl is an American actor and film producer. She is best known for her role as ‘Dr. Isobel Stevens’ on ABC's medical drama ‘Grey's Anatomy’ for which she won the ‘Primetime Emmy Award’ for ‘Outstanding Supporting Actress in a Drama Series.’ She has also starred in films, such as ‘Under Siege 2: Dark Territory,’ ‘Knocked Up,’ ‘27 Dresses,’ ‘The Ugly Truth,’ ‘Killers,’ ‘Life As We Know It,’ and ‘New Year's Eve’ among others. As an actor, she does not want to be typecast as someone who plays glamorous roles, and wants to do more challenging roles. She often speaks her mind, earning both respect and criticism. She started her career as a child model with ‘Wilhelmina Models’ before turning towards full-time acting. She made her debut in the coming-of-age film ‘That Night.’ She starred as ‘Isabel Evans’ in the television series ‘Roswell’ and acted in the movie ‘My Father the Hero’ before landing her path-breaking role in‘Grey's Anatomy.’ She has appeared as a cover model on several publications, including ‘Maxim,’ ‘Vanity Fair,’ and ‘Cosmopolitan.’ On the personal front, the actor got married to singer Josh Kelley in 2007. American People
Actresses
American Women
Female Models
American Models
Childhood & Early Life
Katherine Marie Heigl was born on 24 November 1978, in Washington, D.C., USA, to Nancy, a personal manager, and Paul Heigl, a financial executive and accountant. She is the youngest of four siblings.
The untimely death of her older brother led her parents to convert to ‘The Church of Jesus Christ of Latter-day Saints’ when she was eight years old. She initially lived in Virginia and Denver, and finally settled in New Canaan, Connecticut.
When Heigl was nine, her aunt sent her photos to numerous modeling agencies. She signed with ‘Wilhelmina Models’ and made her first appearance on a TV commercial for ‘Cheerios.’
She made her film debut in 1992 when she played ‘Kathryn’ in the film ‘That Night.’ The following year, she appeared in Steven Soderbergh's drama film ‘King of the Hill.’ She dropped out of high school to pursue a career in Hollywood. 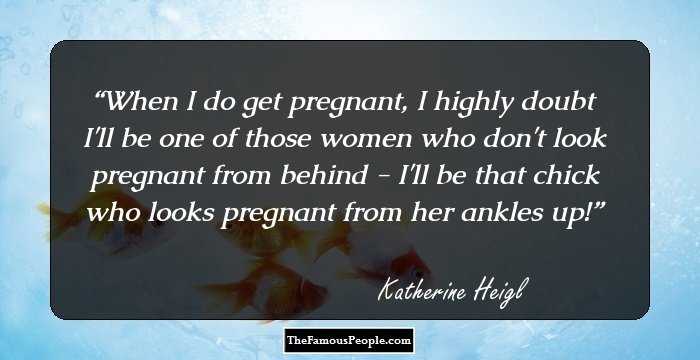 Quotes: Women
Continue Reading Below
Career
Her first lead role was in the 1994 comedy film ‘My Father the Hero’ where she played ‘Nicole Arnel,’ a teenager trying to impress a local boy.
In 1995, she appeared in Steven Seagal’s thriller ‘Under Siege 2: Dark Territory,’ portraying a teenager traveling on a train and escorted by her uncle, a counter-terrorist expert, to visit her father’s grave.
Between 1996 and 1999, she regularly modeled for magazines, had a lead role in Disney's TV film ‘Wish Upon a Star,’ and co-starred with Peter Fonda in the re-worked Shakespearean play, ‘The Tempest.’
During this time, she also appeared in films, such as ‘Stand-ins,’ ‘Bug Buster,’ ‘Bride of Chucky,’ ‘100 Girls,’ and ‘Valentine.’
In 2003, she appeared in many television movies, including ‘Evil Never Dies’ and ‘Love Comes Softly.’ She was also seen in the film ‘Descendant.’
In 2005, she acted in the comedy film ‘The Ringer’ and starred as ‘Romy’ in the television movie ‘Romy and Michele: In the Beginning,’ a prequel to the film ‘Romy and Michele's High School Reunion.’
The same year, she was cast as ‘Isobel Stevens’ in the popular medical drama series ‘Grey’s Anatomy,’ which turned out to be one of her most popular roles.
She played the lead role in the 2005 movie ‘Side Effects.’ Heigl was also the executive producer of the movie.
In 2007, she starred alongside Seth Rogen, Paul Rudd, and director Judd Apatow's wife Leslie Mann in the movie ‘Knocked Up.’ The movie was a critical and commercial success.
Continue Reading Below
She starred in the film ‘27 Dresses’ which received mixed reviews from critics. This 2008 romantic comedy film was directed by Anne Fletcher and written by Aline Brosh McKenna.
In the 2009 romantic comedy ‘The Ugly Truth,’ she played ‘Abigail "Abby" Richter,’ a romantically challenged morning show producer, opposite Gerard Butler, who portrayed ‘Mike Chadway,’ her male bigot correspondent.
In 2010, she produced and played lead role in the film ‘Life As We Know It.’ The next year, she appeared in the romantic comedy ‘New Year's Eve.’
In ‘The Big Wedding,’ a 2013 romantic comedy, she shared screen-space with Robert De Niro, Diane Keaton, Susan Sarandon, and Robin Williams. The film was a critical and commercial failure.
In the erotic thriller ‘Unforgettable’ (2017), she starred alongside Rosario Dawson and Geoff Stults. In the animated comedy film ‘The Nut Job 2: Nutty by Nature,’ which released theatrically on August 11, 2017, she reprised her role as ‘Andie.’
In 2018, Heigl joined the cast of the legal drama series ‘Suits’ where she played the main role of ‘Samantha Wheeler.’ The following year, she was cast to play ‘Tully Hart’ in the drama web television series ‘Firefly Lane.’ 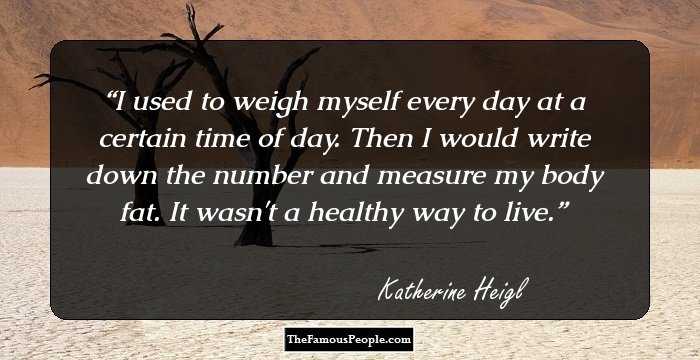 Quotes: Time
Major Works
Her role as ‘Dr. Isobel Stevens’ on ABC's medical drama series 'Grey's Anatomy' is one of her most popular roles. The series ran for five years from 2005 to 2010, and won her a ‘Primetime Emmy Award.’
Awards & Achievements
In 2007, she won the ‘Primetime Emmy Award’ for ‘Best Supporting Actress’ for ‘Grey’s Anatomy.’ 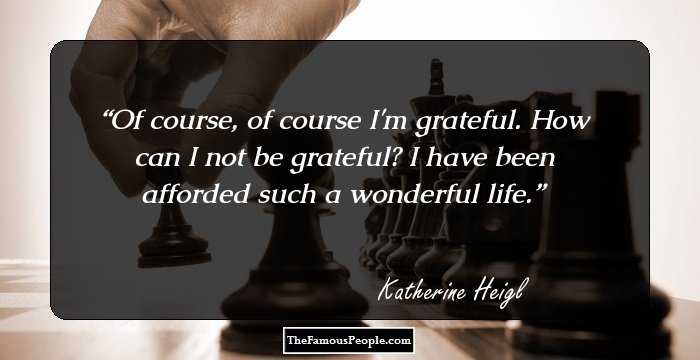 Quotes: Life
Personal Life & Legacy
Heigl married singer Josh Kelley in 2007. In 2009, they adopted Nancy Leigh, a South Korean baby girl with a congenital heart problem. They also adopted a girl named Adelaide Marie Hope in 2012.
A passionate dog-lover, Heigl worked with ‘Best Friends Animal Society’ on several projects. Her organization, ‘Heigl's Hounds of Hope,’ rescues dogs with behavior problems from shelters and rehabilitates them.
On June 2016, Kelley and Heigl announced that they were expecting their first biological child. Heigl gave birth to her son Joshua Bishop on December 20, 2016.
Trivia
This beautiful and talented actor has played characters with the name ‘Isabel’ or ‘Isobel’ thrice. She has played such characters in ‘Grey's Anatomy,’ ‘Roswell,’ and ‘Wuthering Heights.’

Quotes By Katherine Heigl | Quote Of The Day | Top 100 Quotes

See the events in life of Katherine Heigl in Chronological Order