Julia O'Hara Stiles is an American actress who started her acting career at the age of 11. Beginning her journey with stage and television appearances, she soon landed prominent roles in teen classic films. She made her acting debut at ‘La MaMa Theatre Company.’ She then worked on several other theatre productions, portraying prominent characters in plays like ‘The Vagina Monologues,’ ‘Twelfth Night,’ and ‘Oleanna.’ She made television appearance in the early-90s with the series ‘Ghostwriter’ where she essayed the role of ‘Erica Dansby.’ She went on to appear in single episodes of several other series and was nominated for ‘Primetime Emmy Award’ and the ‘Golden Globe Award’ for her performance in the TV series ‘Dexter’ in which she played ‘Lumen Pierce.’ She made her film debut in 1996 with a small part in the film ‘I Love You, I Love You Not.’ Her big breakthrough came in 1999 when she played ‘Kat Stratford’ in the movie ‘10 Things I Hate About You.’ Her acting career progressed as she continued landing lead roles in films, such as ‘Save the Last Dance,’ ‘The Business of Strangers,’ ‘Mona Lisa Smile,’ and ‘The Omen.’ American People
American Women
New Yorkers Actresses
Columbia University
Aries Actresses
Childhood & Early Life
Julia Stiles was born on March 28, 1981, in New York City, New York, USA, to John O'Hara and Judith Newcomb Stiles. She has two younger siblings. Her mother is a potter and her parents owned a pottery business in Greenwich Village.
She was a bright child. At the age of six, she contributed to her family business by handling the register and interacting with customers. Her love for theatre developed as she often accompanied her parents to watch plays. She was especially fascinated by the Shakespearean plays.
She also developed a passion for writing during her childhood; she would often write letters to her parents specifying her requirements. When she was 11, she wrote a letter to Ed Koch, the then mayor of New York City, requesting him to place more dustbins on the streets. She also wrote a letter to the director of ‘La MaMa Theatre Company’ which eventually landed her a role in one of the company’s plays when she was only 11 years of age.
Though she did not take her academic education forward, she joined ‘New York's Professional Children School’ and took modern dance lessons to develop her artistic skills so as to pursue a career in the entertainment business. 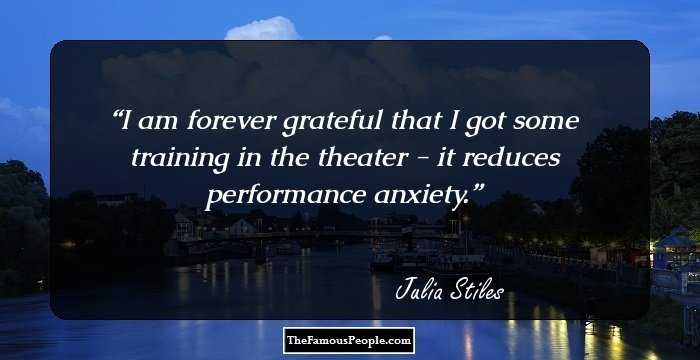 Who Is The Most Popular BTS Member?
Career
She started her acting career on stage, working with the ‘La MaMa Theatre Company’ at the age of 11. At the age of 12, she worked with ‘Kitchen Theatre’ and performed in plays, such as ‘The Sandlewood Box’ and ‘Matthew: School of Life.’ She also did several commercials.
Her initial works from 1993 to 1998 include plays produced at ‘Ridge Theatre’ where she enacted the works of John Moran.
She made her television debut in 1993 with the series ‘Ghostwriter’ where she essayed the role of ‘Erica Dansby’ in six episodes. From the mid-1990s to 2000s, she did single episodes of several TV series, including ‘Promised Land’ (1996), ‘Chicago Hope’ (1997), ‘Punk’d’ (2004), and ‘The City’ (2009). She also did two episodes of ‘Saturday Night Live’ (2001).
She made her film debut with a small part in the film ‘I Love You, I Love You Not’ (1996). She then played ‘Bridget O'Meara’ in ‘The Devil’s Own’ (1997), starring alongside Harrison Ford.
After appearing in a couple of films, she landed the lead role of ‘Ellie Christianson’ in the 1998 film ‘Wicked’ and earned the ‘Best Actress Award’ at the ‘Karlovy Vary International Film Festival.’ Although the film was never screened in theatres, she received positive response from the critics and was noticed by casting agents.
Her big breakthrough came in 1999 with ‘10 Things I Hate About You,’ a film adapted from Shakespeare's ‘The Taming of the Shrew.’ The film became a hit while Stiles won the ‘MTV Movie Award’ and ‘Chicago Film Critics Association Award’ apart from several other nominations.
She then appeared in the comedy film ‘Down To You’ (2000) which could not garner success. However, the film earned her the ‘Teen Choice Award’ for ‘Choice Movie Chemistry’ along with her co-star Freddie Prinze Junior.
Her next significant movie was ‘Save the Last Dance’ (2001) where she essayed the role of ‘Sara Johnson.’ Her portrayal of ‘Sara’ is considered her most remarkable performance till date. The film was a box-office success and won her two ‘Teen Choice Awards’ and a ‘MTV Movie Award’ for ‘Best Kiss’ which she shared with Sean Patrick Thomas.
In 2001, she also appeared in ‘The Business of Strangers’ where she played the challenging role of ‘Paula Murphy’ for which she earned a nomination at the ‘Satellite Award’ for ‘Best Supporting Actress.’
Continue Reading Below
Apart from acting in films and TV series, she also continued performing in theatre. From July to August 2002, she appeared in Eve Ensler’s play ‘The Vagina Monologues.’ She also essayed the lead role of ‘Viola’ in ‘Twelfth Night,’ a ‘Shakespeare in the Park’ production.
In 2002, Julia Stiles played a small but significant role as ‘Nicky Parsons’ in ‘The Bourne Identity,’ the first of the ‘Bourne’ film series. She would go on to appear in other ‘Bourne’ films, such as ‘The Bourne Supremacy’ (2004) and ‘The Bourne Ultimatum’ (2007). The latter remain her highest grossing film till date.
Her career progressed further in the 2000s as she showcased her versatility with films, such as ‘Mona Lisa Smile’ (2003), ‘The Prince and Me’ (2004), ‘The Omen’ (2006) and ‘The Cry of the Owl’ (2009).
In 2004, she performed as ‘Carol’ in ‘Oleanna,’ a play by David Mamet at the ‘Garrick Theatre.’ It was her first ever stage performance in London. In 2009, she reprised her role as ‘Carol’ at the ‘Mark Taper Forum’ under the direction of Doug Hughes.
She wrote and directed a short film titled ‘Raving’ (2007) which marked her directorial debut. The film starring Zooey Deschanel and Bill Irwin was premiered at the ‘Tribeca Film Festival’ and is available on ‘Elle’ magazine’s website.
She was nominated for the ‘Primetime Emmy Award’ and ‘Golden Globe Award’ for her performance as ‘Lumen Pierce’ in ten episodes of the popular TV series ‘Dexter.’
From 2012 to 2015, she starred in the web drama series ‘Blue’ which was also aired on television.
Meanwhile in 2014, she essayed the character of ‘Jessica Lieberstein’ in the television comedy series ‘The Mindy Project.’
From 2012 to 2015, Julia Stiles also appeared in films like ‘Silver Linings Playbook’ (2012), ‘Between Us’ (2013), ‘Out of the Dark’ (2014), and ‘Go with Me’ (2015).
Continue Reading Below
Stiles went on to reprise her role as ‘Nicky Parsons’ in ‘Jason Bourne,’ the fifth installment of the ‘Bourne’ franchise in 2015.
She was then seen in the 2016 comedy-drama film ‘The Great Gilly Hopkins’ where she played ‘Courtney Rutherford Hopkins,’ the wayward mother of ‘Gilly Hopkins,’ played by Sophie Nélisse.
Stiles appeared in the movie ‘Hustlers’ where she played a journalist named ‘Elizabeth’ in 2019. The same year, she was cast to play ‘Dr. Jordan Taylor’ in Austin Stark's drama film ‘The God Committee.’ 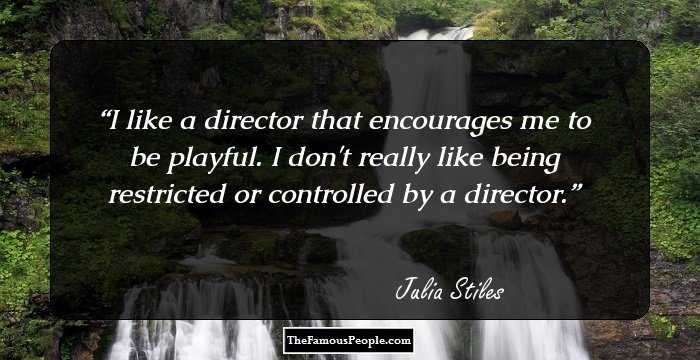 Personal Life & Legacy
In 2000, she joined the ‘Columbia University’ and earned a bachelor’s degree in English in 2005. In 2010, the ‘Columbia College Alumni Association’ honored her and four other alumni with the ‘John Jay Award’ for their professional achievements.
She dated actor, director, and filmmaker Joseph Gordon-Levitt. She also dated artist Jonathan Cramer. In July 2011, she started dating actor David Harbour.
She is a self-proclaimed feminist and has penned down several essays on the subject for ‘The Guardian,’ a British newspaper.
Julia Stiles announced in January 2016 that she got engaged to Preston J. Cook. In September 2017, they got married and are blessed with a son.
Humanitarian Work
She has been active as a social and political activist. She is a proponent of the nonprofit organization ‘Habitat for Humanity International’ (HFHI). As part of her work with the organization, she helped build housing in Costa Rica.
She has also worked with ‘Amnesty International’ in order to increase awareness of the hard conditions of the unaccompanied juveniles who face immigration detention. Her trip to Leesport, Pennsylvania, to witness the situation at the ‘Berks County Youth Center’ was featured in ‘Marie Claire’ in January 2004. 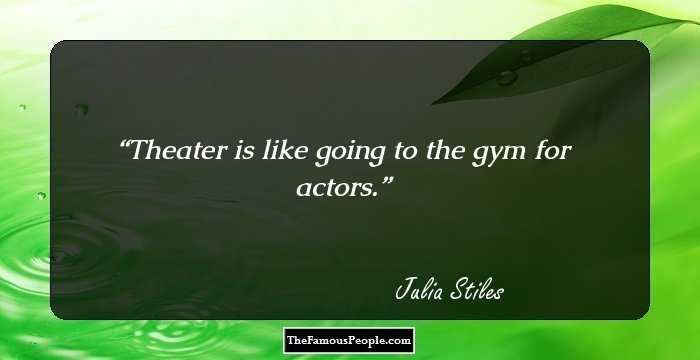 Quotes By Julia Stiles | Quote Of The Day | Top 100 Quotes

See the events in life of Julia Stiles in Chronological Order