David Jude Heyworth Law is an English actor who earned international acclaim for his role of Dickie Greenleaf in the 1999 movie ‘The Talented Mr. Ripley’ for which he was awarded the ‘BAFTA Award for the Best Actor in a Supporting Role’ and nominated for an Academy Award and Golden Globe Award. He is also known for playing Pope Pius XIII in the television miniseries ‘The Young Pope’ and for making minor appearances in the programs ‘Families’, ‘The Case-Book of Sherlock Holmes', and 'Saturday Night Live.' He was naturally inclined towards acting from a young age and actively participated in his school stage productions. He was just a teenager when he realized his calling and dropped out of school to pursue an acting career. Despite being handsome and talented, his initial years were filled with struggles. After several lukewarm performances, he finally began to enjoy success as a film star. In addition, the actor has an accomplished career on stage as well and has acted in numerous Broadway and West End productions including 'Joseph and the Amazing Technicolor Dreamcoat' and 'The Fastest Clock in the Universe.' With his impeccable acting skills, Law has done justice to almost every role he has played till date. The actor is also known for his benevolent nature; Law is a peace advocate and once participated in road protests against Alexander Lukashenko. British People
British Men
British Actors
Capricorn Actors
Actors Who Are In Their 40s
Childhood & Early Life
Jude Law was born on 29 December 1972 in Lewisham, London, England, to Margaret Anne (Heyworth) and Peter Robert Law. Both his parents worked as teachers at comprehensive schools. After a few years, his father became a headmaster. Jude has one sister, Natasha.
He attended John Ball Primary School and the Kidbrooke School. Later, he was enrolled at the Alleyn's School where he developed an interest in acting. 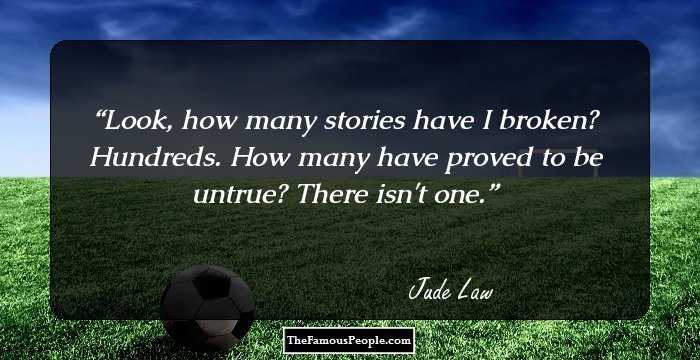 Continue Reading Below
Career
Jude Law began acting in 1987 with the National Youth Music Theatre and appeared in the play ‘Bodywork’. He then had various roles in the play ‘The Ragged Child’ in 1988. That year, he also appeared in the play ‘The Little Rats’.
Soon after this, the actor was cast in the play ‘Joseph and the Amazing Technicolor Dreamcoat’ and in the TV film ‘The Tailor of Gloucester’ in 1989.
He had a minor role in the TV soap opera ‘Families’ in 1990. The following year, he appeared in an episode of the TV series ‘The Case-Book of Sherlock Holmes’. In the year 1992, he got featured in the productions of ‘The Fastest Clock in the Universe’ and ‘Pygmalion’ as well as in the short film ‘The Crane’.
The English actor then went on to act in the play ‘Death of a Salesman’ (1993) that was staged at the West Yorkshire Playhouse. After this he had his breakthrough role in the crime drama film ‘Shopping’ in 1994. That year, Law also appeared in the West End production ‘Les Parents terribles’, a play directed by Sean Mathias.
In 1997, he gained more fame with his role in the biopic ‘Wilde’ and for playing Billy Carl Hanson in the flick ‘Midnight in the Garden of Good and Evil’. The following year, he appeared in the films ‘Music from Another Room’, ‘Final Cut’ and ‘The Wisdom of Crocodiles’.
In 1999, the actor was cast as Dickie Greenleaf in the movie ‘The Talented Mr. Ripley’. Then in 2001, he played Vasily Zaytsev in the movie ‘ Enemy at the Gates’ as well as Gigolo Joe in the flick ‘A.I. Artificial Intelligence’.
Jude Law was featured in the drama movie ‘Road to Perdition’ in 2002 and also directed an anti-fur cinema commercial that featured several artists including Law, George Michael, Helena Christensen, Moby, and Chrissie Hynde.
After appearing in the 2003 flick ‘Cold Mountain’, Law was featured as Errol Flynn in the film ‘The Aviator’ the following year. During 2006 and 2007, the English artist did the films ‘All the King's Men’, ‘Breaking & Entering’, ‘The Holiday’, ‘My Blueberry Nights’ and ‘Sleuth’.
A few years later, he got the opportunity to play Dr. John Watson in the English-American action film ‘Sherlock Holmes’. He also appeared in the lead role in the play ‘Hamlet’ in 2009.
Continue Reading Below
From 2010 to 2012, Law did many big screen and stage projects including ‘Repo Men’, ‘Contagion’, ’Hugo’, ‘Sherlock Holmes: A Game of Shadows’, ‘360’, ‘Anna Karenina’ and ‘Anna Christie’.
Between 2013 and 2014, he played Henry V in the production of ‘Henry V’. During this time, he also appeared in the films ‘Side Effects’, ‘Dom Hemingway’, ‘The Grand Budapest Hotel’ and ‘Black Sea’.
Law acted in the play ‘The Vote’ and appeared in an episode of ‘Toast of London’ in 2015. The following year, he joined the cast of the drama ‘The Young Pope’ as Pope Pius XIII. Then he portrayed roles in the play ‘Obsession’ and in the movie ‘King Arthur: Legend of the Sword,’ both in 2017. 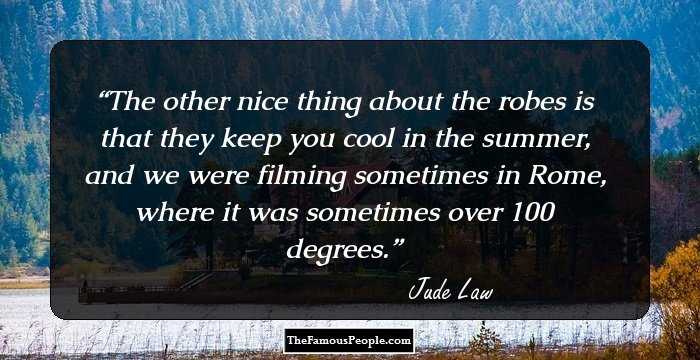 Major Works
In 2004, Jude Law played the protagonists in the movies ‘Alfie’, ‘Sky Captain and the World of Tomorrow’ and ‘Lemony Snicket's A Series of Unfortunate Events.’ All of these movies were well-received by the audiences and critics and helped him establish himself as a mature character actor.
His role as Pope Pius XIII in the TV drama series ‘The Young Pope’ was much appreciated. The series was reviewed very positively in the UK, Ireland, and Italy. The actor’s powerful performance earned him the Fondazione Mimmo Rotella Award.
Awards & Achievements
In 1995, Jude Law earned the ‘Theatre World Award’ for his performance in ‘Indiscretions.’
In 1999, he won the BAFTA Award for Best Actor in a Supporting Role for his role in the movie ‘The Talented Mr. Ripley.’
Law won the ‘President's Prize’ at ‘Karlovy Vary International Film Festival’ in 2010. That year, he also received the ‘South Bank Show Award’, the ‘Whatsonstage.com Award’ as well as the ‘Falstaff Award’ for Best Leading Actor for his performance in the play ‘Hamlet.’
Continue Reading Below 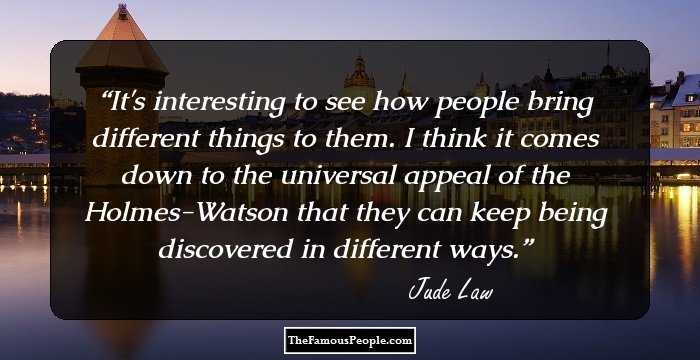 Personal Life
Jude Law was married to actress Sadie Frost from 2 September 1997 to 29 October 2003. The couple has two sons and a daughter.
After his divorce, the actor started dating his co-star Sienna Miller. However, the couple parted ways in 2006.
In 2009, Law became a father for the fourth time. His daughter Sophia was born from a brief relationship the actor had with model Samantha Burke. That year, Law also rekindled his relationship with Miller. However, both parted ways once again in February 2011.
In October 2014, the English artiste announced that Catherine Harding was about to give birth to his fifth kid, claiming at the same time that they both were "no longer in a love relationship". The couple’s daughter Ada was born in 2015.
Law is associated with several charitable organizations and supports numerous different foundations, causes, and events. Some of the organizations he has been linked to are: Make-A-Wish Foundation, Breast Cancer Care, and Make Poverty History.
Trivia
Law is named after both the song ‘Hey Jude’ and the book ‘Jude the Obscure.’
He was listed in People Magazine’s ‘Sexiest Man Alive’ list of 2004.
Both of the actor’s parents were orphans.

See the events in life of Jude Law in Chronological Order