Age is probably just a number for Josephine Skriver, the Danish supermodel whom the world just adorns! At merely 24, she has already walked the ramp for top fashion designers and brands and has been the face of advertising campaigns of some of the most reputed fashion houses. More than 300 fashion shows and almost as many advertising campaigns old, Skriver can be rated as the top/leading supermodel in the world of fashion. She has modelled for some of the world’s biggest fashion brands. Furthermore, she has been on the cover of and featured in editorials of numerous magazines, such as Marie Claire, Vanity Fair, V Magazine, Interview, L'Officiel, Vs., W, Allure, Italian, German, Russian, Chinese, Japanese, Australian, Brazilian, Spanish and American Vogue as well as Danish, Italian, Brazilian, Swedish, French Elle and UK, Polish, Mexican, Arabian and American Harper's Bazaar. Modelling apart, being an IVF child born to gay parents, Skriver is a fervent advocate of LGBT community. She continuously supports the community and fervently works for their causes. An optimistic girl, Skriver often says that her story wouldn’t be of interest to people soon as people would accept LGBT community and their families as any other traditional or normal family. Michelle Hunziker
4th April In History
DID WE MISS SOMEONE?
CLICK HERE AND TELL US
WE'LL MAKE SURE
THEY'RE HERE A.S.A.P
Quick Facts 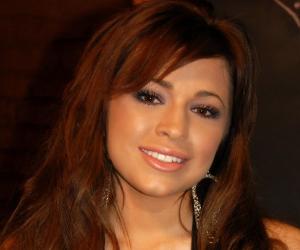 Michelle Hunziker
Career
One look at Skriver and you would agree that she looks angelic and pure. While her perfectly-shaped body makes her a favourite of ramps and walkways, her to die-for looks has earned her a contract with top brands. Though officially her modelling career started in 2011, not many know that Skriver was in fact a born talent! As an infant, she appeared in a Danish commercial for Pampers commercials. Having said that, it was only natural for Skriver to take up modelling as she grew up! It was while on a trip to New York with her soccer team that Skriver was discovered and approached by a modelling agency who pursued her to take up modelling professionally. Hardly 15 then, she later signed a contract with Unique Models, an international modelling agency based in Copenhagen. Though Skriver was approached by other agencies as well, she wanted to finish her studies before taking up modelling full-time.
In 2011, upon finishing school, Skriver began pursuing her modelling career. Her debut season, the Fall/Winter 2011, saw her open for Alberta Ferretti and close for Prada. In between, she walked the ramp for many prominent designers including Calvin Klein, Gucci, Dolce & Gabbana, DKNY, Christian Dior and so on. Since 2013, she has been a Victoria's Secret lingerie model and in February 2016 became a Victoria's Secret Angel. Just half a decade into her career, Skriver has already cat-walked in over 300 fashion shows. What’s more, she has been a prominent feature of as many advertising campaigns of top brands from Chanel to Michael Kors, DKNY to Tommy Hilfiger, MAC to Calares and so on. Her supermodel status that she enjoys today is both due to the quality and quantity of her work and modelling and advertising assignments.
Continue Reading Below
Personal Life
Josephine Skriver was born on April 14, 1993 in Copenhagen, Denmark to an IT analyst mother and marine biologist father. She has a younger brother, Oliver. Both her parents were gay and as such, both the children were conceived through IVF. Being an IVF child meant nothing for her, but time and again, society pointed out to the fact and made her feel ‘different’. Skriver’s family was broadminded, both her parents openly accepting and talking about their sexual stance rather than keeping it in the wraps. Her lesbian mother and gay father married their respective partners which gave her an additional set of parents whom she adorned. Instead of calling them step parents, she called them ‘bonus’ parents.
Josephine Skriver has frequently stated that she is extremely grateful to be born in such a loving family with giving parents with whom she shares a strong bond of love. Through her social media accounts, she often displays her love and affection for her parents and sibling brother. Over the years, Skriver has been an ardent supporter of LGBT community and has on numerous occasions spoken candidly about their rights. In 2015, Skriver was made a celebrity ambassador for the Family Equality Council and its Outspoken Generation Program, which aims to raise awareness about LGBTQ families. Apart from modelling, Skriver is a soccer player. Since 2013, Skriver has been in a relationship with American singer-songwriter and lead vocalist of The Cab, Alexander DeLeon. In 2014, the duo modelled in a fashion spread for Elle Italia.