Jonathan Daviss is an American actor who is best known for his performance as Pope in the 2020 Netflix series Outer Banks. Jonathan is from Conroe, Texas, and later moved to Los Angeles, California, to pursue a career in acting. He initially worked as a sales executive with an insurance company. He later plunged into full-time acting with the 2013 series Revolution. After appearing in Deliverance Creek, Shattered Memories, and Age of Summer, he bagged the role of Pope Heyward in Outer Banks. Jonathan also supports many social causes, such as the BLM movement. 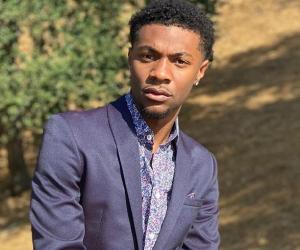 Jaeden Lieberher
Actors #4289
Film & Theater Personalities #9655
DID WE MISS SOMEONE?
CLICK HERE AND TELL US
WE'LL MAKE SURE
THEY'RE HERE A.S.A.P
Quick Facts

Jonathan Daviss was born on February 28, 2000, in Conroe, south of Houston, Texas, United States of America.

He later moved to Los Angeles, but his parents still live in Conroe. His mother, Yulanda Creamer-Daviss, works in an insurance company, while his father, Jonathan Daviss Sr., is a real-estate agent. Jonathan grew up with his three sisters, Jillian, Jasmine, and Jaden.

Jonathan studied at the Conroe High School in Texas. He was a start on the football team of the school. He led his district in special team tackles. He was also interested in other sports and played as part of a little league baseball team.

He was part of his school’s AV team, too, and made a short film. It took them a year to complete the project.

He then completed his graduation from Santa Monica College. Following this, he attended drama classes and was trained in acting. It was not easy for Jonathan to make the transition to acting, as where he lived, black kids usually tried moving out to bigger cities through sports or other scholarships or plunged into more traditional careers, such as engineering.

When Jonathan Daviss initially moved to Los Angeles to pursue a career in the entertainment industry, he slept on a friend’s couch for days, as he had run out of money. He then took up a job as a sales associate at Saks Off 5th, while also charging Bird scooters part-time.

His debut role was that of a kid in the 2013 series Revolution. He then appeared as Samuel Washington in the 2014 TV movie Deliverance Creek. In 2017, he was Young Spike in the short All the Marbles.

In 2018, he was seen as Jay Tibbs in Edge of the World, as Mathis in Age of Summer, and as Teddy in the TV movie Shattered Memories.

He was also cast as Lavar in the series Baselines and has been part of the 2020 series Popternative.

However, the role that made him a household name was that of Pope Heyward in the 2020 Netflix series Outer Banks. The series was released on April 15, 2020. In July 2020, the makers announced a second season, but the filming has currently stopped for the ongoing COVID-19 pandemic.

While describing his character, Jonathan once said he was doubtful about being cast as Pope, as the character seemed “super-duper nerdy.”

Jonathan also describes the character as “loyal,” “awkward,” and “sweet.” However, with time, Pope’s character revealed many dimensions. Jonathan says Pope’s character was deliberately not showcased as a typical black character, to prevent any sort of racial stereotyping. Pope is a surfer who is “funny and can do dangerous stuff.”

Jonathan Daviss shares a deep connection with E. Roger Mitchell, who plays Pope’s father, Heyward, in the series. The series also stars Chase Stokes, Madelyn Cline, and Madison Bailey, and Jonathan has made great friends on the set.

Jonathan Daviss as a Person

Apart from being an actor, Jonathan Daviss plays the guitar and has been spending most of the COVID-19 quarantine period playing the instrument at home.

One of his favorite movies is the 2000 animated film The Road to El Dorado, which narrated the tale of two con-artists looking for treasure in the mythical city of El Dorado.

Jonathan has a scar on his toe. He got the scar as a child, when an iron fell on his foot accidentally.

He loves relaxing and hiking with his friends. He also enjoys beachside vacations and was thrilled to be able to learn to drive a boat during the filming of Outer Banks.

He also adores comic books and anime. He is especially fond of Kakashi Harate from the Naruto series. Jonathan and his sister had dressed up like the character during a family trip to Florida. Jonathan once took his family to a Naruto-themed restaurant in Orlando, named Naroodle.

Jonathan is a big fan of actor, rapper, and content creator Donald Glover and wishes to be like him someday.

He is also a vocal supporter of many social causes, one of them being the Black Lives Matter (BLM) movement. He feels the issue of George Floyd’s death is very close to his heart, as George was from his hometown and his funeral was held at a church where Jonathan has been to several times. Jonathan recalls that his father had once told him that after he turns 14, he is at the risk of being killed by the police just because he is a “young black man.”

Jonathan’s late aunt Jewel was an activist, and she taught him the importance of voting from a young age. She was the one who had inspired him to be socially aware. This led him to support movements pushing for racial equality and educating people on the significance of voting.

It is believed Jonathan is single, as there is no mention of any girlfriend, either former or present, on any of his social-media accounts.

His promotes various social causes through his social-media accounts. For instance, his Instagram promotes reclaimtheblock.org and the Justice for Breonna movement. Reclaim the Block is a Minneapolis-based movement that drives city council members to move money from the police department to other areas of the city’s development budget.

On June 16, 2020, Jonathan promoted COVID-19 masks made by Kimia Janesar, on Instagram, claiming that all profits from the sales would be donated to the BLM Loveland foundation.

On July 15, 2020, Jonathan Daviss posted on Instagram that he had partnered with Voss Water to donate water to frontline workers at the Riverside Community Hospital, in the wake of the COVID-19 pandemic.

Jonathan has also featured his sisters and mother on his social-media profiles.

See the events in life of Jonathan Daviss in Chronological Order