(One of the Highest Paid TV Actors in the World)

Advanced Search
John Mark Galecki also known as Johnny Galecki is a popular American actor, best known for performances in sitcoms 'Roseanne' and 'The Big Bang Theory'. Johnny Galecki was known to have a passion for acting from a very early age and he made his debut in the profession through theatre at the age of seven. He began his professional acting career when he was 12 years old. Even though he has appeared in a variety of roles in feature films, it is television that gave him much fan-following and appreciation. He is well accepted by audience for his portrayal of nerds or ‘techie’ characters onscreen. Though he has not undergone formal college education, Johnny Galecki opines that one should never stop learning and absorbing; therefore, he learnt to play the instrument cello during his early twenties. John Galecki’s hobbies include painting, hiking and music. A biking enthusiast, he is known to have had a collection of motorbikes, most of which he gave away upon coming to Hollywood. Image Credit
https://www.youtube.com/watch?v=lLyzYdEpI3Q
( Behind the Brand)

American People
American Men
Taurus Actors
American Actors
Actors Who Are In Their 40s
Childhood & Early Life
Johnny Galecki was born on 30 April 1975 to Mary Lou Noon, mortgage consultant, and Richard Galecki, who was a member of the US Air Force. He was born in a city named Bree in Belgium. His family moved to Chicago when he was three years old and he grew up in Illinois.
Johnny Galecki has two younger siblings; a brother Nick Galecki who works in the automotive industry, and a sister Allison Galecki. Johnny lost his father at the age of 16 in a car accident. 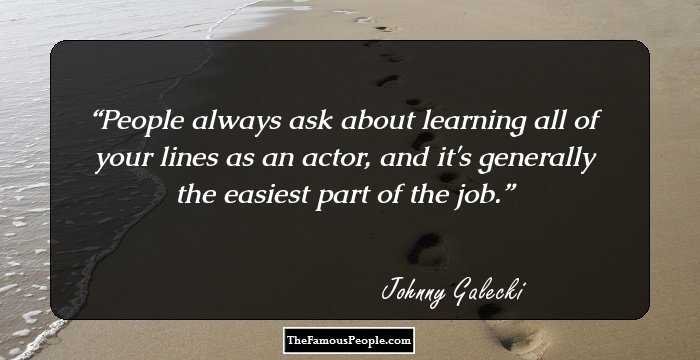 Quotes: Learning
Continue Reading Below
Career
Johnny Galecki was interested in acting from an early age and started appearing in productions at Chicago's Goodman Theater by the age of seven.
In 1988, he made his first appearance on the big screen in the movie ‘A Night in the Life of Jimmy Reardon’. The next year he acted in the movie ‘Prancer’ and ‘National Lampoon's Christmas Vacation’, through which he garnered a lot of attention. During this time he along with his family shifted to Los Angeles to make his career in the show business, however, after a while, his family returned to Chicago and he stayed back to build a career for himself.
In 1990, he signed his first television series project ‘American Dreamer’ which starred actor Robert Urich. However, the show did not succeed as expected and went off air mid-season.
The following years, he made short appearances in TV series like an episode for ‘Blossom’ in 1991 and 13 episodes for ‘Billy ‘in 1992. He was also offered several minor roles in movies like ‘Blind faith’ (1990), ‘In Defense of a Married Man’ (1990) and made for TV movie ‘Backfield in Motion’ (1991).
In 1992, Johnny Galecki was offered a role in one of the most popular television shows of the time – ‘Roseanne’, in which he was cast as the boyfriend turned husband of Roseanne’s daughter. His portrayal of the character grabbed the attention of viewers and he was subsequently signed for the remaining five seasons of the show that went on till 1997.
During this time Johnny Galecki got the opportunity to portray a wide range of characters in feature films as well. A few of the roles he played are as humorous Ira in ‘Suicide Kings’ (1997), gay roles in ‘The Opposite of Sex’ (1998) and ‘Bounce’ (2000), and drug addict in ‘Bookies’ (2003). He also played minor roles in popular movies like ‘Bean’ (1997), ‘I Know What You Did Last Summer’ (1997), and ‘Vanilla Sky’ (2001).
Johnny Galecki continued appearing in the small screen, predominantly in guest roles for one or a few episodes in television shows like ‘The Norm Show’ (2000), ‘LAX’ (2004), ‘My Name is Earl’ (2004) ,‘Hope & faith’ (2005) and ‘My Boys’(2006-2007). Towards the end of 2006, he appeared in the Off-Broadway production of Carter Beene’s satire ‘The Little Dog Laughed’ as a male escort. This was the only new American play to feature on Broadway during that season and got great reviews.
In 2007, he returned to television with the first season of ‘The Big Bang Theory’ as Dr. Leonard Leakey Hofstadter Ph.D. – an experimental physicist. His portrayal of the character was well received and he has received multiple award nominations for the same. The show is running its ninth season as on 2015.
Johnny Galecki has made brief appearances in movies ‘Hancock’ (2008) alongside Will Smith, and ‘In Time’ (2011) with Justin Timberlake and Amanda Seyfried.
Continue Reading Below 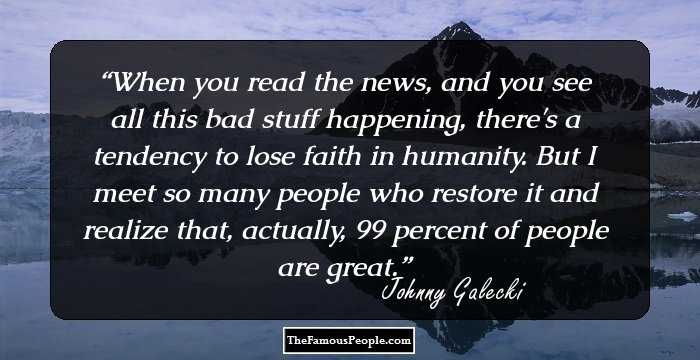 Quotes: You
Major Works
John Galecki is best known for his performances on television. His character David Healy in ‘Roseanne’ brought him into the limelight whereas his portrayal of Dr Leonard Hofstadter in ‘The Big Bang Theory’ earned him much fan-following.
Awards & Achievements
He won the ‘Best Youth Comedian’ category of the Young Artist Award in 1993 for his character in ‘Roseanne’.
In 2012, Johnny Galecki won the Satellite Award for ‘Best Actor in a Series, Comedy or Musical’. 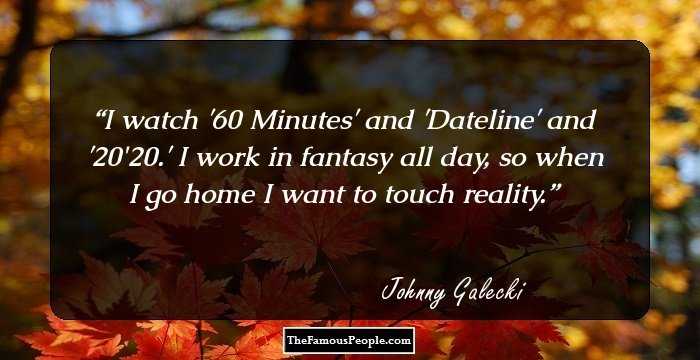 Quotes: Home
Personal Life & Legacy
Johnny Galecki began dating ‘The Big Bang Theory’ co- star actress Kaley Cuoco in 2007. The couple terminated their relationship in 2009 in an amicable manner.
In 2012, he was romantically linked with actress Kelli Garner. However, the relationship ended in 2014.
He is said to be dating Alaina Meyer, who is half his age. The couple has been spotted together at several events.

Quotes By Johnny Galecki | Quote Of The Day | Top 100 Quotes

See the events in life of Johnny Galecki in Chronological Order