Joe Trohman, born as Joseph Mark Trohman, is an American musician and record producer. He is famous as the lead guitarist as well as the backing vocalist of the rock band named ‘Fall Out Boy’. He is also known for being the lead guitarist of the heavy metal supergroup ‘The Damned Things’. The singer, along with Fall Out Boy, has worked on many super hit albums, such as ‘From Under the Cork Tree’, ‘Take This to Your Grave’, ‘Folie à Deux’ and ‘Infinity on High’, to name a few. With the Damned Things, the American musician released the album ‘Ironiclast’. Trohman has also worked with bassist Josh Newton and has released the EP ‘Schadenfreude’ for the band ‘With Knives’. Coming to his career as a songwriter, Trohman has written/co-written many songs including ‘Alone Together’, ‘Centuries’, ‘Irresistible’, ‘Uma Thurman’ and ‘The Phoenix’. The multitalented personality has even designed a guitar named ‘Joe Trohman Washburn Idol’ for Washburn Guitars. Skrillex
Guitarists #741
Musicians #3286
Continue Reading Below
1st September In History
DID WE MISS SOMEONE?
CLICK HERE AND TELL US
WE'LL MAKE SURE
THEY'RE HERE A.S.A.P
Quick Facts

American People
Florida Musicians
Virgo Musicians
Male Musicians
Virgo Guitarists
Career
Joe Trohman started his music career at the age of sixteen when he joined a local band and began touring with it as its bassist. Then he, along with Patrick Stump, Pete Wentz, and Andy Hurley formed the rock band ‘Fall Out Boy’. This band released its album ‘From Under the Cork Tree’ in 2005 through Island Records. This album was a super hit and ultimately helped the band achieve mainstream success. The album charted at #9 on the US Billboard 200 chart and achieved double platinum status. With its hit songs ‘Sugar, We're Goin Down’ and ‘Dance, Dance’, this album ruled the music industry like a boss.
After this, Fall Out Boy released an album named ‘Infinity on High’ in 2007. This album peaked at #1 position on US Billboard 200 chart and its lead single titled ‘This Ain't a Scene’ also peaked at #1 on the now-defunct Pop 100 chart. Even the second single of ‘Infinity on High’ became a huge hit. Then in 2008, the band’s fifth album ‘Folie à Deux’ came out. This album charted at # 8 on Billboard 200 chart and was certified gold later on.
After a short period of time, Trohman and Hurley along with other musicians, Rob Caggiano, Keith Buckley, Scott Ian, and Josh Newton started the band ‘The Damned Things’ and released their first album ‘Ironiclast’ in 2010. Trohman then started working on a new band with Newton. This band, named ‘With Knives,’ released its debut EP titled ‘Schadenfreude’ in 2012. The following year, Fall Out Boy members collaborated and released their album ‘Save Rock and Roll’. The same year, the band released another EP titled ‘PAX AM Days’. Then in 2015, their sixth album named ‘American Beauty/American Psycho’ came out.
You May Like

Male Guitarists
American Musicians
American Guitarists
Virgo Men
Continue Reading Below
Personal Life
Joe Trohman was born as Joseph Mark Trohman on September 1, 1984 in Hollywood, Florida, USA. He was raised in Ohio and has a brother. Trohman attended New Trier High School in Illinois. In 2011, he got married to Marie Wortman Goble. The couple was blessed with a baby girl, Ruby, three years later. 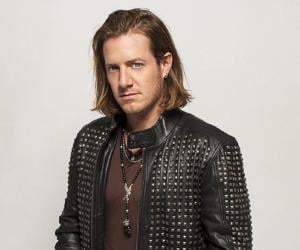