Advanced Search
Joanna Lumley is a British actress and former model who is best known for her starring role in the television drama ‘Absolutely Fabulous’. Throughout her career, she has specialized in playing high-society ladies, and her distinctive voice has reinforced this in an effective manner. Joanna was born in Srinagar, British India, to a military officer who served in the British army’s 6th Gurkha Rifles in World War II. Later the family returned to Britain where she received education from private schools. After schooling, she started her career as a model but her lifelong ambition was to be an actress. Gradually, she appeared in a series of small roles, including the one in the Bond film ‘On Her Majesty’s Secret Service’ (1969) and later enjoyed a stint in the television drama ‘Coronation Street’. She rose to prominence when she was cast as Purdey in the popular British TV show ‘The New Avengers’. Subsequently, with her cult popularity, she landed the role of the female lead in the science-fiction series ‘Sapphire and Steel’. But the most crucial role of her career came in the early 1990s when she played Patsy Stone in the television sitcom‘Absolutely Fabulous’ which earned her several BAFTA Awards. She has made appearances on the big screen in many films including ‘Ella Enchanted’ and ‘The Wolf of Wall Street’, and has also lent her voice to various projects such as ‘The Foxbusters’ British People
Animal Rights Activists
British Women
Taurus Actresses
Women Activists
Childhood & Early Life
Joanna Lamond Lumley was born on May 1, 1946, in Srinagar, Kashmir and Jammu, British India, to Major James Rutherford-Lumley, who served in the 6th Gurkha Rifles, a regiment of the British Indian Army, and his wife, Thya Rose.
After India achieved independence in 1947, her family moved to Kent, England, where she attended Mickledene School as a boarder. Afterwards, she went to St Mary's Convent School in Sussex, and then studied at the Lucie Clayton Finishing School, after being turned down by the Royal Academy of Dramatic Art at the age of 16. 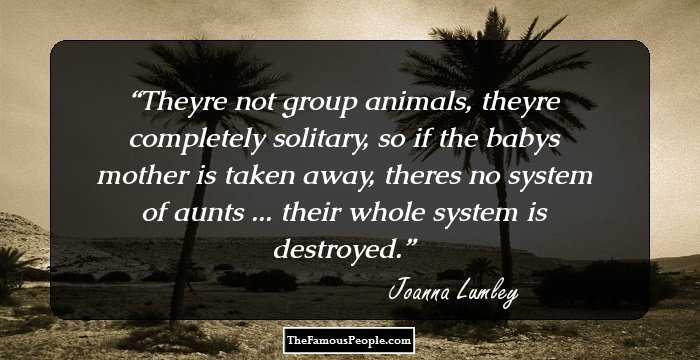 Continue Reading Below
Career
During the first three years of her career, Joanna Lumley worked as a photographic model, notably for Brian Duffy. Alongside, she also worked as a house model for Jean Muir.
In 1966, she appeared in an early episode of the ‘Bruce Forsyth Show’. Three years later, her acting career started with a small role in the movie ‘Some Girls Do’, which was followed by her appearanceas a Bond girl in the 1969 film ‘On Her Majesty's Secret Service’.
In 1973, she starred in a short but memorable role in the television sitcom ‘Coronation Street’. She portrayed the character of Elaine Perkins who turns down Ken Barlow's offer of marriage. The following year, she appeared on the big screen in ‘The Satanic Rites of Dracula’, starring Peter Cushing and Christopher Lee.
In 1976–77, she achieved mainstream stardom when she was roped in for the role of a super-agent in the sitcom ‘The New Avengers’. She charmed as the all-powerful Purdey, a former ballerina-turned-martial arts and weapons expert.
Between 1979 and 1982, she starred in the sci-fi adventure series ‘Sapphire & Steel’ in which she played the role of a mysterious inter-dimensional agent who is not quite human.
During the 1980s, she appeared in several movies such as ‘Trail of the Pink Panther’ (1982), ‘Curse of the Pink Panther’ (1983), and ‘’Shirley’s Valentine (1989).
She then portrayed the role of ‘Patsy Stone’ in the BBC television comedy series ‘Absolutely Fabulous’. The show aired for five seasons (1992, 1994, 1995, 2001, and 2003) and had a number of specials.
In 1995, Joanna Lumley voiced the character of ‘Annie’, the rag doll, in the animated series ‘The Forgotten Toys’.
In 1999, she provided her voice for ‘Sims’, the chicken, in the BAFTA award winning animated series ‘The Foxbusters’.
Continue Reading Below
Throughout the 1990s and 2000s she also worked on numerous film projects including ‘Cold Comfort Farm’ (1995), ‘James and the Giant Peach’ (1996), ‘Parting Shots’ (1999), ‘Maybe Baby’ (2000), ‘Ella Enchanted’ (2004),‘Corpse Bride’ (2005), and ‘The Wolf of Wall Street’ (2013). 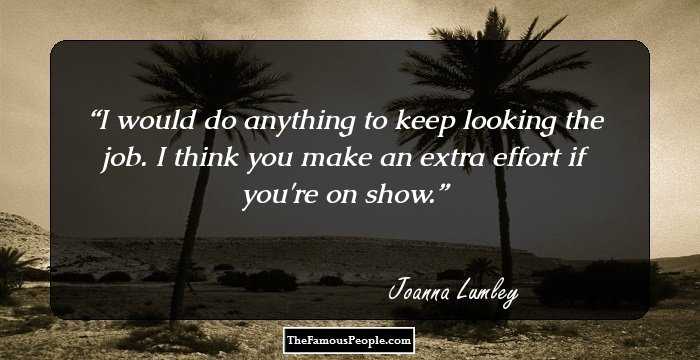 Major Works
In 1992, Joanna Lumley signed the defining role of her career for the TV comedy series ‘Absolutely Famous’. In the role of an aging, sexually aggressive, and frequently drunken fashion director, she delivered a show-stealing performance which earned her several awards.
Awards & Achievements
In 1994, she received an honorary Doctor of Letters (Hon. D.Litt.) from the University of Kent.
In 1995, she won the BAFTA Award in the ‘Best Comedy Performance’ category for her role in the sitcom ‘Absolutely Fabulous’.
In 1995, Joanna Lumley was appointed an Officer of the Order of the British Empire (OBE).
In 2002, she was presented with an honorary degree by the Oxford Brookes University. 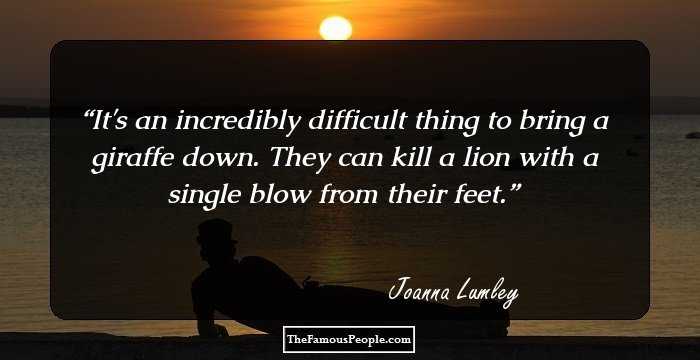 Personal Life & Legacy
Joanna Lumley became an unwed mother in 1967 when she gave birth to her son James. She revealed that the photographer Michael Claydon is the biological father of her son.
In May 1970, she married the comedy writer Jeremy Lloyd. Unfortunately, the marriage was dissolved after a few months, ending in September 1970.
In 1986, she entered into wedlock with conductor Stephen Barlow.
Trivia
She is a leading human rights activist and supporter of many charities such as ‘Suffolk Family Carers’, ‘Kids for Kids’, ‘Mind’, ‘ActionAid’, and ‘SANE’. She is a keen supporter of animal rights charities and also serves as a patron of the Born Free Foundation

Quotes By Joanna Lumley | Quote Of The Day | Top 100 Quotes

See the events in life of Joanna Lumley in Chronological Order