Jigme Dorji Wangchuck was the Third Druk Gyalpo (King) of Bhutan. He was someone who is credited for ushering in a new era in modern Bhutan and is often regarded as the father of modern Bhutan for the progressive changes that he brought about in the country during his reign as the king. He was educated privately, first in the palace and then in Kalimpong, India before he was sent to England in order to finish a well-rounded education as befitting a royal. Upon his return to the country, he served in some capacities in the government before being appointed as the king of the country following his father’s death and throughout his reign as the king that last two decades, he brought in changes that would go on to change the country forever. He established a new constitution, founded the Royal Bhutan Army, established courts, installed judges and did away with serfdoms and slavery. He was also a crafty diplomat who maintained good relationships with his neighbours and helped Bhutan secure a place in the United Nations. 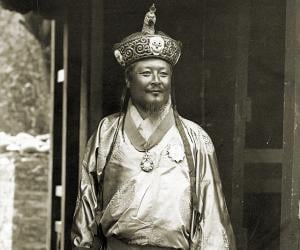 Faisal of Saudi...
Emperors & Kings #757
Historical Personalities #1021
DID WE MISS SOMEONE?
CLICK HERE AND TELL US
WE'LL MAKE SURE
THEY'RE HERE A.S.A.P
Quick Facts

Bhutanese Celebrities
Bhutanese Historical Personalities
Taurus Men
Childhood & Early Life
Jigme Dorji Wangchuck was born to H.H. Maharaja Sri Sir Jigme Wangchuck and his first wife H.M. Puntsho Choden on 2 May 1929, in the Thruepang Palace in Trongsa, Bhutan. His father was the 14th Tongsa Penlop.
He was educated at the Royal Palace and then he went for private education in the city of Kalipmong in India. Subsequently, he went to England to complete his education.
After having travelled the world and gone to several places in Europe to learn more about the ways to develop a modern country, he returned to Bhutan and in 1943, he was made the Tongsa Dronyer. Three years later, he was recognised as the heir apparent to his father.
Continue Reading Below
You May Like

Famous Beautiful Women With Green Eyes
Career
Following the death of the then Paro Penlop named Tshering Penjor, Jigme Dorji Wangchuck was appointed as the Paro Penlop in 1950. It was his first official appointment. The word Penlop signifies the post of a governor of a particular geographical area and he served as the governor of the town of Paro for two years.
His father died on 30 March 1952 and on the 27 October 1952, he was crowned as the new king. His reign ushered in a new era in Bhutan and one of his first tasks was that of establishing the National Assembly which was unicameral in nature. He established the National Assembly a year after becoming the king.
In 1961, he established an economic planning initiative that would plan the course of the economy of Bhutan over a period of five years and two years later he helped in establishing the Royal Advisory Council or Lodoe Tshogde as well as a new constitution. In the same year, he also established the Royal Bhutan Army. He assumed the title of His Majesty the Druk Gyalpo and became the commander in chief of the army.
Jigme Dorji Wangchuck also did a lot for the education sector in Bhutan during his reign. In 1967, he helped in establishing the Simtokha Rigzhung Lobdra that later came to be known as the Institute of Language and Cultural Studies. It became a place for traditional Bhutanese education. He also helped in establishing public schools.
Having already established the Thrimzhung Chenmo or the Supreme Law in Bhutan, nine years earlier, he decided to establish a high court in the country in 1968. In addition to that, judges were appointed in different districts of the country as well. It was under his reign that the judiciary was reorganised and slavery as well as serfdom were made illegal.
He worked tirelessly in his quest to make sure that Bhutan had good relationships with its neighbours and to ultimately become a member of the United Nations. He forged excellent relationships with neighbours India and also recognised the newly created nation Bangladesh. In 1971, Bhutan became the member of the United Nations.
Major Works
Jigme Dorji Wangchuck was without doubt one of the most influential monarchs in the history of Bhutan and is often regarded as the father of modern Bhutan. Among his many achievements, his most impressive was that of making sure that Bhutan became a member of the United Nations and made the country a part of the global diplomatic circle.
Awards & Achievements
He was awarded the Padma Vibhushan, India’s second highest civilian award, in 1954.
Personal Life & Legacy
He married Ashi Kesang Choden Wangchuck, daughter of Gongzim (Lord Chamberlain) Sonam Tobgay, in 1951. The couple had two daughters and a son.
He died on 21 July 1972, in Nairobi, Kenya at the age of 43.
You May Like