Jean Harlow, fondly nicknamed as “The Baby” and the “Blonde Bombshell”, was the forerunner of Marilyn Monroe and Madonna as the sex goddess of Hollywood. She was a trendsetter with her blonde hair and shaved eyebrows replaced with thin, sharp pencil lines. Jean’s real life intention was to remain as a wife and mother but she was pushed to take the acting career because of her ambitious mother who aspired to become a Hollywood actress herself. Her blonde and sensual look and comic talents captivated her fans and this made her do 36 films in just a decade. She was the first actress ever to adorn the cover page of “Life” magazine. She also tried her hand at writing a novel “Today is Tonight,” which was posthumously published by a family friend. She wrote the novel during the period of her salary strike she demanded from MGM, the giant production company under whose label she had risen to stardom. She was exposed to ailments from her childhood. While she was five years old, she had meningitis attack and at the age of 15, she suffered due to scarlet fever. A serious renal failure took her life when she was still at the prime of youth and Hollywood stardom. American Celebrities
Missouri Actresses
Pisces Actresses
American Actresses
Women Film & Theater Personalities
Childhood & Early Life
Harlean Harlow Carpenter was born on March 3, 1911 in Kansas City, Missouri, as the only daughter of Mont Clair Carpenter and Jean Poe Carpenter. Her father was a dentist and her mother came from an affluent family.
She did her schooling at Miss Barstow's Finishing School for Girls in Kansas City. Her parents got divorced during her school days because of her resentful mother.
She sneaked out to meet her father in spite of her mother’s restrictions. She continued her schooling at Hollywood School for Girls when her mother moved to Chicago in search of a Hollywood career.
Unable to get entry to the celluloid world of Hollywood, her mother returned back to Kansas. Jean was affected by scarlet fever while she was at a summer camp in Michigamme, Michigan, but recovered.
She was later put up in Ferry Hall School in Lake Forest, Illinois. Here, she got acquainted to her senior, Charles McGrew. 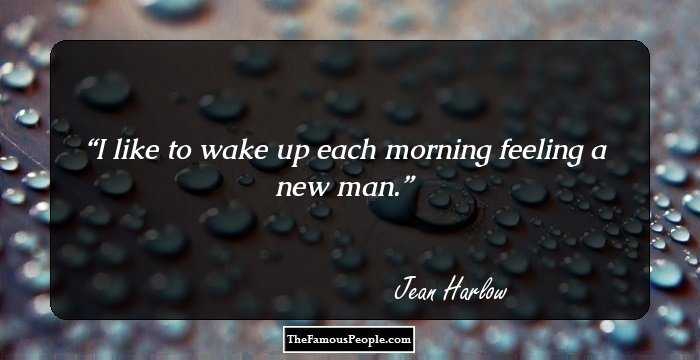 Quotes: Like, I
Continue Reading Below
Career
She was drawn into acting offer while she waited for her friend, an aspiring actress at the Fox Studio. The Fox executives recommended her to Central Casting though she declined their own personal invitation.
On receipt of the personal letter from Central Casting, she accepted the offer under her mother’s compulsion. She entered into contract with Central Casting as Jean Harlow, using her mother’s maiden name.
She made her debut as an extra actress in the film “Honor Bound.” She was signed with an offer for $7 a day.
In 1928, she was offered a minor role in “Moran of Marines.” The next year, she appeared in films like “This Thing Called Love,” “Close Harmony,” “The Love Parade,” and “Double Whoopee.”
The year 1930 marked a breakthrough in her career as she got an offer to act in Howard Hughes' “Hell's Angels.” She was recommended for the film by actor James Hall.
The success of “Hell’s Angels” made her an international star though she failed to receive positive comments from the critics. She appeared as an extra in films like “City Lights,” a Charlie Chaplin film.
Jean gained popularity with her role in “The Secret Six” and “The Public Enemy.”
In 1931, Howard Hughes loaned her contract to MGM and this marked the beginning of her stardom. Her appearance in “Platinum Blonde,” gave her the image of the sex idol of Hollywood.
In 1932 Paul Bern, the MGM executive, became impressed with her and arranged to buy her contract with Hughes. She exceeded the expectation of MGM by her performance in “Red Dust.”
Continue Reading Below
In 1933, she made her appearance in “Dinner at Eight,” the all time star movie of MGM. She enlivened the film with her comic brilliance.
The next film “Bombshell” was a Hollywood parody that resembled her real life experience. She aptly expressed her own personal experience under the control of a greedy stepfather and dominant and persuasive mother.
In 1934, with her role in “The Girl from Missouri,” she broke the coveted image of sex icon. She presented herself as an elegant actress, the usual image of MGM actresses.
She teamed again with Clark Gables and gave hits like “China Seas,” and “Wife vs. Secretary.” She was ranked in the Top Ten list in the poll conducted by the “Motion Picture Herald.”
In 1937, while she was at the shooting of “Saratoga,” she complained of tiredness, stomach ache, and nausea. She was hospitalized but died of uremic poisoning.
Major Works
She gained popularity through “Platinum Blonde” that was released in 1931. The film originally titled, “Gallagher” was later changed to the existing name for publicity. The film won Jean, a top billing.
“Saratoga,” a romantic comedy film directed by Jack Conway was her final film. The film attracted huge crowd and became the box-office hit of 1937.
Awards & Achievements
Nearly 50,000 audiences gathered on the opening day of her first film “Hell’s Angels,” released at the Grauman's Chinese Theatre. The film also has the reputation of applying two-color Technicolor sequence.
She was ranked as the 22nd greatest female movie star by the American Film Institute and the Entertainment Weekly rated her as the 49th “Greatest Movie Star” of all time.
Continue Reading Below
Personal Life & Legacy
When she was 16, she left home and married Charles McGrew, senior to her at the Ferry Hall School. But the marriage lasted only two years and the couple got divorced in 1929.
She got married for the second time with producer Paul Bern in 1932. He was instrumental in winning the contract for Metro-Goldwyn-Mayer, popularly known as MGM but her marriage hardly lasted two months.
She had a brief affair with boxer Max Baer but later switched her liking to Harold Rosson, a cinematographer and married him in 1933. The marriage ended in divorce the next year.
In 1935, she became romantically involved with actor William Powell. She even conceived his child but aborted owing to his objection of having any children and to that of her mother.
She got engaged to William Powell in 1937 with a sapphire ring as their engagement gift.
During the filming of “Saratoga”, she collapsed and was hospitalized but she died of acute uremic poisoning on June 7, 1937.
Trivia
This American actress, hailed as the “Platinum Blonde”, had an affair with Abner "Longy" Zwillman, a notorious mobster. Zwillman’s financial aid to Harry Cohn of Columbia Pictures got her signed for two Columbia pictures.
This Hollywood sex icon was a staunch Democrat who attended the dinner party hosted by President Roosevelt. A video clipping of the event with her words, “Good Evening” is available in You Tube resource.

See the events in life of Jean Harlow in Chronological Order