Jaxon Bieber is the cute younger brother of popular Canadian singer Justin Bieber. Though his career as a popstar is wrought with controversies, Justin Bieber had secured a large fan following with his first single ‘One Time’ which only grew manifold with his most popular track ‘Baby’. The stardom not only altered his teenage life forever, it also affected his family, especially his siblings – Jazmyn and Jaxon, who became instant celebrities. Justin is said to be extremely fond of his younger half-brother, Jaxon Bieber, who is the son of Justin’s father, Jeremy and his second wife, Erin. His sister, Jazmyn, has also enjoyed the constant spotlight ever since Justin became an international sensation. Even though being Justin’s sibling has helped Jaxon achieve fame despite being just a kid, his unmatched cuteness and smart attitude has made him a social media star owing to his own credit. The strong bond the Bieber brothers share is very evident from the way Justin Bieber openly shows his affection for Jaxon by posting sweet pictures of them together. Canadian People
Male Instagram Stars
Male Social Media Stars
Canadian Instagram Influencers
Canadian Social Media Stars
The Meteoric Rise to Stardom
Jaxon Bieber definitely tops the list of adorable kids trending on the social media, with his characteristically Bieber blonde hair and deep, charming eyes. The ardent fans of Justin Bieber, Beliebers (as they are commonly known), are obsessed with his lovable looks and the innocent banter between him and Justin, which they indulge in oh-so-often. When Jaxon was just six years old, he accompanied his older sibling to the 2016 Grammy Awards ceremony and he looked extremely cute and dapper (much to the amusement of the audience) as he walked on the Red Carpet. Jaxon has also been given affectionate nicknames like ‘Little Justin’, ‘Little Bieber’ and ‘Prince’ by the crazy fans and they literally spare no opportunity to show their love for Jaxon.
Recommended Lists:

Scorpio Male
Being exposed to a high-profile lifestyle since he was a toddler, Jaxon is used to all the excessive attention that he is showered with always and he has dealt with it remarkably. He now features amongst other well-known Canadian Social Media personalities and his Twitter and Instagram accounts receive a huge response every time he shares a picture or tweets about his personal life. By the way, Jaxon already has over 1 million followers on Instagram and around 600k followers on Twitter, as unbelievable as it might sound!
Since he belongs to a multi-talented family, he must be blessed with great genes and Beliebers can only hope that he follows his elder brother’s footsteps and mesmerizes the world with his voice. The way he has developed a penchant for fashion and has shown a great sense of style, it is for sure that very soon all the big brands are going to line up to sign up little Bieber for endorsements. His cool and confident attitude sets him apart from other boys of his age and he is setting a new trend for others to follow.

Who Is The Most Popular BTS Member?
Continue Reading Below
Personal Life
Jaxon Bieber was born on 20 November 2009 to Jeremy Bieber and Erin Wagner in Canada. From his social media accounts, we know that Jaxon loves traveling and exploring new places, which shows his adventurous bent of mind. He also loves playing ice hockey just like his elder brother, Justin, and often posts pictures of him participating in the popular Canadian sport. He is a definite sports enthusiast and never misses a good match.
In spite of all the media attention, Jaxon is pretty grounded and likes to lead a normal life at his age. He is a movie buff and watches all the latest releases without fail. Moreover, biking is one of his favourite hobbies and he loves spending time indulging in outdoor sports. His energetic, happy-go-lucky nature makes him even more lovable and his angelic smile can brighten up anyone’s mood. He loves his family and prefers to spend quality time with them, whenever possible. He maintains a great bond with both Justin and Jazmyn, which can be deciphered from the sweet, funny videos they post on social media.
Being a Scorpio, Jaxon is very intense and passionate about everything he is fascinated with, for instance, sports, biking, movies, etc. He also owes his loyalty and dedication towards friends and family, to his zodiac sign. It is no surprise that Jaxon is ambitious and focused on creating his own name in life, and he is very likely to accentuate the level of fame he is receiving now. Even though he is always under the media scanner, he is calm and cool-headed and knows how to enjoy life without worries. 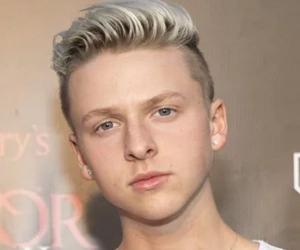