(Actress, Singer and Model Who was One of Hollywood's Leading Sex Symbols in the 1940s and 1950s )

Advanced Search
Very few actors can claim to have the best of both looks and artistic talent and Jane Russell is certainly one amongst them. Blessed with a voluptuous figure, Russell was one of the leading actresses and sex symbols of the mid-20th century. She made the men go weak in their knees with her full-figured body and alluring and fascinating sex appeal. Having an affinity for drama and music, it was her mother who actually coaxed her to take a plunge into the world of acting. Cinema happened accidentally to her as she was spotted by Howard Hughes on a reality show. She went on to star as Hughes leading lady in his film, ‘The Outlaw’. The movie created quite a rage in the film industry due to her bold shots and skin show. Thereafter, she starred in several other movies - from comedy to thriller to drama. Her big break came with ‘Gentlemen Prefer Blondes’, where she co-starred with Marilyn Monroe. The film was followed by a sequel, ‘Gentlemen Marry Brunettes’. Apart from her acting talent, Russell made her mark as a singer by giving voice to her musical aspirations. She sung various singles and also came up with a self-titled album.

American Celebrities
Actresses
American Women
Minnesota Actresses
Gemini Models
Childhood & Early Life
Jane Russell was born as Ernestine Jane Geraldine Russell to Roy William Russell and Geraldine Jacobi. She was the eldest and the only daughter born to the couple who were blessed with four boys.
Her father served as the First Lieutenant in the US Army, while her mother was employed as an actress with a road troupe. Relieved from his duties, the family moved to Southern California where his father started working as an office manager.
Since an early age, she showed keenness for music and drama. She learned how to play the piano and took drama lessons. She also participated in the stage productions at the van Nuys High School.
While at school, she longed to become a designer but gave up on her ambition after the death of her father. Following her graduation, she started working as a receptionist.
Continuing working as a receptionist, she also modelled for photographers. It was her mother who urged her to study drama at the Max Reinhardt's Theatrical Workshop, under Maria Ouspenskaya. 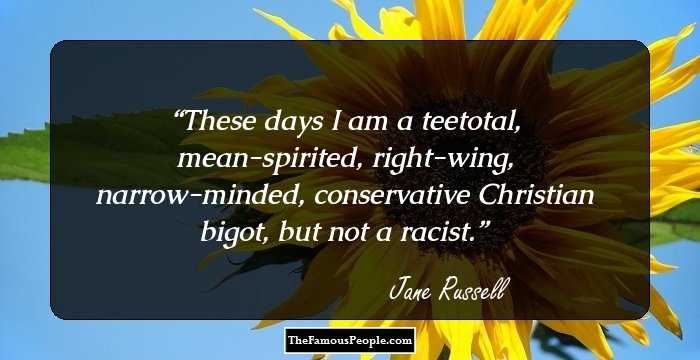 See the events in life of Jane Russell in Chronological Order