DID WE MISS SOMEONE?
CLICK HERE AND TELL US
WE'LL MAKE SURE
THEY'RE HERE A.S.A.P
Popularity Index
00
YouTube Pranksters #115
YouTubers #1167
Quick Facts 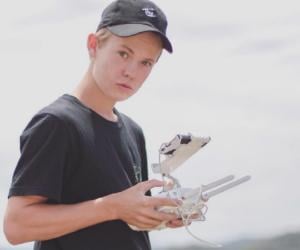 Jack Doherty
James Nguyen is an American YouTuber who is best known for posting prank videos, reaction-based videos, and challenges on his channel tilted James Reacts. His content is extremely amusing and fun to watch. As of now, Nguyen has successfully garnered more than 641k subscribers and about 67 million views on his channel. In addition to YouTube, he has a decent fan base on Instagram and Twitter too. Currently, the prankster has about 19k followers on Instagram. On a personal note, Nguyen is a very humorous guy. He is extremely funny yet straight-forward and speaks what he feels like without bothering about what others think. He loves doing crazy stuff and doesn’t mind enjoying his own company. The American prankster’s aim is to have fun and make people around him laugh. The YouTuber is least concerned about what his haters feel about him. This is the reason he has managed to make a successful online career through his videos. With his amusing and original uploads, Nguyen will surely hit 1 million subscribers very soon. Texas YouTubers
Male Youtubers
Scorpio Youtubers
American YouTubers
Rise to Stardom
James Nguyen along with his three pals launched their channel titled ‘James Reacts’ on YouTube on November 27, 2013. However, his two friends soon bowed out due to personal reasons and Nguyen ultimately became the only one running the channel. Till date, he has posted a lot of interesting content on his channel. His reaction videos are the most popular. In these, the YouTuber reacts to musers like Baby Ariel and Loren Beech. His prank videos, especially the ones that are lyrical, also garner a large number of views.
Recommended Lists:

Male Youtube Pranksters
American YouTube Pranksters
Scorpio Men
Some of the prank-based videos that are incredibly popular are 'Pranking my BULLY with DJ Snake ft. Justin Bieber Let Me Love You Lyrics' and ‘Pranking my Ex Girlfriend with Gnash 'I Hate You, I Love You' Lyrics'. The first video, with over 2.6 million views, features Nguyen pranking his bully with DJ Snake’s 'Let Me Love You' track. The second one, with over 2.1 million views and more than 52k likes, features a lyrical prank played by him.
Nguyen’s reaction videos including 'Best Liddlenique Musical.ly Compilation Reaction', 'Reacting to My Cringy Facebook Pictures', 'Lisa and Lena's Real Voice- Reaction,' and 'Reacting to the WORST Break Up Texts' are super funny and really worth watching. One of his most recent videos titled 'Try Not to Be Satisified Challenge' has garnered over 12k views as of April 2018.

Who Is The Most Popular BTS Member?
Continue Reading Below
Personal Life
James Nguyen was born on November 13, 1999 in Austin, TX, USA. He was raised alongside his older sister. He hasn’t revealed any details regarding his parents, family history, and education. Coming to the YouTuber’s love life, he has been in a few love affairs in the past. However, his current relationship status is unknown. He has uploaded many selfies on his Instagram account.