Robert James Rallison is an American webcomic artist and "YouTuber." He is best known for his webcomic character 'TheOdd1sOut,' which he uses in his web stories. He uses the name of the webcomic character as one of his online pseudonyms. Most of Robert’s webcomics revolve around his childhood experiences. He began his social-media career by posting his creations on 'Tumblr' and later moved to 'iFunny,' 'YouTube,' 'Tapas,' and other platforms. Some of Robert’s most popular webcomics are ' Work Stories (sooubway),' 'My Thoughts on ASMR,' and 'My Thoughts on Sports.' His 'YouTube' channel has over seven million subscribers. Robert has now launched his second 'YouTube' channel, which is already on its way to become as popular as his first channel. Robert owns a website and has authored a book, too. American People
Arizona YouTubers
Tall Celebrities
Tall Male Celebrities
Male Youtubers
Career
Robert has been passionate about drawing cartoon characters since he was in school. By the time he reached high school, he began creating customized cartoons for his friends. With time, his hobby turned into a serious passion, and Robert decided to pursue it as a career. He embarked his career with 'Tumblr' as a webcomic artist. He created a white, round-faced character with an ecstatic expression, known as 'TheOdd1sOut.' It resembled a marshmallow. The character is the protagonist of all of Robert’s webcomics, and its name later became his online pseudonym. His debut year was spent mostly in sketching an interesting character until he finalized the look of 'TheOdd1sOut'. Toward the beginning of 2014, Robert began posting his webcomics on the webcomic platform 'Tapas' (formerly known as ‘Tapastic’). A few months later, he created a 'YouTube' channel named after the webcomic character. The very first video posted on the channel, 'A Book I Made as a Kid,' crossed five million views. The videos on the channel feature Robert’s life experiences in the form of webcomics. He created a video segment, ‘Sooubway,’ which chronicled his experiences of working at ‘Subway.’ Interestingly, Robert’s earnings through the “views” of this video segment were a lot more than his annual earnings at ‘Subway.’ His videos are also featured on the popular food-and-drink blog 'Foodbeast.' In 2017, Robert reached the three-million-subscriber mark and celebrated it by stifling himself in three million sprinkles, one sprinkle per subscriber. By the end of 2017, he had earned over five million subscribers. Soon, Robert earned a spot on the list of ‘5 Indie YouTube Animators Poised for Mainstream Success,’ created by popular cartoonist Dave Trumbore. However, Robert has now shifted his focus to 'YouTube' videos and creates fewer webcomics.
Recommended Lists:

Taurus Youtubers
American YouTubers
Male Comedy Youtubers
American Comedy YouTubers
Unlike other “YouTubers,” Robert does not greet his viewers at the beginning of his videos. He begins the story without wasting time. He uses 'PaintTool SAI' for drawing the webcomic characters and 'Adobe Premiere' for editing them. Robert edits the audio using the application 'Audacity.'
Recommended Lists:

Taurus Men
In 2017, Robert voiced his webcomic character for the video short 'Imaginary Friend.' The following year, he appeared as ‘Martha’ in the comedy TV series 'How It Should Have Ended.'
Toward the end of 2017, Robert created his second 'YouTube' channel, 'TheOdd2sOut.' The first video, however, was uploaded a few months later. The video, titled ‘Welcome To My Channel!/100k Special/Goodbye to this Channel/Were Back!,’ has earned over a million views now. The channel itself has accumulated a million subscribers.
Robert also posts regularly on 'Instagram' and 'Twitter' but is relatively less popular on those platforms. His 'Twitter' account has a little over 580 thousand followers, while his 'Instagram' account has over 61 thousand followers. Robert owns a website, too, through which he promotes his work. He has also authored a book titled ‘The Odd 1s Out: How to Be Cool and Other Things I Definitely Learned from Growing Up.’ The book narrates Robert’s adventurous experiences while growing up.

Who Is The Most Popular BTS Member?
Continue Reading Below
Personal Life
Robert was born on May 14, 1996, in Arizona, US. He grew up with his twin sister, Faith; his older brother, Luke; his older sister; and his younger sister.
Robert owns two dogs named Georgie and Poppy. The former was named after George W Bush, the 43rd president of the US, as the dog was born on the day of the 2004 US presidential election. Robert had a lot of hamsters when he was young. His favorite sport is badminton. Dark blue is his favorite color. 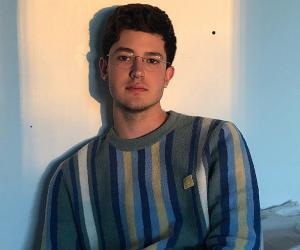