Advanced Search
James Marsden is an American actor, singer, and model. Marsden initially wanted to become a broadcast journalist. In fact, he even enrolled to study broadcast journalism, but then later realized that he wanted to become an actor. He has appeared in many cult classic television series, such as ‘Ally McBeal’ and ‘30 Rock.’ However, as far as Marsden was concerned, television was only a stepping stone towards a career in movies. Throughout his career, he has delivered excellent performances in well-known movies like ‘X-Men,’ ‘The Notebook,’ and ‘Enchanted.’ His performances have made him a force to be reckoned with in the highly competitive world of Hollywood. On the other hand, his skills as a singer had gone completely unnoticed until he recorded two best-selling songs for a movie. Apart from recording two songs, he also landed an acting role in the film. Since then, he has gone on to cement his place as an actor and singer in the American film industry. James Marsden is one of the most talented individuals in Hollywood. It is certain that his body of work would be appreciated by fans for years to come. American People
Oklahoma Actors
Virgo Actors
American Actors
Actors Who Are In Their 40s
Childhood & Early Life
James Paul Marsden was born on 18 September 1973, in Stillwater, Oklahoma, USA, to James Luther Marsden and Kathleen Marsden. His father was a professor at the ‘Kansas State University,’ while his mother was a nutritionist. One of the five children born to his parents, Marsden has two sisters and two brothers.
John Marsden attended ‘Hefner Middle School’ and later transferred to ‘Putnam City High School,’ located in Oklahoma City. Although his parents divorced when he was nine years old, it did not affect his academic accomplishments.
After graduating from high school, John Marsden decided to enroll at the ‘Oklahoma State University’ to study broadcast journalism. However, he dropped out of the university in an attempt to realize his dream of becoming an actor. Subsequently, he moved to Los Angeles. 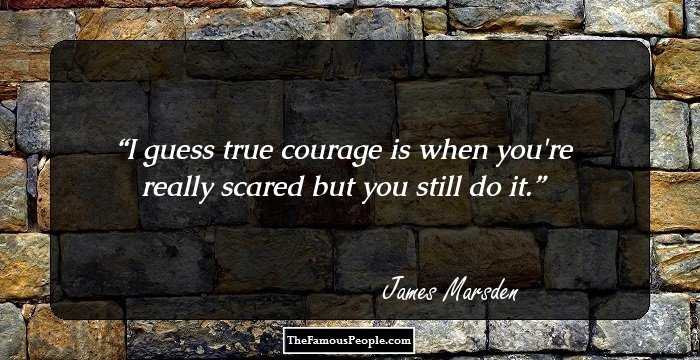 Quotes: You, I
Continue Reading Below
Career
James Marsden received his first break when he appeared in the American TV sitcom ‘The Nanny.’ However, his first big break came in the form of a Canadian show titled ‘Boogies Diner.’ Although the show did not last beyond a season, Marsden got noticed for his acting skills. Later on, he appeared in TV series like ‘Saved by the Bell,’ ‘Party of Five,’ ‘Second Noah,’ ‘Disturbing Behavior,’ and ‘Ally McBeal.’
Although James Marsden had become a known face on television, he found it difficult to step into the world of films. However, it all changed in 2000 when he appeared as ‘Cyclops’ in the film ‘X-Men.’ He went on to reprise his role as ‘Cyclops’ in the film’s sequels, ‘X2’ and ‘X-Men: The Last Stand.’
Another landmark film in James Marsden’s career was the 2004 film ‘The Notebook.’ In the film, he played the role of one of the love interests of the female protagonist, played by Rachel McAdams. The film was a worldwide success.
In 2007, James Marsden was cast in the musical ‘Hairspray.’ Apart from his acting skills, the movie also showcased his remarkable talent as a singer. He sang the title song ‘Hairspray’ and ‘The Nicest Kids in Town,’ and both the songs went on to become smash hits. In the same year, he appeared alongside Amy Adams in the Disney blockbuster ‘Enchanted.’ The following year, he was cast as the male lead opposite Katherine Heigl in the film ‘27 Dresses.’
In 2009, James Marsden was cast in the lead role in the film ‘The Box’ alongside Cameron Diaz. The film turned out to be a moderate success. The very next year, he became a member of the ensemble cast in the American remake of the classic British comedy ‘Death at a Funeral.’ In 2011, he starred in the commercially successful movie ‘Hop’ alongside Russell Brand.
In 2013, James Marsden appeared alongside actors like Denzel Washington and Mark Wahlberg in ‘2 Guns.’ In the same year, he also starred in the film ‘The Butler.’ During this time, he played a recurring role in the highly popular TV series ‘30 Rock.’
In 2014, he was seen as the lead in the movie ‘The Best of Me,’ opposite Michelle Monaghan. In 2016, Marsden started to appear as the sentient android ‘Teddy Flood’ in the ‘HBO’ series ‘Westworld.’ In 2018, he was cast to play ‘Tom Wachowski,’ a former ‘SFPD’ officer, in an adventure film titled ‘Sonic the Hedgehog.’ In 2019, he portrayed the role of an attorney named ‘Steve Wood’ in the ‘Netflix’ black comedy series ‘Dead to Me.’
Major Works
Among his movies, ‘Enchanted,’ where he appeared alongside Amy Adams, is one of his most famous and important projects, not only due to the fact that the film was a blockbuster hit but also because of the fact that Marsden was able to reach his full potential as an actor in the film.
Personal Life & Legacy
James Marsden got married to Mary Elizabeth Linde in 2000. The couple has two children; a son named Jack Holden and a daughter named Mary James. Marsden and Elizabeth Linde got divorced in 2011.
James Marsden has also had a relationship with Rose Costa, and the couple has a son named William Luca Costa-Marsden.
In 2015, Marsden started dating a British musician and actor named Edei, alias Emma Deigman.

See the events in life of James Marsden in Chronological Order