Jim Cramer is a finance expert and the host of the finance television program ‘Mad Money’ that is broadcast on CNBC. A former hedge fund manager, he began his career as a journalist and covered a series of high-profile murders in Florida. Finding it hard to make a living through reporting, he went to Harvard to study law. It was during this stint at Harvard that his interest in finance began to develop and he started trading in the stock market. After getting his degree he briefly pursued a career in law but quit to enter the world of finance. After working with Goldman Sachs for a few years he founded his own hedge fund company Cramer & Co. In collaboration with the editor of ‘The New Republic’, Martin Peretz, he co-founded TheStreet.com, Inc. in which he serves as a market commentator and adviser. In 2005 he was invited to host a finance program, ‘Mad Money’ on the CNBC channel. The program focuses on investment and speculation in publicly traded stocks where Cramer recommends one or more stocks based on certain rationale. He has also appeared on other television shows like ‘NBC Nightly News’, ‘The Daily Show with Jon Stewart’, and ‘The Tonight Show with Jay Leno’. In addition he is also the author of several books on finance. Mark Wahlberg
DID WE MISS SOMEONE?
CLICK HERE AND TELL US
WE'LL MAKE SURE
THEY'RE HERE A.S.A.P
Quick Facts 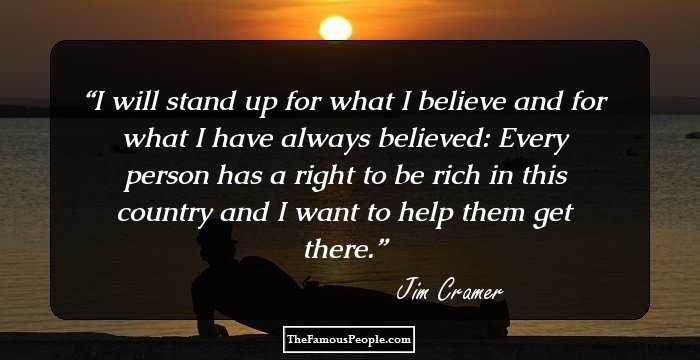 Quotes: Believe
Continue Reading Below
Career
He worked at a number of entry-level reporting jobs after leaving college. While working for the ‘Tallahassee Democrat’, he covered high-profile serial murder stories—the Ted Bundy killings—for which he received considerable attention.
He also worked briefly for the ‘Los Angeles Herald-Examiner’ and was one of the first reporters at ‘American Lawyer.
He went to Harvard Law School to pursue a degree in law. There he worked alongside with Alan Dershowitz as a research assistant. He graduated in 1984.
During his stint at Law College he became interested in finance and started trading in stocks. With his knowledge of the stock market he helped Martin Peretz, the owner of ‘The New Republic’ earn a huge profit on his stock investments.
After working briefly at a law firm, he was offered a job as a stockbroker in what was then the Securities Sales Department of Goldman Sachs. He held the position for three years.
He quit Goldman Sachs in 1987 to found his own hedge fund company, Cramer & Co. Some of the earliest investors included his friends Eliot Spitzer and Martin Peretz.
Along with Martin Peretz he co-founded TheStreet.com, Inc. in 1996. The website provides financial news and services. Over the years it has grown to include sister websites like MainStreet.com, Stockpickr, and Bankingmyway.com.
He retired from Cramer & Co. in 2001 after 14 years of successful business. The company was then taken over by his former partner Berkowitz and renamed as Cramer, Berkowitz & Co.
In 2005, CNBC appointed him to host ‘Mad Money’, a television program that focuses on financial investments and speculations in publicly traded stocks. The program attempts to entertain as well as educate investors about the stock market.
Continue Reading Below
He hosted a radio show, ‘Jim Cramer’s Real Money’ that was similar to his television show ‘Mad Money’. The show ran till 2006.
He appeared on an interview with Dan Rather on ’60 Minutes’ in November 2005 in which he discussed the professional as well as the personal aspects of his life. Footage of his wife and daughters were also included in the interview.
He has also authored several books on finance including ‘Jim Cramer’s Getting Back to Even’ and ‘Jim Cramer’s Mad Money: Watch TV, Get Rich’.
He has made guest appearances in several television shows like ‘NBC’s Today’, ‘Cheap Seats’, ‘The Tonight Show with Jay Leno’ and ‘Jimmy Kimmel Live!’ 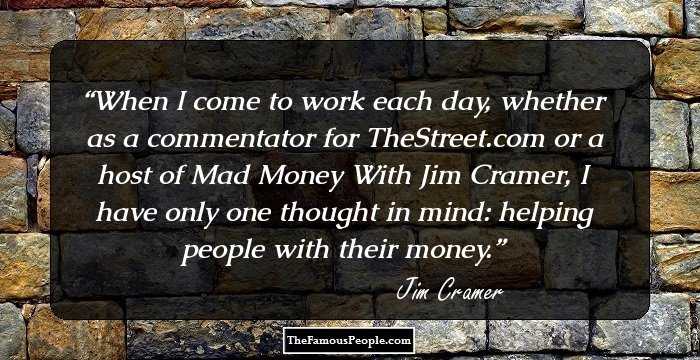 Quotes: Money
Major Works
TheStreet.com, Inc. the website he co-founded with Martin Peretz, is one of his biggest achievements. The website initially published financial news and services though later on the company grew to encompass subscription investor services, banking services, mobile applications and also a charitable trust portfolio.
He is famous as the host of the show ‘Mad Money’ which he has been presenting since 2005. He provides stock picks and investing advice on the show and also takes calls from viewers regarding the stocks.
Personal Life & Legacy
He met Karen Backfisch, a trader working with Michael Steinhardt’s hedge fund, and married her. They had two daughters and divorced in 2009.
He has often been accused of market manipulation and fraud. He also received negative publicity for his comments on President Obama’s spending plans. 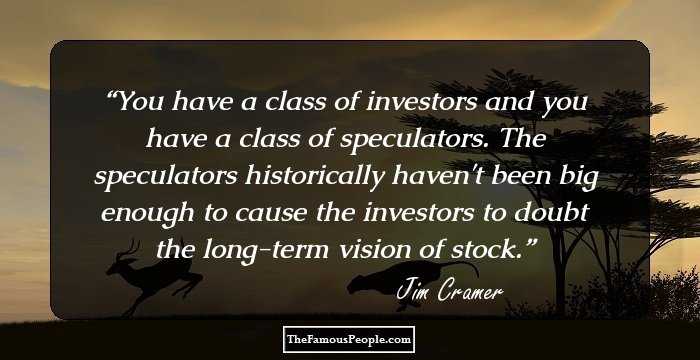 Trivia
He was admitted to the New York bar in 1985 though he was later suspended.
He made a cameo appearance in the 2008 movie ‘Iron Man’.
Recommended Lists:
Writers #885
Media Personalities #596

See the events in life of Jim Cramer in Chronological Order