(Known for His Role Dr. Gregory House on the TV series ‘House’)

Advanced Search
James Hugh Calum Laurie is an English actor, comedian, vocal artist, musician, and author. As an actor alone, James has many prestigious awards under his belt, including the ‘Golden Globe Award.’ He was first noticed for his performance in ‘A Bit of Fry and Laurie.’ He is also known for his breakout performance in the third and fourth season of the TV series ‘Blackadder.’ His most famous role to date is ‘Dr. Gregory House’ in the Fox TV medical drama series ‘House, M.D.’ Laurie has also appeared in several movies, including ‘101 Dalmatians,’ ‘Stuart Little,’ ‘Street Kings,’ ‘Sense and Sensibility,’ and ‘The Man in the Iron Mask.’ In recent years, he was seen playing important roles in series like ‘The Night Manager’ and ‘Veep.’ He also portrayed ‘Dr. Eldon Chance’ in the crime drama series ‘Chance.’ Besides being an actor, he is also a bestselling author known for his novel ‘The Gun Seller.’ Laurie has also released two music albums, namely ‘Let Them Talk’ and ‘Didn’t It Rain.’ He also plays instruments like the piano, saxophone, guitar, drums, and harmonica. British People
Directors
Stand-up Comedians
British Men
Eton College
Childhood & Early Life
James Hugh Laurie was born on June 11, 1959, in Oxford, Oxfordshire, England, to parents of Scottish descent. His father William George Ranald Mundell "Ran" Laurie was a doctor and an Olympic gold medal winner in rowing at the 1984 ‘London Games.’ James had a strained relationship with his mother Patricia Laidlaw. He has two older sisters, Susan and Janet, and an older brother, Charles Alexander Lyon Mundell Laurie.
His parents attended ‘St. Columba's Presbyterian Church of England’ and the Presbyterian upbringing would have a lasting impact on Laurie’s life. He has always said that he doesn’t know how to handle pleasure and what exactly to do with it after having earned it. He lost his mother to motor neurone disease in 1989.
Laurie attended the ‘Dragon School’ in Oxford until the age of 13. He would later admit that he was not a good student. He then went to study at ‘Eton College’ in Windsor. He also attended the ‘Selwyn College’ under the ‘University of Cambridge,’ as his father had also attended the same college.
He wanted to be like his father and studied archaeology and social anthropology. Laurie won the ‘British National Title’ in 1977 in junior coxed pair rowing and went on to represent Great Britain at the 1977 ‘Junior World Rowing Championships.’ He was part of the ‘Eton Vikings’ rowing club and won the ‘Blue Award’ in 1980 at the ‘Oxford’ and ‘Cambridge Boat Race.’ 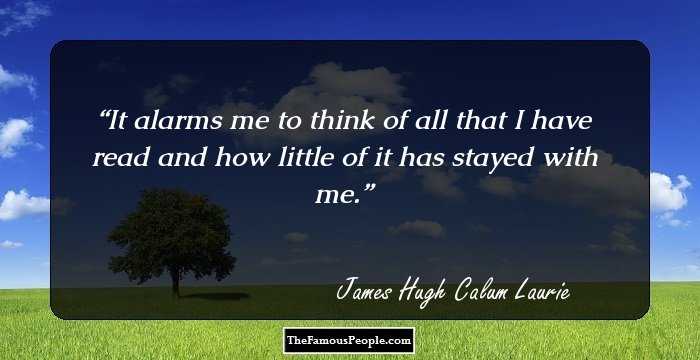 Quotes: Me, Think
Continue Reading Below
Career
Hugh Laurie came under the limelight after being part of the comedy series ‘A Bit of Fry & Laurie.’ He acted alongside another British actor Stephen Fry. The series, aired from 1989 to 1995, served as a launch pad for both the actors.
In 1982, he played several minor roles in the TV series ‘There’s Nothing to Worry About!’ From 1983 to 1984, Laurie was seen in various series and TV films like ‘The Crystal Cube,’ ‘Keep Off the Grass,’ and ‘The Young Ones.’ Around the same time, the actor was also seen playing several roles in the TV series ‘Alfresco.’
While he played a minor role in the TV show ‘Happy Families’ in 1985, it was the BBC series ‘Blackadder II’ that made him a household name. Laurie’s performance in ‘Blackadder II’ made him a regular in the third season of the series in 1987. In ‘Blackadder the Third,’ he played the prominent role of ‘George, Prince of Wales.’
In 1987, Laurie acted in the TV movie ‘Up Line’ and played the role of ‘Prince George’ in the 1988 TV short ‘Blackadder’s Christmas Carol.’ He also had a role as ‘Mr. Mott’ in the TV series ‘Les Girls.’ The next year, he was seen in the romantic drama movie ‘Strapless.’
1989 saw the British actor return to the fourth installment of the BBC series ‘Blackadder’ and this time around the show was titled ‘Blackadder Goes Forth.’ The series was a huge hit and starred actors like Stephen Fry and Rowan Atkinson. Laurie portrayed the role of ‘Lt. the Honourable George Colhurst St. Barleigh’ in the following episodes: ‘Captain Cook,’ ‘Corporal Punishment,’ ‘Major Star,’ ‘Private Plane,’ ‘General Hospital,’ and ‘Goodbyeee.’
From 1990 to 1993, Laurie acted in the TV adaptation of P.G. Wodehouse’s ‘Jeeves and Wooster.’ He played the role of ‘Bertie Wooster’ from the pilot to the series finale titled ‘In Court after the Boat Race’ and ‘The Ex's Are Nearly Married Off’ respectively.
In 1993, the actor voiced the character ‘Squire Trelawney’ in the TV miniseries ‘The Legends of Treasure Island.’ In the same year, he also portrayed the lead role of ‘Leo Hopkins’ in ‘All or Nothing at All.’
In 1995, Laurie portrayed the character of ‘Sir Michael Jaffa’ in the TV series ‘Look at the State We’re In!’ The same year, his performance in the Ang Lee directed ‘Sense and Sensibility’ was praised by the critics.
From 1996 to 1998, the actor played several roles in movies like ‘The Man in the Iron Mask’ and in TV shows like ‘Tracey Takes On…,’ ‘Friends,’ ‘Murder Most Horrid,’ and ‘Spice World.’ His first major commercial hit in America came in the form of ‘101 Dalmatians.’ The movie, which was made at a budget of US $75 million, collected US $320.7 million.
Continue Reading Below
In 1999, he portrayed the role of ‘Mr. Little’ in the hit movie ‘Stuart Little.’ He then reprised the role in the 2002 sequel. He also played ‘Viscount George Bufton-Tufton’ in the sci-fi comedy film ‘Blackadder: Back & Forth.’
Hugh then played many minor roles from 2000 to 2003. During this period, he was seen in series, such as ‘Randall and Hopkirk,’ ‘Dragans of New York,’ and ‘Spooks.’ He also voiced a character in the ‘Family Guy’ episode of ‘One If by Clam, Two If by Sea.’
2003 saw the actor portray the role of ‘Paul Slippery’ in ‘Fortysomething.’ It was his depiction of the narcissistic, genius, and cynical doctor in ‘House, M.D.’ that made him a star in America. He went on to portray the role of ‘Dr. Gregory House’ from 2004 to 2012.
Laurie then played a prominent role in the action-adventure-fantasy movie ‘Tomorrowland’ which also starred George Clooney. His portrayal of ‘Richard Roper,’ a villainous and corrupt English billionaire, in the British spy thriller ‘The Night Manager’ earned him critical applause from all over the world.
From 2016 to 2017, Hugh Laurie played the lead role of ‘Doctor Eldon Chance’ in the series ‘Chance.’ He also played ‘Senator Tom James’ in the ‘Emmy’ award-winning political satire ‘Veep’ (2015-2019). He was also cast as ‘Mycroft Holmes’ in the 2018 American action-comedy ‘Holmes and Watson.’
In 2019, he appeared in the comedy drama ‘The Personal History of David Copperfield’ which was based on Charles Dickens’ novel ‘David Copperfield.’ In 2020, he was seen playing ‘Ryan Clark’ in the science fiction comedy television series ‘Avenue 5.’
Throughout his career, the actor has voiced characters for projects, such as ‘Preston Pig,’ ‘Stuart Little: The Animated Series,’ ‘Monsters vs. Aliens,’ ‘Arthur Christmas,’ ‘The Simpsons,’ etc.
He is also an accomplished musician and has released two albums. The first album ‘Let Them Talk’ released on April 18, 2011. His second album ‘Didn’t It Rain’ released on May 6, 2013 and features blues, jazz, and other musical genres. 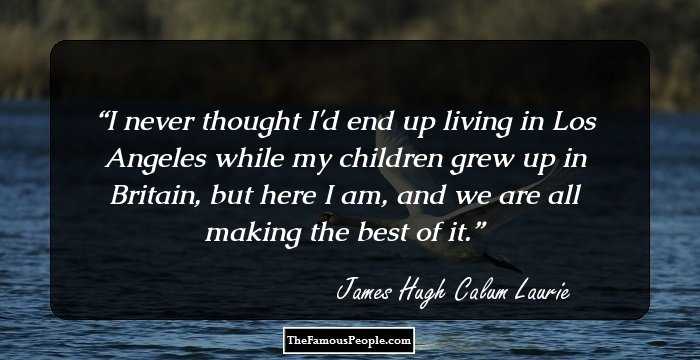 Quotes: Children
Continue Reading Below
Recognition
Laurie is famous for portraying the iconic role of ‘Dr. Gregory House’ in ‘House, M.D.’ for which he received nominations at ‘Emmy Awards.’ ‘Guinness World Records’ named him the most watched actor in 2011. He was also one of the highest paid actors, receiving up to US $409,000 for each episode.
Awards & Achievements
At the ‘Primetime Emmy Award,’ he was nominated six times from 2005 to 2011 under the ‘Outstanding Lead Actor in a Drama Series’ category for his role in ‘House, M.D.’ In 2016, he was nominated for ‘Outstanding Supporting Actor in a Limited Series or Movie’ for ‘The Night Manager.’ In 2017, he was nominated for ‘Veep’ under the ‘Outstanding Guest Actor in a Comedy Series’ category.
Hugh Laurie won the ‘Best Actor – Television Series Drama’ award at the ‘Golden Globe Awards’ in 2006 and 2007 for ‘House, M.D.’ He also won ‘Best Supporting Actor – Series, Miniseries or Television Film’ in 2017 for ‘The Night Manager.’
For his performance in ‘House, M.D.,’ he has won best actor awards at ‘Screen Actors Guild Awards,’ ‘Satellite Awards,’ ‘Television Critics Association Awards,’ ‘Teen Choice Awards,’ and ‘People's Choice Awards.’
He was also named the 2011 ‘GQ Music Man of the Year.’ 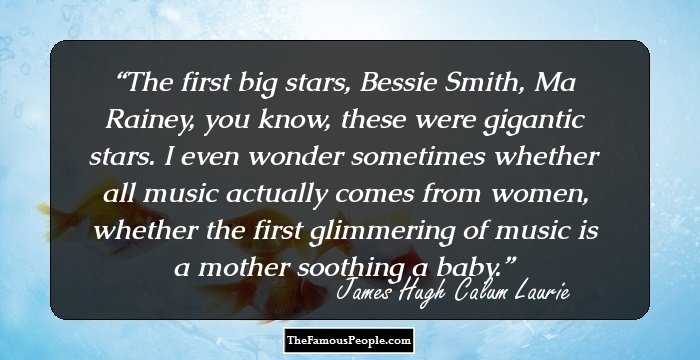 Quotes: You, Women, Music
Personal Life
Hugh got married to theatre personality Jo Green on June 16, 1989, and has three children. His sons, Charles and William, were born in 1988 and 1991 respectively. His daughter Rebecca was born in 1993.
Hugh Laurie was awarded the OBE or the Officer of the Order of the British Empire in 2007 for services to drama.
The actor suffers from severe clinical depression and has been in therapy for years.
Trivia
Hugh Laurie received a star of his own on the ‘Hollywood Walk of Fame’ on October 25, 2016.

6. The Personal History of David Copperfield (2020)

Quotes By Hugh Laurie | Quote Of The Day | Top 100 Quotes

See the events in life of Hugh Laurie in Chronological Order