Jack Duff is a music artist from Ireland who is better known as half of the singing duo 'Jack and Cormac.' Jack was one of the semifinalists on the talent reality show 'Britain's Got Talent' (BGT). He joined the show along with singer and guitarist Cormac Connell, and after the show ended, they formed a duo. As a duo, Jack and Cormac have created cover versions of the works of several popular artists. Jack joined the boy band 'RoadTrip' after parting ways with Cormac. Jack has performed at many live shows with ‘RoadTrip.’ He also appeared in a brief role in a short film released in 2015. Elvis Presley
Pop Singers #2061
Singers #9084
DID WE MISS SOMEONE?
CLICK HERE AND TELL US
WE'LL MAKE SURE
THEY'RE HERE A.S.A.P
Quick Facts

Irish People
Male Singers
Cancer Singers
Irish Singers
Male Pop Singers
Career
Jack began his career as a singer at the beginning of 2011. He uploaded a cover version of the track 'Grenade' by Bruno Mars on 'YouTube,' which caught the attention of many high-profile personalities. Impressed by his voice, famous American blogger, columnist, and TV personality Perez Hilton approached Jack. Hector Ó hEochagáin, an Irish TV and radio presenter, published an article on Jack. Irish radio station 'LMFM' and former national newspaper of the UK, 'News of the World,' too, publicized the young talent. Jack was also part of a professional recording under 'The Frank Kearns Rockschool' at 'SALT' recording studio, Dublin. By the age of 11, Jack had already begun to upload cover versions of popular songs on his social-media pages.
Jack received worldwide exposure after he participated in the seventh season of the talent competition series ‘BGT’ in 2013. Jack met singer and guitarist Cormac Connell at 'St. Patrick’s Classical School' in Navan, Ireland. The two had participated in a school talent show before auditioning for ‘BGT’ in 2013. In the audition, they performed the 'Of Monsters and Men’ song 'Little Talks.' The duo’s performance was highly appreciated by the judges, and they qualified for the next set of rounds. Furthermore, the video of their audition became viral on 'YouTube.' Currently, their audition video on ‘BGT’s official ‘YouTube’ channel has more than nine million views. Jack and Cormac performed the cover version of the hit track ‘I Knew You Were Trouble’ by Taylor Swift in the semifinal round and made their place among the top three contestants on the show. Jack and Cormac competed with comedian Jack Carroll and singer-songwriter Gabz in the semifinals. Unfortunately, Jack and Cormac could not win the competition but garnered immense appreciation for their performances.
Following the show, Jack and Cormac began performing as a duo. They posted their performances on their social-media pages and built an impressive fan base. The duo became active on social-media channels such as 'Twitter,' 'Instagram,' and 'Facebook,' through which they kept their fans updated about their upcoming releases and shows. They also had a website that published everything about the duo and offered signature merchandize for their fans. However, Jack and Cormac parted ways a few years later, to pursue their individual music projects.
In 2016, Jack joined the five-member boy band 'RoadTrip.' He joined the band as a trialist and later became a permanent member. The band is managed by Blair Dreelan, former lead singer of the 1990s boy band ‘East 17' and manager of several world-renowned music artists such as Loren Gray, HRVY, Zach Clayton, Union J, Bars, and Melody. Working with such an influential personality proved beneficial for Jack’s music career. He received remarkable international exposure and widened his horizon in terms of his performance.
As part of ‘RoadTrip,’ Jack has performed cover versions of hit tracks by singers such as Ed Sheeran and Justin Bieber. In addition, Jack has also released many original tracks with the band. He has also performed in concerts and has been featured in 'RoadTrip' vlogs and music videos. His performances with the band are available on the band’s 'YouTube' channel.
Before joining 'RoadTrip,' Jack appeared in the 2015 action short 'Demon Within.'
You May Like

Famous Beautiful Women With Green Eyes
Personal Life
Jack was born Jack Richard Daniel Duff, on July 6, 1999. He has a sister named Emily. Jack is originally from Meath, Ireland. He currently lives in Slough, London. Jack shares a flat with his bandmates and singer HRVY (Harvey Cantwell). HRVY and Jack’s band share the same manager.
Jack has posted a few photos of his girlfriend on his 'Instagram' page. However, he has never revealed anything about her.
Jack can play multiple instruments, such as the ukulele, the guitar, and the cajón. Jack has been influenced by the music of Ed Sheeran, Christina Perri, Jessie J, ‘McFly,’ and Jason Mraz. His band has a cat called Pepper.

See the events in life of Jack Duff in Chronological Order 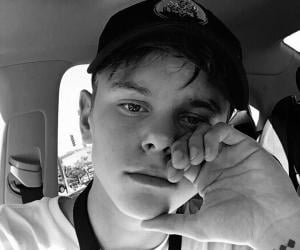