Advanced Search
Inger Stevens was a Swedish-American stage, film and television actress best known for her role of Katy Holstrum in the American situation comedy television series ‘The Farmer's Daughter’. This classy yesteryear beauty had to struggle all through her life with relationships starting from her troubled childhood after her mother abandoned the family to falling and failing in love with her co-stars that often left her depressed. She ran away from home at 16 and started working in burlesque shows only to be brought back by her father. She later worked as a chorus girl and took classes at the Actors Studio and began appearing in commercials, plays and TV series before landing with her breakthrough role with the Bing Crosby starrer film ‘Man on Fire’. She moved on with several other film and television appearances but became a household name with the TV series ‘The Farmer's Daughter’. Success of the series that ran for three seasons paved way for several notable films. These include some of her brilliant performances in films like ‘A Guide for the Married Man’, ‘Madigan’, ‘5 Card Stud’ and ‘A Dream of Kings’ among others. Untimely death of this somewhat mystery lady was attributed to "acute barbiturate poisoning". American Celebrities
Swedish Celebrities
Swedish Women
Libra Actresses
Swedish Actresses
American Actresses
Childhood & Early Life
Inger was born on October 18, 1934, in Stockholm, Sweden to Per Gustaf and Lisbet Stensland as their eldest child.
Inger often remained ill as a kid and faced a troubled childhood. When she was nine, her mother left the family for another man and her father relocated to the US leaving behind the two daughters in the care of the family maid.
The two girls were thereafter kept in the custody of an aunt in Lidingö before Inger’s father, who started teaching at Columbia University and remarried by that time, relocated the two girls to New York City in 1944.
When she was 13, Inger shifted to Manhattan, Kansas, with her father and started attending Manhattan High School. When she was 16, she ran away from home. She went to Kansas City, Missouri, where she began working in burlesque show, but her father located her and brought her back home.
After attaining 18 years of age she started performing as a chorus girl, worked in the Garment District located in the borough of Manhattan in New York City and also attended classes at the Actors Studio.
Continue Reading Below
Career
She began her showbiz career with TV series, commercials and plays. Some of her initial TV series appearances includes in ‘Kraft Television Theatre’ (1954, 1 episode), ‘Robert Montgomery Presents’ (1955, 1 episode), ‘Studio One’ (1954–1955, 3 episodes) and ‘Matinee Theatre’ (1956, 1 episode) among others.
Her breakthrough came in 1957 with her debut film ‘Man on Fire’ where she essayed the starring role of Nina Wylie opposite famous yesteryear American singer and actor Bing Crosby. Although the film failed to make a mark at the box-office, it fetched her attention as an actress.
She played the starring role of Joan Molner in the thriller film ‘Cry Terror!’ that also had James Mason and Rod Steiger in lead roles. The film released on May 2, 1958, and went on to become a commercial success. That year she also featured in the pirate film ‘The Buccaneer’ that, however, fared poorly at the box-office.
This stunning and elegant beauty garnered a nomination at the 1958 Laurel Awards in the category of ‘Top New Female Personality’.
While continuing with her big-screen endeavours, she made several TV appearances in series like ‘Alfred Hitchcock Presents’ (1957, 1 episode), ‘Playhouse 90’ (1956–1959, 2 episodes), ‘Bonanza’ (1959, 1 episode), ‘The Twilight Zone’ (1960, 2 episodes), ‘Route 66’ (1960–1961, 2 episodes) and ‘The Alfred Hitchcock Hour’ (1963, 1 episode) among many others.
Her performance in a single episode of the NBC anthology series ‘The Dick Powell Show’ in 1962 earned her a nomination for ‘Outstanding Single Performance by an Actress in a Leading Role’ at the Emmy Award held that year. She went on to feature in another episode of the series in 1963.
Her performances in Broadway productions during this time included plays ‘Debut’ (1956), ‘Roman Candle’ (1960) and ‘Mary, Mary’ (1962).
The most memorable portrayal of Inger was that of Katrin "Katy" Holstrum, a young Swedish housekeeper in the American situation comedy television series ‘The Farmer's Daughter’. The series aired on ABC for three seasons encompassing 101 episodes starting from September 20, 1963 to April 22, 1966. It became a huge success garnering Inger most deserved fame and recognition and made her a household name.
Her remarkable performance in ‘The Farmer's Daughter’ starring opposite William Windom won her ‘Best TV Star – Female’ award at the ‘Golden Globe Awards’, the ‘Favorite Female Performer’ award at the ‘TV Guide Award’ and an ‘Emmy Award’ nomination in the category of ‘Outstanding Continued Performance by an Actress in a Series (Lead)’, all in 1964.
Continue Reading Below
After the success of ‘The Farmer's Daughter’, Inger appeared in a few other TV productions that include the American variety show ‘The Danny Kaye Show’ (1966, 1 episode), the American comedy and variety show television series ‘The Smothers Brothers Comedy Hour’ (1967, 1 episode) and the made-for-television adventure movie ‘The Mask of Sheba’ (1970).
The then governor of California Edmund G. "Pat" Brown inducted her to the Advisory Board of the UCLA Neuropsychiatric Institute in January 1966. She was also made the Chairman of the California Council for Retarded Children.
Her next notable big-screen flick was the Gene Kelly directed American bedroom farce comedy ‘A Guide for the Married Man’ that released on May 25, 1967. She starred along with Walter Matthau and Robert Morse in the film, which became a commercial success and emerged as a cult classic.
Her other notable films are the 1968 western movie ‘Firecreek’, the 1968 American dramatic thriller film ‘Madigan’, the 1968 Western, mystery film ‘5 Card Stud’, and the 1968 American DeLuxe Color revisionist Western film ‘Hang 'Em High’.
Personal Life & Legacy
She married her agent Anthony Soglio on July 9, 1955, but the marriage ended after three years on August 18, 1958.
According to sources Inger fell for her co-stars including Bing Crosby, Harry Belafonte and James Mason. She also had a brief affair with Anthony Quinn, the director of the film ‘The Buccaneer’. However, none of these relationships were successful and this left her gloomy and depressed every time.
Her companion Lola McNally found her lying on the kitchen floor of her Hollywood Hills home on the morning of April 30, 1970. She was rushed to the hospital but died on the way in ambulance. According to Dr. Thomas Noguchi, the then Chief Medical Examiner-Coroner for the County of Los Angeles, Inger died due to "acute barbiturate poisoning".
Although the official documents of the Los Angeles County Coroner's Office mention that Inger committed suicide by taking an overdose of barbiturates, her family and friends till present could not or do not accept the idea that she took her own life
After her death, African-American producer and actor Ike Jones revealed that he and Inger married secretly in 1961. Such claim was backed by her brother Carl O. Stensland in the court following which Los Angeles Superior Court Commissioner A. Edward Nichols made Jones the administrator of Inger’s estate.

See the events in life of Inger Stevens in Chronological Order 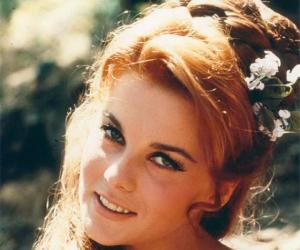