(Known for His Roles in the Series 'The Wire' and 'Luther')

Idris Elba is an award winning English actor, producer, musician, and disk jockey. He is known for his lead role in the British crime drama series 'Luther,' a role which won him the Golden Globe Award. He is also known for his portrayal of Nelson Mandela in the film 'Mandela: Long Walk to Freedom' and his supporting role in the popular superhero film 'Thor'. Born in Hackney, London, he began acting during his school days. His first important role was in a British TV series called 'Bramwell'. Over the next few years, he appeared in TV series such as 'Law & Order' and 'The Wire'. He also became widely known for his roles in movies, such as 'The Unborn, 'Legacy', Thor’ and 'Mandela: Long Walk to Freedom'. In his career so far, he has been nominated for the Golden Globe five times, out of which he won one, for his performance in ‘Luther’. He has been nominated for the Emmy Award five times as well. He was also named in TIME Magazine’s list of 100 Most Influential People in the World in 2016. As a singer, he has a released a studio album ‘Murdah Loves John’ and a few EPs. Christian Bale
6th September In History
DID WE MISS SOMEONE?
CLICK HERE AND TELL US
WE'LL MAKE SURE
THEY'RE HERE A.S.A.P
Quick Facts

British People
Actors
Rhythm & Blues Singers
British Men
Tall Celebrities
Childhood & Early Life
Idris Elba was born as Idrissa Akuna Elba on 6th September 1972 in Hackney, London, in the UK. His father Winston, who worked for a Ford motor factory in Dagenham, was from Sierra Leona, and his mother, Eve, was from Ghana.
Elba shortened his name to ‘Idris’ while attending school at Canning Town. It was during this time that he got involved in acting. His first role was in the play ‘The Stage’, which he had landed after answering an advertisement in a newspaper.
He also started a DJ company with his friends. He then received a grant from the Prince’s Trust due to which he was able to get a place in the National Music Theatre. 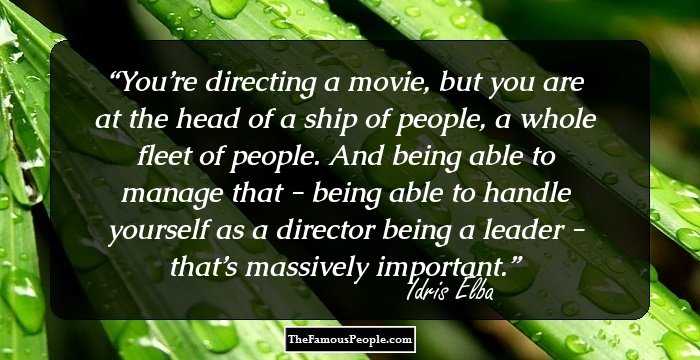 Continue Reading Below
Acting Career
Idris Elba’s acting career began with guest as well as minor roles in the TV series ‘The Bill’, ‘Bramwell’, ‘The Governor’, ‘Family Affairs,’ ‘Ultraviolet’ and ‘London’s Burning’. He made his film debut in 1999, with a supporting role in the French film ‘Belle Maman’ which was directed by Gabriel Aghion.
He gained considerable popularity for his main role in the British crime drama series ‘The Wire’. It was appreciated by the critics as well as loved by the audience. It also won several awards. Over the years, the series has been regarded by many as one of the best TV series of all time.
He was seen in many TV films as well as feature films over the next few years. Some of his films were ‘Buffalo Soldiers’ (2001), ‘The Gospel’ (2005), ‘Daddy’s Little Girls’ (2007), ‘The Human Contract’ (2008), ‘The Unborn’ (2009) and ‘Obsessed’ (2009). Since 2010, he has been playing the titular lead role in the TV series ‘Luther’, for which he gained critical acclaim.
His popularity reached even greater heights after he played an important role in the 2011 superhero film ‘Thor’. Directed by Kenneth Branagh, the film was based on the famous Marvel comics’ superhero of the same name. The movie was a commercial success and was also met with mostly positive reviews. Elba reprised his role in the 2013 sequel ‘Thor: The Dark World’.
In 2013, he played the famous revolutionary Nelson Mandela in the biopic ‘Mandela: Long Walk to Freedom.’ The film was, however, a commercial failure and was met with mixed reviews. Other films he appeared in over the next few years include ‘Second Coming’ (2014), ‘The Gunman’ (2015) ‘The Jungle Book’ (2016), and ‘Star Trek Beyond’ (2016).
In 2017, he played the lead role in the film ‘The Dark Tower’. Directed by Nikolaj Arcel, the film was a commercial success. The same year, he appeared in the films ‘Molly’s Game’ and ‘The Mountain between Us’. He also reprised his role in ‘Thor: Ragnarok,’ the second sequel to the 2011 superhero film ‘Thor’. The film was a huge success commercially. 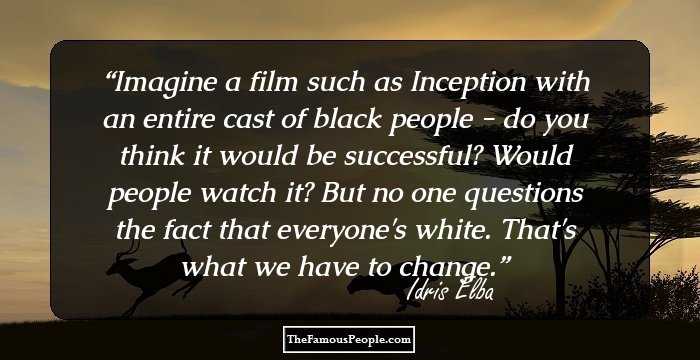 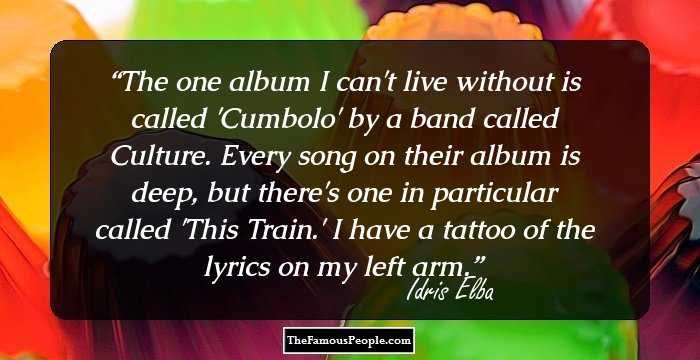 Quotes: Culture
Awards & Achievements
Idris Elba has earned many awards and nominations for his brilliant performances on screen. He won the Golden Globe Award in the category of ‘Best Actor in Miniseries or TV film’, for his performance in ‘Luther’ in 2011. He has also earned four other nominations for the Golden Globe Award; twice for his role in ‘Luther’, and once each for his performances in the biopic ‘Mandela: Road to Freedom’ and the war film ‘Beasts of No Nation’.
Other awards won by him include the ‘BET Award for Best Actor’ for his role in ‘The Losers’ in 2010, as well as the ‘Black Reel Award for Best Actor’ for his role in ‘Luther’ in 2012.
He has been nominated for the Emmy Awards five times; four times for his work in ‘Luther’ and once for his role in the drama series ‘The Big C’.
He was listed by Time Magazine as one of the 100 Most Influential People in the World in 2016.
For his contribution to drama, he was appointed an OBE (Officer of the Order of the British Empire) in the 2016 Queen's New Year’s Honors.
Personal Life
Idris Elba married Henne Norgard in 1999. They had one daughter. However, the couple divorced after four years.
He later married Sonya Hamlin in April 2006. Their marriage was annulled after a few months.

See the events in life of Idris Elba in Chronological Order 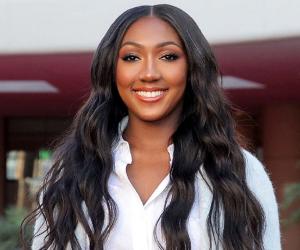