Born In: Province of Badajoz, Spain

Hernando de Soto was a Spanish explorer and conquistador who participated in the conquests of Central America and Peru. He is credited to have led the first European expedition into the territory of the modern-day United States, and discovered the Mississippi River. Born into a poor family, he developed an early interest in exploration. His parents wanted him to become a lawyer but de Soto had already set his mind upon exploring the world. He was a skilled horseman and in spite of his young age was selected by Pedro Arias Dávila to accompany him on his expedition to the West Indies. He eventually became involved in slave trade which proved to be very successful. His reputation as a skilled explorer and astute businessman spread and soon he was made second in command on Pizarro’s expedition to explore and conquer Peru. He played a major role in the conquest of Peru and became a wealthy man following its conquest. His successes further fuelled his passion for exploration and he set off on an expedition to North America. His North American expedition was an ambitious and vast undertaking, ranging from exploring the southeastern United States for precious metals to seeking a passage to China. Even though the expedition was unsuccessful in achieving what it primarily sought, it had several major consequences
Continue Reading Below Born In: Province of Badajoz, Spain

451
DID WE MISS SOMEONE?
CLICK HERE AND TELL US
WE'LL MAKE SURE
THEY'RE HERE A.S.A.P
Quick Facts

Spanish People
Spanish Explorers
Childhood & Early Life
Hernando de Soto was born around 1500 in Jerez de los Caballeros, Badajoz, Extremadura, Spain. His parents were poor in spite of belonging to nobility.
He found a generous patron named Pedro Arias Davila who funded de Soto's education at the University of Salamanca. His parents wanted him to become a lawyer but young Hernando was more interested in exploring the world. 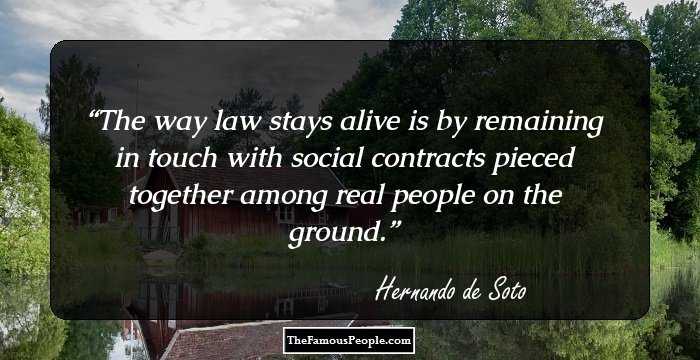 The Sexiest Men Of 2020, Ranked
Later Life
Hernando de Soto became a skilled horseman while still a teenager. Davila, the governor of Darién, invited de Soto to join him on his 1514 expedition to the West Indies as the captain of a cavalry exploration troop.
He proved to be a good explorer as well as a trader. He became engaged in slave trade while in Panama and soon acquired a small fortune. Over the years he formed successful partnerships with Hernán Ponce de León and Francisco Campañón and established himself as a prosperous businessman by 1520.
During the late 1520s, reports of gold located south of Darién on the Pacific coast were making the rounds. He lent two ships to explorer Francisco Pizarro who planned to investigate the reports. Pizarro in turn named de Soto his chief lieutenant for the expedition.
The conquest of Peru, led by Pizarro and de Soto began in 1532. Hernando de Soto, with his expertise as a horseman played an important role in the Spanish victory over the Incas at Cajamarca. They captured the Inca king Atahualpa who was later killed, and plundered the Inca’s properties.
Hernando de Soto received a hefty share from the plunder of the Inca’s wealth and returned to Spain in 1536. Back home he received much respect and adulation for his achievements. Considerably wealthy by now, he could have settled into a comfortable life, but he soon grew restless for more adventure.
During this time he heard about Cabeza de Vaca's exploration of Florida and the other Gulf Coast states, and was motivated to explore the regions himself. His primary motive was to seek the riches which he believed lay hidden in those unexplored lands.
He started planning for his voyage to North America and assembled a fleet of 100 ships and selected 700 able bodied men to accompany him. He set sail in April 1538. Enroute to North America, the expedition stopped in Cuba where they helped to rebuild the city of Havana after the French had plundered it.
They left Cuba and set forth for Florida in May 1539. De Soto and his men spent the next three years exploring the area during which they faced attacks from the natives. The crew also journeyed to Georgia and Alabama, and then headed westward, discovering the mouth of the Mississippi River in the process.
The expedition proved to be a perilous one. Even after three years the men were yet to come across the treasures they were seeking. Moreover, nearly half of the men and several horses had died from disease or in the battles with the natives. Hernando de Soto himself did not live to see the completion of the expedition.
Major Expedition
Hernando de Soto is best remembered for leading the first European expedition deep into the interiors of what is today the United States. During the course of his exploration he discovered the Mississippi River and became the first documented European to cross it. Although he could not achieve his dream of finding gold and silver by way of this expedition, the expedition ultimately had numerous far-reaching consequences.
Personal Life & Legacy
He married Isabel de Bobadilla, the daughter of his mentor Pedro Arias Davila, in 1537.
He had embarked on an expedition to North America in 1538. He fell ill while staying in the village of Guachoya over the course of his explorations, and died on May 21, 1542. It is believed that his body was buried in the Mississippi River.
Many parks, towns, counties, and institutions have been named after Hernando de Soto including DeSoto County (Florida), DeSoto State Park (Alabama), DeSoto Caverns (Alabama), and DeSoto Falls (Lumpkin County, Georgia).
You May Like