American singer John Denver is rated among one of the most influential voices in music that has emerged in the last century and to this day his songs are popular in most parts of the English speaking world. It is often said that during the 1970s John Denver was peerless as far as musical appeal was concerned and that had a lot to do with the fact that his songs spoke about things that were vibrant and varied like country life, nature or about his own thoughts on love. After the swinging 60s, Denver ushered in a new era of music and went on to become one of the most loved music stars in the entire United States and indeed in most parts of the world. However, what set him apart from plenty of singers of the era was the fact that he was also an activist and this side of his personality shone through in his songs. In addition to that, he was a singer who wrote and composed his songs on his own, other than on occasions when he participated in group efforts with other singers or music groups. Last but not the least; Denver had also featured in movies which went on to become quite famous due to his presence. Read on to know more about his life American Celebrities
Folk Singers
Lyricists & Songwriters
Folk Rock Singers
American Men
Childhood & Early Life
On December 31, 1943 Henry John Deutschendorf Senior and Emma Louise Swope gave birth to a child in Roswell, New Mexico named Henry John Deutschendorf Junior, who was later known as John Denver. His father was a Lieutenant Colonel in the US Air Force and hence the family often moved from one city to another.
John Denver was gifted with a Gibson guitar, when he was only 2 years old, by his grandmother and that was how he was initiated into the world of music.
He continued to dabble in music throughout his teenage years and only joined a band when he started going to ‘Texas Tech University’ located in Lubbock to study architecture. The band that he was a part of was known as ‘The Alpine Trio’ and it was after joining that band that he adopted the moniker John Denver.
In the year 1963, Denver discontinued his studies at the ‘Texas Tech University’ and decided to try his fortune in the world of music in Los Angeles. Once in Los Angeles, it took him two years to find a folk group called ‘The Mitchell Trio’ and that was well and truly the tentative beginnings of a professional music career. 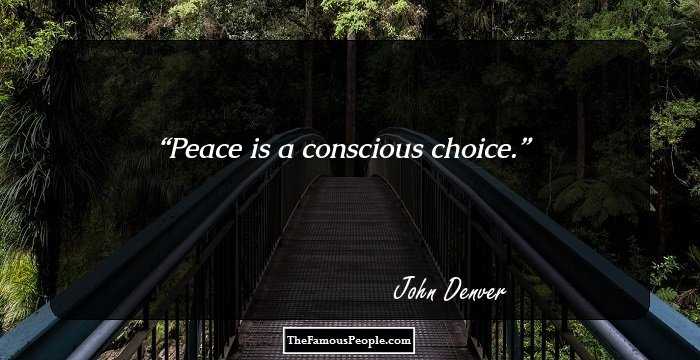 Quotes: Peace
Continue Reading Below
Career
It as in the year 1969 that John Denver took his most important career decision and decided to abandon being part of different bands. Instead he decided to be a solo performer and his very first album was hence produced. It was titled ‘Rhymes & Reasons’.
The biggest turning point in his career came in the year 1969 when the song ‘Leaving on a Jet Plane’ was released and became a smash hit instantly. Interestingly, the song had been recorded two years prior to its release.
Denver released two albums; ‘Take Me to Tomorrow’ and ‘Whose Garden Was This’ in the year 1970. A year later his next album became another huge hit thanks to the song ‘Take Me Home Country Roads’ and sold a million copies.
Throughout the 1970s John produced one hit after another under the guidance of his manager and producer Jerry Weintraub. Some of the smash hits included ‘Sunshine on my Shoulders’, ‘Annie’s Song’, ‘Thank God I’m a Country Boy’, among singles.
The talented singer also became a known face on television during his career and became a guest in the hugely popular ‘The Muppet Show’ in 1974. Three years later he starred in the film ‘Oh God’ and although it wasn’t a hit it showed that Denver was an extremely marketable brand.
Along with author Werner Erhard and physicist Robert Fuller, this renowned artist successfully established ‘The Hunger Project’ in the year 1977 and it was only the beginning of his future work as an influential peace activist. 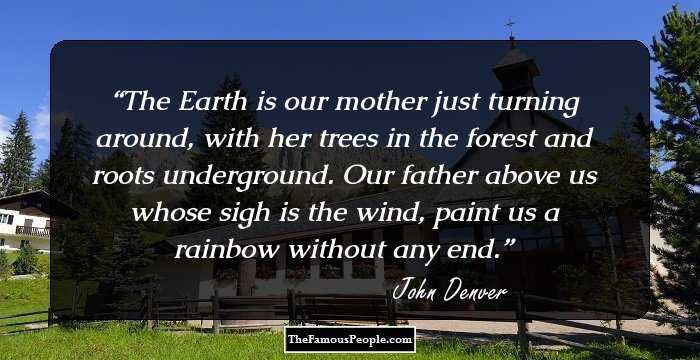 Major Works
John Denver’s most famous work in his career has to be his first smash hit that is still regarded as his best production ever. The song is ‘Leaving on a Jet Plane’ and it is still considered among the best songs that have ever been composed on farewell and travel.
Awards & Achievements
The ‘Country Music Association’ awarded John with the ‘Entertainer of the Year’ Award in the year 1975. 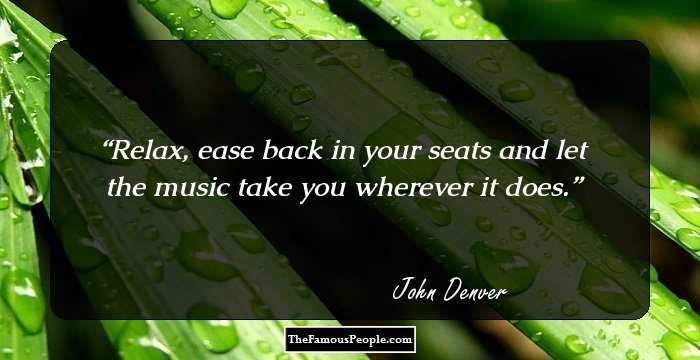 Quotes: You, Music
Personal Life & Legacy
Denver got married to Annie Martell in the year 1968. The couple had two children; a son named Zachary and a daughter named Anna Kate. However the marriage culminated in divorce twelve years later.
This renowned singer married for the second time in the year 1988 to Cassandra Delaney, an actress from Australia. The couple had one daughter named Jesse Belle but this relationship also ended in a divorce.
Denver was killed under tragic circumstances on October 12, 1997 when he could not control his aircraft while trying to fly it as an experiment at ‘Pacific Grove Peninsula’ in California.

Quotes By John Denver | Quote Of The Day | Top 100 Quotes

See the events in life of John Denver in Chronological Order