Gwyneth Kate Paltrow is an American actress, singer, and author of cookbooks. She made her acting debut in a film directed by her father. Subsequently, she came up with brilliant performances in ‘Se7en,’ ‘Flesh and Bone’ and the British period drama ‘Emma’ for which she won accolades. After appearing in films like ‘Sliding Doors’ and ‘A Perfect Murder,’ she received global recognition for her performance in ‘Shakespeare in Love,’ for which she won an ‘Academy Award’ for ‘Best Actress.’ Occasionally, she also appeared in comedy movies, such as ‘Shallow Hal’ and ‘The Royal Tenenbaums.’ She excelled in ‘Proof,’ playing the troubled daughter of a late mathematics genius. She also became part of big budget studio films including the comic book-based ‘Iron Man.’ She also won an ‘Emmy Award’ for her role as Holly Holliday in an episode titled ‘The Substitute’ on the hit TV show ‘Glee.’ She is married to Chris Martin, the lead vocalist of ‘Coldplay’ and they have two children together. She is also the face of American fashion brand ‘Coach,’ owner of the lifestyle company ‘Goop.com,’ and author of two cookbooks. She has emerged as an admired style icon among her fans. Apple Martin
DID WE MISS SOMEONE?
CLICK HERE AND TELL US
WE'LL MAKE SURE
THEY'RE HERE A.S.A.P
Quick Facts

American People
American Women
California Actresses
University Of California, Santa Barbara
Libra Actresses
Childhood & Early Life
Paltrow was born on September 27, 1972, in Los Angeles, California. She is the daughter of actress Blythe Danner and the late film producer-director Bruce Paltrow. She has a younger brother named Jake Paltrow.
Paltrow's father was Jewish and her mother is a Christian.
She grew up in Santa Monica where she attended ‘Crossroads School’ before enrolling at the ‘Spence School’ in New York City. She briefly studied anthropology at the ‘University of California’ before dropping out to act.
At 15, she spent a year as an exchange student in Talavera de la Reina, a city in the western part of the province of Toledo, Spain, and learned to speak Spanish. 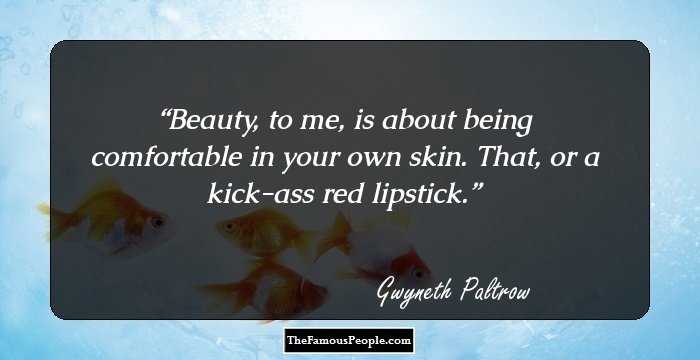 Quotes: Me
Continue Reading Below
Career
Paltrow debuted in ‘High,’ a TV film her father directed in 1989. After watching her mother’s performance at the ‘Williamstown Theatre Festival’ in Massachusetts, she made her professional stage debut there the following year.
Between 1991 and 1993, she appeared in the Travolta-starrer ‘Shout,’ the Steven Spielberg film ‘Hook’ as the young Wendy Darling, and films, such as ‘Cruel Doubt’ and ‘Deadly Relations.’
She was noticed in the drama ‘Flesh and Bone’ as the much-younger girlfriend of James Caan. The film also starred Meg Ryan and Dennis Quaid. ‘The New York Times’ described Paltrow as a ‘scene-stealer.’
In the 1995 hit thriller ‘Se7en,’ she played Brad Pitt's high school sweetheart and wife, earning a ‘Satellite’ award nomination. In the film, Pitt and Morgan Freeman played homicide detectives involved in a sadistic serial killer case.
She played the title role in ‘Emma’ in 1996, which was based on a novel by Jane Austen. She shared screen space with Alan Cumming, Toni Collette, Ewan McGregor, and Jeremy Northam.
She played the lead in two films in 1998 – ‘Sliding Doors,’ a romantic-comedy and ‘Great Expectations,’ an adaptation of Dickens’ novel. In ‘Great Expectations,’ she was seen alongside actors like Ethan Hawke, Robert De Niro, Anne Bancroft, and Chris Cooper.
She acted as Marge Sherwood in ‘The Talented Mr. Ripley,’ a 1999 psychological thriller film which also starred Matt Damon, Jude Law, Cate Blanchett, Philip Seymour Hoffman, Jack Davenport James Rebhorn, and Celia Weston.
She made her singing debut in the 2000 film ‘Duets’ in which she performed a cover version of Smokey Robinson's ‘Cruisin'.’ The song was released as a single and reached number one in Australia.
She played Margot Tenenbaum in ‘The Royal Tenenbaums,’ a 2001 comedy-drama film directed by Wes Anderson. The film also starred Danny Glover, Gene Hackman, Anjelica Huston, Bill Murray, Ben Stiller, Luke Wilson, and Owen Wilson.
Continue Reading Below
‘Shallow Hal,’ a 2001 romantic comedy film, starred her alongside Jack Black and Jason Alexander. It grossed more than $141 million at the box office and earned Paltrow a nomination for the ‘Teen Choice Award.’
She was cast as Catherine Llewellyn in ‘Proof,’ a 2005 film directed by John Madden and starring Anthony Hopkins, Jake Gyllenhaal, and Hope Davis. It was based on David Auburn's Pulitzer Prize-winning play.
In 2005, she became the face of a perfume brand called ‘Estée Lauder Pleasures.’ She appeared in Chicago to sign bottles of the perfume and promoted the brand in New York with three other models
In 2007, she was signed for the ‘PBS’ television series ‘Spain... on the Road Again.’ The following year, she launched the weekly lifestyle newsletter ‘Goop,’ encouraging readers to 'nourish the inner aspect.’
‘Iron Man,’ a superhero film starring Robert Downey, Jr. as Tony Stark and Paltrow as his personal assistant Pepper Potts, released in 2008. She went on to reprise her role as Pepper Potts in ‘Iron Man’ sequels. She also reprised her role in other ‘Marvel’ films, such as ‘Spider-Man: Homecoming.’
She appeared in the 2011 medical thriller ‘Contagion’ which was directed by Steven Soderbergh. Apart from Paltrow, the film also starred actors like Marion Cotillard, Bryan Cranston, Matt Damon, Laurence Fishburne, Jude Law, Kate Winslet, and Jennifer Ehle.
She played Phoebe in ‘Thanks for Sharing,’ a comedy-drama film which premiered at the 2012 ‘Toronto International Film Festival’ to moderately favorable reviews. It follows three people trying to recover from sexual addiction.
Since her first book ‘Spain... A Culinary Road Trip’ in 2008, she has written ‘My Father's Daughter: Delicious,’ ‘Easy Recipes Celebrating Family and Togetherness,’ and Notes from the Kitchen Table’ among other culinary books. 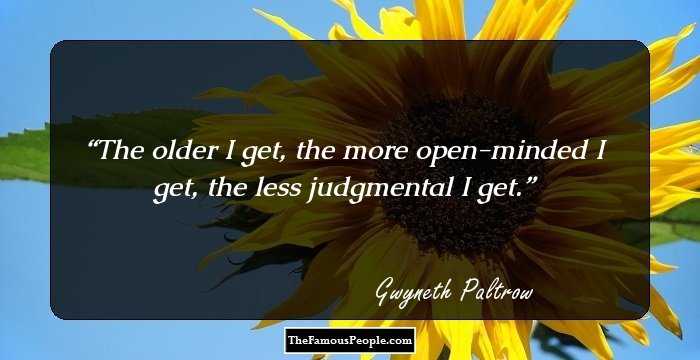 Continue Reading Below
Major Works
In 1998, Paltrow starred in ‘Shakespeare in Love,’ portraying Viola de Lesseps, the fictional lover of William Shakespeare. The film earned more than $289 million at the box office and she won many accolades.
Holly Holliday, portrayed by Gwyneth Paltrow, is a recurring fictional character from the ‘Fox’ musical comedy-drama series ‘Glee.’ Her performance attracted positive reviews and earned her an ‘Emmy’ award in 2011.
She had a role in ‘Iron Man 2’ (2010) and ‘Iron Man 3’ (2013). While the former earned US$623.9 million, the latter went on to gross US$1.215 billion. She also had a role in ‘Spider-Man: Homecoming’ (2017), ‘Avengers: Infinity War’ (2018), and ‘Avengers: Endgame’ (2019).
Awards
In 1998, Paltrow won numerous awards, including the ‘Academy Award,’ ‘Golden Globe Award,’ and two ‘Screen Actors Guild Awards’ for her outstanding performance in ‘Shakespeare in Love.’ She also won a ‘MTV Movie Award’ for ‘Best Kiss.’
In 2010, she won a ‘Primetime Emmy Award’ for ‘Outstanding Guest Actress in a Comedy Series’ for her role in ‘Glee.’ She was nominated for many awards for her performance in the ‘Iron Man’ franchise. 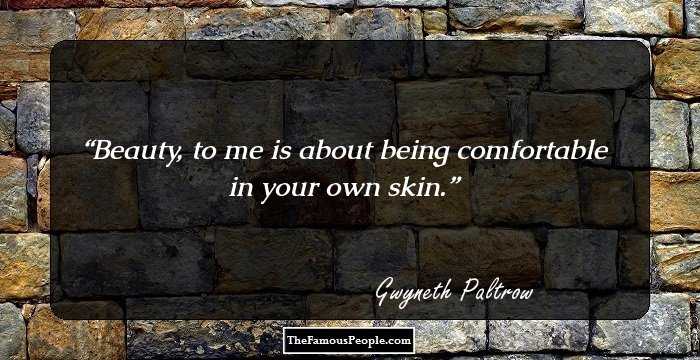 Quotes: Me
Personal Life & Legacy
Paltrow has dated Brad Pitt and Ben Affleck. She married Chris Martin of the British rock group ‘Coldplay’ in 2003 and they have two children - Apple Blythe Alison and Moses Bruce. They got separated in March 2014.
Paltrow filed for divorce in April 2015, which was finalized on July 14, 2016.
She then dated producer Brad Falchuk and got engaged to him on January 2018. The two got married on September 2018.
Retired optometrist Terry Sanderson sued Paltrow for $3.1 million. He claimed that Paltrow caused him permanent traumatic brain injury after colliding with him on a ski slope at Deer Valley Resort in Park City, Utah.
Trivia
This American actress named her daughter Apple because apples are whole, sweet, and crisp.
This actress narrated a short film for ‘United Nations Children's Fund’ (UNICEF) which was meant to help raise money to prevent children being born with the HIV virus.
In April 2013, Paltrow was named ‘People’ magazine's ‘Most Beautiful Woman.’

Quotes By Gwyneth Paltrow | Quote Of The Day | Top 100 Quotes

See the events in life of Gwyneth Paltrow in Chronological Order