Glenn Close is an American stage and film actress best known for her roles as a psychotic stalker in the movie ‘Fatal Attraction’ and the cunning and manipulative ‘Marquise de Merteuil’ in ‘Dangerous Liaisons’. She is one of the most versatile actresses and is greatly acclaimed for her choice of unorthodox roles. Good looking with a high forehead and prominent cheekbones, she has the classy looks to play an evil seductress or a deranged aristocrat with the same élan. She began her acting career with a Broadway production and has performed in a number of major plays and musicals. She played the role of Norma Desmond, a faded actress of the silent film era, in the Andrew Lloyd Webber production of Sunset Boulevard winning the prestigious Tony Award for Best Actress in a Musical. She made an easy transition to movies earning an Academy Award nomination for her role in her debut ‘The World According to Garp’. She quickly established herself as a character actress and rose to fame with her portrayal of the deranged ex-lover Alex Forrest in ‘Fatal Attraction’, a role for which she was nominated for the Academy Award for Best Actress. She is also a crusader for social change and campaigns to eradicate the stigma surrounding mental illnesses. 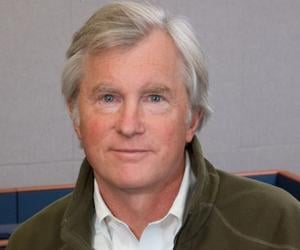 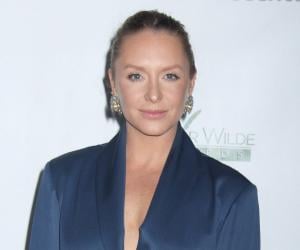 American People
Connecticut Actresses
Pisces Actresses
American Actresses
Actresses Who Are In Their 70s
Childhood & Early Life
Glenn Close was born into an elite upper class family in Connecticut. Her father William Close was a doctor who served as a personal physician to the African dictator Mobutu Sese Seko, and her mother was a homemaker. She has three siblings.
Her parents joined a cult group, the Moral Re-Armament (MRA) when she was seven years old. The group sent its members all over the world to convert people and her family moved to Congo when she was 13.
She attended Rosemary Hall preparatory school in Greenwich, and joined an MRA singing group called ‘Up With People’ with whom she extensively traveled all over Europe and the U.S.
She broke off from MRA and enrolled in the College of William and Mary where she studied drama and theatre. She developed her acting skills in the college’s theatre department. 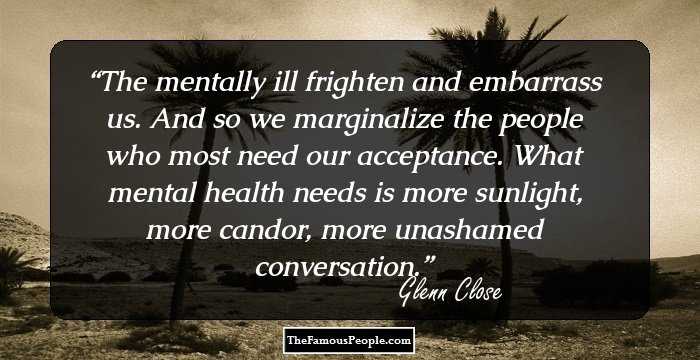 After college, Glenn Close moved to New York and joined the Phoenix Theatre Company. She began her acting career with the Broadway play, ‘Love for Love’ in 1974. Initially, she loved doing theatre so much that she did not think about going into movies, which she eventually did.

She made her Hollywood debut in 1982 with the comedy drama ‘The World According to Garp’. She was nominated for Academy Award for Best Supporting Actress for her role.
She acted in ‘The Big Chill’ in 1983 and followed it with ‘The Natural’ in 1984 and ‘Maxie’ in 1985.
In 1987, she was offered the role of Alex Forrest in ‘Fatal Attraction’ which was to become the first of the highly unconventional roles she often portrays.
The highly acclaimed ‘Dangerous Liaisons’ followed in 1988 which established her talent for playing on-screen vamps.
The decade of 1990’s proved very productive for her with movies like ‘Hamlet’ (1990), ‘Meeting Venus’ (1991), ‘The Paper’ (1994) and ‘Mars Attacks!’ (1996). Her most memorable role was as Cruella De Vil, the evil fashionista in ‘101 Dalmatians’ in 1996.
Throughout the 1990’s, she was also active in television, making appearances in shows like ‘Sarah, Plain and Tall’ (1991), ‘Skylark’ (1993), and ‘In the Gloaming’ (1997).
She began the new millennium with ‘102 Dalmatians’ in which she reprised the role of Cruella De Vil. Her other movies for the decade include: ‘South Pacific’ (2001), ‘Le Divorce’ (2003), ‘Heights’ (2004), ‘Nine lives’ (2005), and ‘Evening’ (2007).
Her television career in the decade was also very impressive. She appeared in ‘The Lion in Winter’ in 2004 and played the role of Patty Hewes in the highly successful series ‘Damages’ which ran for five seasons from 2007 till 2012.
Continue Reading Below
In 2011, she starred as a woman living as a man in ‘Albert Nobbs’, a drama film, reaffirming her penchant for choosing unconventional roles.

In 2020, she starred in the Netflix film ‘Hillbilly Elegy’ and received an Academy Award, Golden Globe and SAG Award nomination for Best Supporting Actress for her performance. In the same year, she was also seen in the movie ‘Four Good Days’. 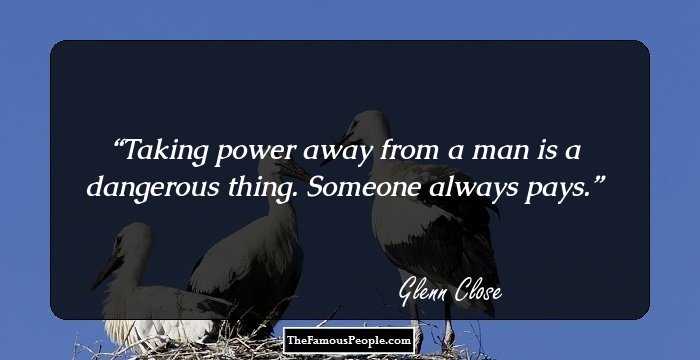 Quotes: Power
Major Works
Her debut film ‘The World According to Garp’ (1982) became one of her most successful performances as it earned the newcomer an Academy Award nomination for Best Actress in a Supporting Role.
Her role as the violent and mentally disturbed ex-lover in ‘Fatal Attraction’ (1987) not only had her nominated for an Academy Award, but also proved to the world what a fine actress she was.
Her portrayal of the manipulative Marquise de Merteuil in the 1988 drama film ‘Dangerous Liaisons’ was critically acclaimed. The film was nominated for seven Academy Awards and it won three.
She played the role of Cruella De Vil in ‘101 Dalmatians’ in 1996 which was well loved by the audiences. She earned several award nominations for this role.
One of Close’s most appreciated roles is that of the ruthless lawyer Patty Hewes in the legal thriller television series ‘Damages’ for which she won many awards. She played a brilliant but unethical lawyer who would go to any lengths to get what she wanted.
Continue Reading Below
Her depiction of Albert Nobbs—a woman living as a man—in the 2011 movie of the same name was widely appreciated even though the film itself received mixed reviews. She was hailed for her courage in taking up such an unconventional role.
Awards & Achievements
Glenn Close won The National Board of Review Award for Best Supporting Actress in 1982 for her role of Jenny Fields in her debut film ‘The World According to Garp’.
She was presented the German Golden Camera award for Best International Actress in 1988 for her role as Marquise Isabelle de Merteuil in ‘Dangerous Liaisons’.
She was the recipient of The Golden Globe Award for Best Actress – Miniseries or Television Film in 2004 for her role as Queen Eleanor in ‘The Lion in Winter’.
She won The Golden Globe Award for Best Actress–Television Series Drama for her role as Patty Hewes in the legal thriller series ‘Damages’ in 2007. She also won the Primetime Emmy Award for Outstanding Lead Actress–Drama Series for the same role in 2007-08.
Family & Personal Life

Apart from her marriages, she was romantically involved with producer John Starke, with whom she has a daughter.

She founded BringChange2Mind, a campaign to end the stigma and discrimination faced by people suffering from mental illnesses.
Trivia
She keeps all her costumes in a personal collection even after the filming is over.
A late bloomer, she made her film debut at the age of 35.
She is good friends with the actress Meryl Streep whom she has known for many years.
She is an animal lover who often writes for the blog Fetchdog.com.

See the events in life of Glenn Close in Chronological Order