George Robert Stephanopoulos is an American journalist, political critic, and former Democratic advisor. He served as a Senior Advisor to President Bill Clinton. Currently, he is the chief political correspondent and chief anchor of ABC News, the host of the network’s ‘This Week,’ and the co-anchor of ‘Good Morning America’. Stephanopoulos also serves as a substitute anchor for ABC’s ‘World News Tonight’. Born in Fall River, Massachusetts, to Greek parents Robert George Stephanopoulos and Nickolitsa Gloria, he became a disciple of the Greek Orthodox faith and considered entering the priesthood in his youth. Upon his graduation from Columbia University, he even studied theology at University of Oxford. Later, he received an Honorary Doctor of Laws from New York City’s St. John's University. Extremely benevolent and big hearted, the American journalist is also the founder of Next Generation Initiative, a non-profit organization that helps students learn real-world skills through experience. He currently also serves on the Council on Foreign Relations. Stephanopoulos is married to actress Alexandra Wentworth. The couple has two daughters. George Robert Stephanopoulos was born on February 10, 1961, in Fall River, Massachusetts. His father, Robert George Stephanopoulos, is a Greek Orthodox priest as well as a dean emeritus of New York City’s Archdiocesan Cathedral of the Holy Trinity. His mother, Nickolitsa "Nikki" Gloria, worked with the National News Service as the director of the Greek Orthodox Archdiocese of America.

Stephanopoulos moved to Cleveland to study at Orange High School in Pepper Pike. Later, he attended Columbia University in New York and graduated from there in 1982 with a Bachelor of Arts degree in political science. While at the university, he was a sports broadcaster for their radio station WKCR-FM.
He then took a job in Washington, D.C. as an advisor to Democratic Congressman Ed Feighan of Ohio. In 1984, he earned his Masters of Arts in theology from Balliol College at the University of Oxford.
Continue Reading Below
You May Like

The Hottest Male Celebrities With The Best Abs
Career
George Stephanopoulos started his political career in 1988 when he worked on the Michael Dukakis U.S. presidential campaign. After the campaign, he served Dick Gephardt, U.S. House of Representatives Majority Leader for some time.
He then became a leading member of Bill Clinton's 1992 U.S. presidential campaign where he served as the de facto press secretary. After Clinton was re-elected in 1996, Stephanopoulos resigned from his administration.
Following his departure from the White House, he became a political analyst for ABC News. While there, he served as a correspondent on ‘World News Tonight’; ‘This Week’, ABC's ‘Sunday morning public affairs program; and ‘Good Morning America,’ along with other various special broadcasts. In 2008, he launched a blog titled George's ‘Bottom Line’ on the network’s website.
On January 10, 2010, he announced his departure from ‘This Week’ as the permanent host. However, after Stephanopoulos’ successor Christiane Amanpour departed the show, he returned as the host in December 2011. In 2014, he became the Chief Anchor at ABC News.
Major Works
On April 16, 2008, George Stephanopoulos was the co-moderator of the Democratic Party presidential debate between New York Senator Hillary Clinton and Illinois Senator Barack Obama for the 2008 election cycle.
While the debate earned record ratings, Stephanopoulos, along with co-moderator Charles Gibson, was heavily criticized for focusing on controversies that had cropped up during the campaign rather than on issues of national importance. Later, Stephanopoulos clarifies that the issues discussed in the campaign had not been covered in any of the previous debates.
On January 7, 2012, Stephanopoulos co-moderated a debate among Ron Paul, Rick Santorum and Mitt Romney. During the debate, the American journalist asked Romney whether the former Massachusetts governor felt that the U.S. Supreme Court should upend a 1965 ruling that a constitutional right to privacy blocks states from prohibiting contraception.
In response to the query put across by Stephanopoulos, Romney retorted that it was a ridiculous question. Later, during the fall presidential campaign, Barack Obama’s campaigners used the response in their favour.
In Popular Culture
The character of Henry Burton in Joe Klein's famous novel ‘Primary Colors’ has been inspired by George Stephanopoulos.
Continue Reading Below
In the 1995 movie ‘The American President’, Michael J. Fox's character, Lewis Rothschild was modelled after the journalist cum political critic.
Stephanopoulos has appeared in an episode titled "An Affair to Remember" of the TV series of ‘Spin City’. He was also featured in the ‘Pawn Stars’ episode "Buy the Book".
In 2013, he played himself in the show ‘House of Cards.’ The following year, he appeared as himself in an episode of ‘Agents of S.H.I.E.L.D.’
Charity to Clinton Foundation & Conflict of Interest as a Journalist
From 2012 to 2014, George Stephanopoulos donated $75,000 to the Clinton Foundation. However, he did not disclose the facts about these donations to ABC News or to his viewers. After the exposure of the donations by ‘Politico’ in May 2015, the journalist apologized and admitted that he should have disclosed the donations to the network and its viewers.
Based on Stephanopoulos' donations and his behavior during the past presidential debates and interviews, the Republican Party leaders and contenders expressed their distrust. They also called for his ban from the 2016 presidential debates due to conflict of interest. Later, Stephanopoulos agreed to quit as a moderator from the February 2016 Republican Presidential primary debate.
Personal Life
In 2001, George Stephanopoulos got married to actress/writer Alexandra Wentworth at the Archdiocesan Cathedral of the Holy Trinity in New York. As of now, the couple has two daughters: Elliott Anastasia and Harper Andrea.
The American journalist was introduced to transcendental meditation by actor and comedian Jerry Seinfeld. He practices it regularly.
In 2007, Stephanopoulos received an Honorary Doctor of Laws from the St. John's University of New York City.
Legal Issues
In 1995, Stephanopoulos was arrested after he had a collision with a parked vehicle. He was charged with leaving the scene of an accident as well as with driving with an expired license. However, the charge of departing from the scene of an accident was later dropped.

See the events in life of George Stephanopoulos in Chronological Order 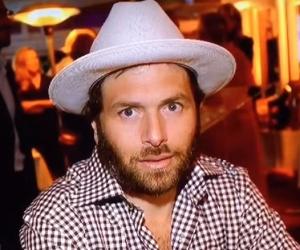