Advanced Search
Gabrielle Union is a popular American actress, activist and author who is noted for her roles in various films and television series. She began her career as a model and went on to obtain minor acting roles in some of the most popular sitcoms and teen-comedies of the 1990s. She made her breakthrough through her roles in the acclaimed medical drama series ‘City of Angels’ as well as the 2002 film ‘Bring It On’. Union received wide critical acclaim for her role in the film ‘Neo Ned’. She is also an author and entrepreneur, having her own clothing line as well as a range of cosmetics and watches. Her book ‘We’re Going To Need More Wine’ was judged the ‘Best Book by a Black Author’ for that year. She is an activist and advocate for survivors of assault. She has also campaigned for Atlanta Mayor Kasim Reed and President Barack Obama. American People
American Women
Nebraska Actresses
University Of California, Los Angeles
Scorpio Actresses
Childhood & Early Life
Gabrielle Monique Union was born on 29 October 1972 in Omaha, Nebraska, to Sylvester E. Union and Theresa Glass. Her father was a business executive and former military sergeant while her mother was a manager at a phone company. Her parents divorced after thirty years of marriage. She has two sisters, one older and one younger.
When she was just eight, her family moved to Pleasanton, California where she attended Foothill High School.
Union went to the University of Nebraska where she was a member of the varsity soccer team. She then transferred to Cuesta College before finally ending up in UCLA, where she earned herself a degree in sociology.
While studying at UCLA in her senior year, she interned at the Judith Fontaine Modeling & Talent Agency to earn extra academic credits. She was found to be so pretty that she eventually became a model at the agency.
At the age of 19 in 1992, Union was attacked and raped while working at her part-time job in a Payless Store. This terrifying experience had a profound effect on her life, making her a stronger and more resilient person. 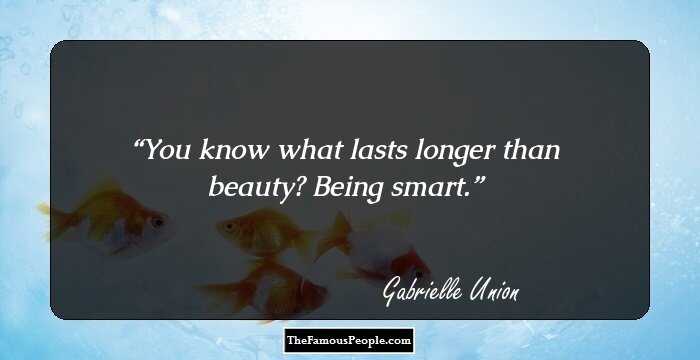 Continue Reading Below
Career
Gabrielle Union’s acting career began with minor roles in teen movies such as ‘10 Things I Hate About You’, ‘She’s All That’ and ‘Love & Basketball’.
In 1997, she appeared in an episode of ‘Star Trek: Deep Space Nine’ titled ‘Sons and Daughters’, as the Klingon character N’Garen. She also appeared in episodes of ‘Sister, Sister’, ‘Smart Guy’ and ‘7th Heaven’.
She obtained her first leading role in the 2003 film ‘Deliver Us from Eva’ in which she acted opposite rapper LL Cool J. She had previously worked with him in a music video for his song ‘Paradise’ in 2002. Union received critical acclaim for her role in the film.
She starred opposite Jamie Foxx in the 2004 movie ‘Breakin’ All the Rules’. The film was unsuccessful and did not perform well at the box office.
She became affiliated with cosmetic giant ‘Neutrogena’ in 2004 and has been their spokeswoman ever since.
In 2006, she starred in a music video for Busta Rhymes’ song ‘I Love My Chick’. She played his love interest in the video.
She appeared in the movie ‘Daddy’s Little Girls’ in which she played Julia Rossmore, a romantically challenged attorney. The director of the film Tyler Perry wrote the part especially for her. The film was released on Valentine’s Day in 2007.
She made an appearance in the Christmas film ‘The Perfect Holiday’. The film was released on 12 December 2007.
In 2008, she starred in the hit movie ‘Cadillac Records’ in which she played ‘Geneva Wade’, Muddy Waters’ wife.
Continue Reading Below
She launched a clothing line for plus women called ‘Love & Blessings’ in 2010. Gabrielle was inspired by her full-figured sister.
She also made appearances in the shows ‘Army Wives’ and ‘NTSF:SD: SUV’ throughout 2010 and 2011.
In March 2014, she released her first wine ‘Vanilla Puddin' and in November 2014, it was announced that she would be the brand ambassador for nail polish company ‘SensatioNail’, making her the company’s first celebrity ambassador and creative advisor.
She was featured as Esther, a rape victim in the movie ‘The Birth of a Nation’ in October 2016. She reportedly took on the role as she could relate to the character well, being a rape victim herself.
In 2017, she launched a range of hair products called ‘Flawless by Gabrielle Union’ and in September that year, she announced a collaborative partnership with ‘Invicta Watches’. 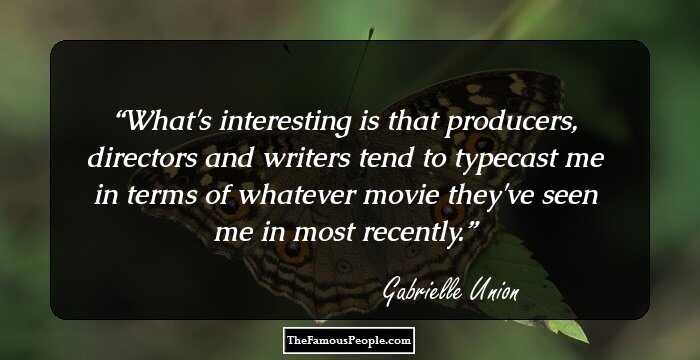 Major Works
In 2007, Gabrielle Union played the role of Isis in the cheerleading movie ‘Bring It On’. Appearing alongside Kirsten Dunst, her exceptional performance in the film pushed her into the limelight.
In 2003, she landed the part of Will Smith’s character’s girlfriend in the film ‘Bad Boys 2’. The film was a box office hit and raked in more than $273 million worldwide.
In 2005, she appeared alongside Jeremy Renner in ‘Neo Ned’. Union portrayed an African-American woman with delusions that she was Nazi dictator Adolf Hitler.
Union played a recurring character in the ABC series ‘FlashForward’. In 2010, she received a nomination for an ‘NAACP Image Award for Outstanding Supporting Actress in a Drama Series’ for her role in the series.
In April 2017, her first book ‘We’re Going to Need More Wine’ was published by Dey Street Books, an imprint of HarperCollins. In December 2017, the book was named ‘Best Book of the Year by a Black Author’ by ‘The Root’.
Personal Life & Legacy
Gabrielle Union dated NBA player, Jason Kidd, when she was in high school. Kidd broke up with her just two weeks before her junior prom.
She began dating NFL player Chris Howard after they met at a party in 1999. They were married on 5 May 2001. The couple, however, got divorced in October 2006.
In 2009, Gabrielle started dating NBA player Dwyane Wade. They split up for a while in early 2013 because of Wade’s demanding career but eventually got engaged in December 2013. They were married on 30 August 2014 in Miami, Florida. 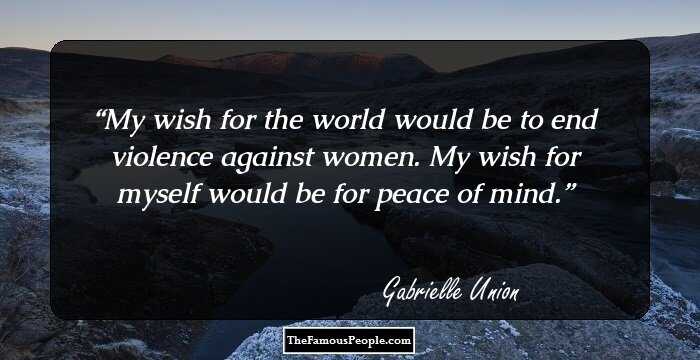 Trivia
Pop-star Beyonce is Union’s childhood friend. They also worked together in the 2008 film ‘Cadillac Records’.

Quotes By Gabrielle Union | Quote Of The Day | Top 100 Quotes

See the events in life of Gabrielle Union in Chronological Order