Fela Kuti was a Nigerian musician and composer who pioneered the Afrobeat genre (a unique combination of funk, psychedelic rock, jazz, and Yoruba chants). He also became known as a prolific civil rights activist and a political force in Nigeria and beyond, with especially outspoken views about both bureaucratic corruption and the after-effects of colonialism. Deeply influenced by the politics of the ‘Black Panther Party,’ Kuti’s music grew increasingly radical as he transitioned to pidgin English to increase his pan-African appeal. The Nigerian government he criticized did not react well to his catechisms and had the singer arrested over 200 times. The government also had his family and friends harassed repeatedly. Kuti believed in polygamy and was married to several women at the same time. He had eight children, three of them with his first wife. Kuti’s legacy has only grown stronger after his death, and he continues to be hailed as an African legend. Nigerian Celebrities
Black Activists
Black Musicians
Saxophone Players
Political Activists
Childhood & Early Life
Fela Kuti was born Olufela Olusegun Oludotun Ransome-Kuti (also known as Fela Anikulapo-Kuti, or simply Fela) on October 15, 1938, in Abeokuta, Nigeria. His mother, Funmilayo, was a feminist activist and an anti-colonialist who became the first woman to drive a car in Nigeria. His father, Israel Oludotun, was a minister in the Anglican church and the first president of the ‘Nigeria Union of Teachers.’ He had two brothers, Beko and Olikoye, both of whom later became well-known doctors, and a sister, Dolu. His cousin, Wole Soyinka, was a writer who became the first African to win the ‘Nobel Prize for Literature.’
After completing high school in Abeokuta, Kuti was briefly employed as a clerk at the ‘Federal Ministry of Commerce’ before being sent to London to study medicine. Once in London, he decided to switch to music, enrolling at the ‘Trinity College of Music.’
Continue Reading Below
You May Like

Who Is The Most Popular BTS Member?
Career
Kuti formed his first band, ‘Koola Lobitos,’ while in college. After moving back to Nigeria in 1963, he re-formed the band, trained as a radio producer, and worked with trumpeter Victor Olaiya.
He first came up with Afrobeat during a trip to Ghana in 1967. The trip was undertaken to help him think of a new musical direction.
In 1969, Kuti and his associates embarked on a 10-month trip of the US, where he met Sandra Izsadore, a ‘Black Panther’ activist who introduced him to the politics of Malcolm X and other ‘Black Power’ advocates. Kuti was fascinated, and later credited this experience as the catalyst for much of his activism. During this period, he also renamed his band ‘Nigeria ‘70.’ After running into trouble with the US immigration authorities, Kuti returned to Nigeria, where he again changed the band name to ‘Afrika ‘70.’
After this trip, the band began to focus more on socio-political issues, instead of exclusively romantic concerns. In 1974, Kuti built a fence around his house and created a sovereign commune, the ‘Kalakuta Republic.’ This location housed a recording studio.
Around the same time, he also set up a nightclub where he performed his music and conducted traditional Yoruba ceremonies, in his attempts to return to Nigeria’s roots.
In 1977, he, along with and ‘Afrika ‘70,’ released ‘Zombie,’ a politically charged piece that decried the methods of the Nigerian military. Although exceedingly popular with the public, this album invited swift and terrible backlash from the government, which sent 1000 soldiers to attack the ‘Kalakuta Republic,’ destroyed his property, injured Kuti, and threw his elderly mother from a window. His mother later succumbed to her injuries, prompting Kuti to deliver her coffin to a Nigerian general’s residence and composing two more songs criticizing the government.
In 1978, he performed at two notable concerts: one in Accra, which led to him being banned from Ghana, and the other in Berlin, after which most of his troupe left him due to concerns about financial recklessness. During this period, he also changed his middle name to Anikulapo (“He who carries death in his pouch”) and dropped the last name, ‘Ransome,’ which he believed was a slave name.
After his return from Europe, he moved to Ikeja and set up a new club, which became a hotbed for drug activities. The anti-Fela sentiment within the government reached a new peak at this time, prompting him to establish his own political party, ‘Movement of the People’ (MOP), and run for president. His candidature was rejected, and the military overthrew the civilian government and resumed its harassment of the musician.
He then created a new band named ‘Egypt ‘80,’ claiming Egyptian achievements for Africa.
Continue Reading Below
In 1984, he was charged with currency smuggling, arrested, and jailed for 20 months, before being released as a result of a new coup. This entire operation was politically motivated. A few months later, he was arrested for the kidnap of a young woman who lived on his premises. He was eventually acquitted. He was also accused of murder after a death in his club.
He continued to make music through the 1980s, performing in a notable ‘Amnesty International’ concert in New Jersey and releasing ‘Beasts of No Nation’ just before the abolition of apartheid in South Africa.
His health began failing in the early 1990s. After being arrested in 1993 again, for murder, with three of his ‘Afrika ‘70’ bandmates, Kuti slowed down and began producing less music, leaving his son, Femi to continue his legacy.
Major Works
His album ‘Zombie’ (1977) remains a classic, all the more powerful for the disproportionate state response it solicited.
The singles ‘Coffin for Head of State’ and ‘Unknown Soldier’ were written in response to his mother’s death at the hands of the military.
He attacked the ‘ITT Corporation’ and the military again with his iconic single ‘I.T.T. (International Thief Thief).’
The 1989 album ‘Beasts of No Nation’ was a response to remarks by the erstwhile South African president and has now become a pan-African political landmark.
Personal Life & Legacy
Kuti met his first wife, Remilekun Taylor, in London. They married in 1961, when he was 23, and had three children: Yeni, Femi, and Sola, born in 1961, 1962 and 1963, respectively. The first two children were born in England, while Sola was born in Lagos, Nigeria. Femi was introduced on stage during one of his father’s European tours and has now become a musical legend in his own right. Kuti had at least five other children, one of whom, Seun Kuti, is also a well-known musician.
He was a proponent of polygamy, marrying 27 women at the same time in 1978. Although he later switched to a rotation system of keeping 12 wives simultaneously, he finally came to believe that marriage was an “imposition” and divorced all his wives. His attitude toward women (in his music and personal life) has been subjected to much scrutiny with allegations of misogyny leveled against him.
He died of AIDS complications in Lagos, on August 2, 1997. His funeral prompted three days of processions and a public service.
Trivia
Kuti’s performances were especially notable for their wildness: he gyrated frequently over the keyboard, wearing nothing but bikini briefs.
After falling out with his saxophonist, he vowed to teach himself to play the instrument in 24 hours, and after 17 hours of practice, appeared on stage to perform a number of saxophone solos proficiently.
Recommended Lists:
Singers #1013
Activists #114
You May Like

See the events in life of Fela Kuti in Chronological Order 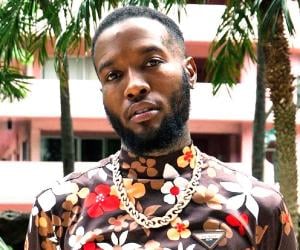