(Italian Filmmaker Known for His Distinctive Style, Which Blends Fantasy and Baroque Images with Earthiness.)

Federico Fellini is one of the greatest and most influential filmmakers of the last century. Over a career of more than fifty years, he won five Academy Awards. He won the most Oscars in history for Best Foreign Language Film. Starting work as an assistant scriptwriter, he gained access to the inner workings of how films are created and edited. Films such as Roma città aperta and Paisà were nominated for their screen plays. Soon, he progressed to directing films and created master pieces such as Nights of Cabiria, 8½, Juliet of the Spirits, La Strada, La Dolce Vita and Amarcord. His films offer a combination of themes including memory, dreams, fantasy and desire giving rise to the term "Felliniesque" used when depicting an ordinary scene that has been altered by the addition of hallucinatory imagery. Italian Celebrities
Screenwriters
Italian Men
Italian Directors
Italian Film & Theater Personalities
Childhood & Early Life
Fellini was born on January 20, 1920 in Rimini, then a small town on the Adriatic Sea, on January 20, 1920, to Urbano Fellini and Ida Barbiani. He had two younger siblings: Riccardo, a documentary director for RAI Television, and Maria Maddalena.
In 1926, he began attending the Carlo Tonni public school. He spent his leisure time drawing, staging puppet shows, and loved the American cartoons in the corriere dei piccoli, the popular children’s magazine.
In 1926, he was introduced to the world of Grand Guignol, the circus with Pierino the Clown, and Guido Brignone’s ‘Maciste all’Inferno’ became the first film he saw.
In 1939, he enrolled at the University of Rome law school on his parents’ insistence but never attended classes. Instead, he spent time with his newly made lifelong friend, painter Rinaldo Geleng. 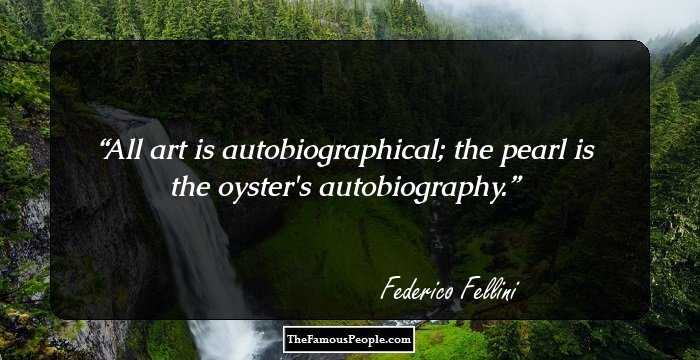 Quotes: Art
Continue Reading Below
Career
He soon joined the editorial board of Marc’Aurelio, the biweekly humor magazine, and wrote a regular column which gave him steady employment between 1939 and 1942, and enabled interactions with scriptwriters.
The famous actor Fabrizi recruited Fellini to continue supplying stories and ideas for his performances. Between 1939 and 1944, they worked on a number of largely forgotten comedies, including No Me Lo Dire.
Roma città aperta or Rome, Open City, a 1945 Italian war drama film, was directed by Roberto Rossellini. The screen play was co-written by Sergio Amidei and Fellini for which they received Oscar nominations.
Between 1946 and 1948, he worked as screenwriter and assistant director on Rossellini’s Paisà (Paisan), co-wrote Alberto Lattuada’ Senza and Il mulino del Po, and worked with Rossellini on the anthology film L'Amore.
In 1950, he co-produced and co-directed with Lattuada, Variety Lights, but its poor performance left the production company bankrupt. The White Sheik, the following year, his first solo-directed feature, was trashed by critics.
I Vitelloni, a 1953 comedy, restored his reputation as a director. He co-wrote the screenplay with Ennio Flaiano, and Tullio Pinelli. It received a Venice Film Festival Silver Lion and an Oscar nomination.
He directed and wrote the story for Nights of Cabiria, in 1957. Hailed as a cinematic masterpiece, the film is about a waifish prostitute who wanders Rome’ streets searching for true love.
With, 8½, his writer's block became the subject of perhaps his greatest film, in1963. The story is of a filmmaker (Mastroianni) attempting to mount a movie which remains unmade.
He directed, and co-wrote the story and screen-play for, Juliet of the Spirits, a 1965 fantasy comedy-drama film about a middle-aged woman’s memories and mysticism that gives her strength to leave her philandering husband.
Continue Reading Below
In 1982, a major exhibition of his 63 drawings was held in Paris, Brussels, and New York. His sketches were inspired by his own dreams and stimulated drawings for characters, costumes and set designs.
In 1989, he directed ‘The Voice of the Moon’, which is about a fake inspector of wells and a former prefect who wander through the countryside and discovers a dystopia of television commercials, fascism and Catholicism.
Between 1991 and 1992, he collaborated with Canadian filmmaker Damian Pettigrew and recorded detailed conversation on films that became the basis of their feature documentary, Fellini: I'm a Born Liar, and a book. 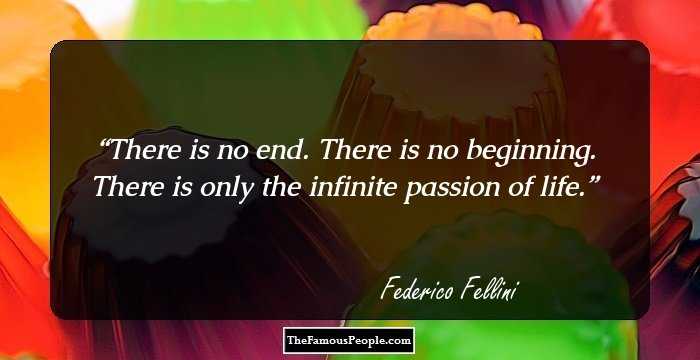 Quotes: Life
Major Works
Fellini’s La Strada (The Road), released in 1954, was described by a critic as “an unfinished poem,” and won fifty international awards. He co-wrote the screenplay with Pinelli and Flaiano.
La Dolce Vita, a 1960 comedy-drama film by him, follows Marcello Rubini, on his fruitless search for love and happiness. It was voted 6th greatest film of all time by Entertainment Weekly.
Amarcord, a 1973 comedy-drama film directed by him, is a semi-autobiographical tale about an adolescent boy growing up among eccentric characters in an Italian village. A critic described Fellini as "an artist at his peak”.
Awards
Fellini received four Academy Award in the Best Foreign Language Film categories for La Strada, Nights of Cabiria, 8½, and Amarcord, and was nominated many times for Best Screen Play and Best Direction.
He shone at film festivals wining the Silver Lion for I Vitelloni and La Strada at the Venice Festival, a Palme d'Or for La Dolce Vita at Cannes and 8½, in Moscow and Berlin.
He was made the Grande Ufficiale OMRI, the Gran Croce OMRI and finally the Cavaliere di Gran Croce OMRI, progressively the highest ranks in the Order of Merit of the Italian Republic
He was honored with Lifetime Achievement Awards at the Cannes and Venice Film Festivals, European Film Awards for Lifetime Achievement, Japan Art Association's Praemium Imperiale and 1993 the Oscar for Lifetime Achievement 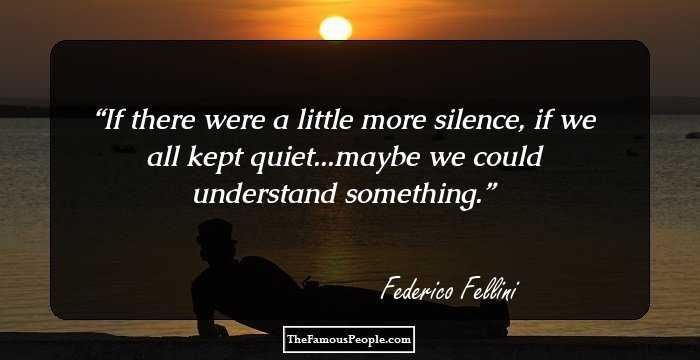 Personal Life & Legacy
Fellini married Giulietta Masina in 1943, an Italian film and stage actress. Their son Pierfederico tragically lived for only one month and died of encephalitis in 1944. Masina and Fellini did not have another child. The couple remained together till his death in 1993.
Fellini, Masina and their son Pierfederico are buried in a bronze sepulchre sculpted by Arnaldo Pomodoro. Designed as a ship's prow, the tomb is located at the main entrance to the Cemetery of Rimini.
Trivia
This Italian film director’s recipe for a good film -"A good opening and a good ending make for a good film provided they come close together”.
Declared the 10th greatest director of all time by Entertainment Weekly, the term "paparazzi" comes from a character named Paparazzo in his one of his films, who is a journalist photographing celebrities.

Quotes By Federico Fellini | Quote Of The Day | Top 100 Quotes

See the events in life of Federico Fellini in Chronological Order