Erykah Badu is a noted singer-songwriter, record producer, disc jockey, activist, and actress of African-American descent. Brought up in artistic environment by her actress mother, she developed a love for singing and acting at a very early age. Although she entered Grambling State University to study theatre, she soon changed her mind and returned home without acquiring a degree to concentrate on music. Shortly, she formed a hip-hop duo with her cousin Robert Free Bradford, travelling around and cutting a nineteen-song demo. Very soon, she attracted the attention of Kedar Massenburg, eventually signing a contract with his company, Kedar Entertainment. Her first album, ‘Baduizm’, was a big hit, establishing her as a popular star by the age of twenty-five. Since then, she has produced eight more albums. Among her eight albums, one is a live performance, the other is ‘ICON: The Best of Erykah Badu,’ a compilation of her hit songs, and one mixtape. For her songs, she has received numerous awards and nominations, making her one of the icons of her time. Zendaya Maree S...
26th February In History
DID WE MISS SOMEONE?
CLICK HERE AND TELL US
WE'LL MAKE SURE
THEY'RE HERE A.S.A.P
Quick Facts

Erykah Badu was born as Erica Abi Wright on February 26, 1971, in Dallas, USA. Her father, William Wright Jr, lived away from the family most of the time. He spent considerable period in jail, nobody knew for what. In 1975, he vanished altogether only to return twenty years later.

Her mother, Kolleen Gipson-Wright, a much respected actress in the local theatre, raised her children almost single-handedly. In this, she was helped by her own mother, Thelma Gipson, and her mother-in-law, Viola Wright. Erykah spent a lot of time with these ladies while her mother was busy on the stage.

Erykah was born elder of her parents’ two daughters. She has a younger sister named Koryan (Nayrok), born in 1974. Later in 1983, her mother gave birth to another child, a son named Eevin.

Although they were comparatively poor Erica never realized that because everything was neat and clean. Despite the absence of her father, she had a very happy childhood, surrounded by uncles, aunts, grandmothers and cousins, especially Robert Bradford. On top of everything else was her mother, a pillar of strength.
Her mother used to tell her “… what matters is on the inside… not what you look like”, also teaching her to lead a disciplined and active life. She also imbibed in her daughters a love for music, playing the songs of Chaka Khan, Marvin Gaye and Stevie Wonder to them.

Erica inherited her mother’s artistic traits and a desire to perform. She would often sing in front of the mirror pretending that she was a background singer for Chaka Khan. She would also make her grandmother sit up and watch her while she sang, danced and acted.

In 1975, Erykah Badu first appeared on stage, performing with her mother at Dallas Theatre Centre and by seven, she started learning to play the piano. Her favorite song was ‘The Greatest Love of All’.

She began her formal education at a grade school, where her talent was quickly recognized. In her First Grade, she appeared in ‘Annie’, skipping and singing the song ‘Somebody Snitched On Me.’ During the summer vacations, she sang at the choir of the First Baptist Church, honing her choral skills.

Along with acting and singing, little Erykah Badu also began to expand her cultural horizon, attending different festivals, especially Harambee Festival in South Dallas, slowly developing an interest in African culture and dress. The tall headgear she would wear one day originated from these visits.

In 1980, she was enrolled in a dancing troupe called Mahogany, learning to dance first under Dr Van Gilbert. Later she also learned formal ballet with Etta Piper Jamison Company. By 1982, she had also started rapping and hip-hopping.

When it was time to attend high school, she chose Dallas' Booker T. Washington High School, an arts-oriented magnet school. While studying there she rejected what she considered to be a slave name, changing the spelling of Erica to Erykah and replacing Wright with Badu, possibly in 1984.
After graduating from high school, she enrolled at the Grambling State University, a historically black institution in Grambling, Louisiana, studying theatre until 1993. Thereafter, she returned Dallas without completing her course, mainly to concentrate on music. . 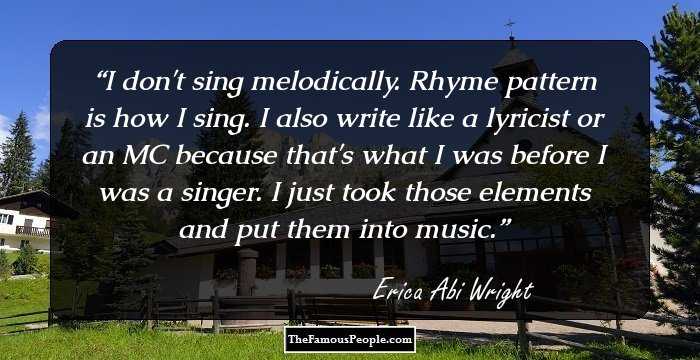 Her big chance came when in 1994, Erykah opened a show for D’Angelo. Through him, she caught the attention of Kedar Massenburg, an American record producer and founder of Kedar Entertainment. Impressed, he set her up to record a duet, ‘Your Precious Love' with D'Angelo.

In 1995, she signed a contract with Kedar Entertainment and moved to Brooklyn. In January 1996, she made her debut with ‘On & On’, which remained at the number-one position on the U.S. Billboard Hot R&B/Hip-Hop Songs for two weeks, subsequently reaching the same position on UK Singles Chart.
In 1996, Erykah also recorded her debut album, ‘Baduizm’. Released on February 11, 1997 by Kedar Records, it received universal acclaim from critics, who not only praised the musical style of the album, but also her ‘artistic vision’, establishing her position as the torchbearer of soul music.
Her next album, ‘Live’ was a live album released on November 18, 1997, barely a month after the release of its lead single, ‘Tyrone’. It was also huge hit and reached number four on the US Billboard 200 and number one on the US Billboard Top R&B/Hip-Hop Albums.

While ‘Live’ was being recorded Badu was pregnant with her first child. After its release, she took some time off to raise her child, returning in 1999, to collaborate with The Roots, a distinguished hip-hop group. She created the song ‘You Got Me’ and became a member of Soulquarians.

In 1999, she also began working on her second studio album, ‘Mama’s Gun’, a neo soul number containing confessional lyrics she herself wrote. This was also the year when she debuted in films, appearing in ‘The Cider House Rules’ as Rose Rose
Released on November 21, 2000, by Motown Records, ‘Mama’s Gun’, incorporated funk, soul, and jazz styles. Although it received positive reviews it was not as successful as Baduizm’. However, one of its number, ‘Bag Lady’, released separately on September 12, 2000, reached number-one position on the R&B chart.
Continue Reading Below
In 2001, she went on a long musical tour to promote her album, ‘Mama’s Gun’. Called ‘Mama's Gun World Tour’, it started at Allen Theatre in Cleveland Ohio on February 10 and ended on September 3.
In 2002, while writing for her next album, ‘Worldwide Underground’, she experienced a writer’s block. Hoping to find inspiration, she went on, what she called ‘Frustrated Artist Tour’. Lasting from January 3 to February 22, it saw her performing in small clubs and theatres.
In 2003, Erykah Badu collaborated with Common (Lonnie Rashid Lynn, Jr.) to produce ‘Love of My Life (An Ode to Hip-Hop)’, a single. It occupied the number one position on the Hot R&B/Hip-Hop Singles & Tracks chart for four weeks and also reached number 9 position on the Billboard Hot 100 chart.
Her third studio album, ‘Worldwide Underground’, was released on September 16, 2003. Within first week, it sold 143,561 copies and by October 28 more than 500,000 copies of the album were sold. To further promote the album, Badu now decided to go on her next tour.
The ‘Worldwide Underground Tour’ kicked off on February 3, 2000 in New Orleans. In the same year, she performed in ‘Dave Chappelle's Block Party’, a documentary film directed by Michel Gondry and released in 2005.

In 2005, she launched her own music label, ‘Control FreaQ Records’ so that artists could enjoy creative freedom. In the same year, she co-founded Sugar Water Festival, a musical festival that also aims to make African-American women aware of health issues.

On February 26, 2008, Erykah Badu had her fourth studio album, ‘New Amerykah Part One’ released. However, “Honey”, the album’s lead single, was released on December 11, 2007. She had composed most of these songs in 2005, after receiving a computer as a Christmas gift in 2004.

In 2008, she also went on her ‘Vortex Tour’, starting it on May 4 from Detroit. The US leg of the tour ended on June 15. Reaching Denmark on June 25, she returned to the USA for a few more shows before continuing her tour across Europe until October 24.
On March 30, 2010, she released her fifth studio album, ‘New Amerykah Part Two (Return of the Ankh)’. Although many of the songs were written earlier, it had softer tone than her earlier albums. Thereafter, she took a five year break.
Continue Reading Below
In May 2013, she announced that she was working on a new album. By July 2014, she completed recording a few songs in Africa, “laying down drum track”, eventually releasing her sixth studio album, ‘But You Caint Use My Phone’, on November 27, 2015.
Badu’s last film, ‘The Land’, in which she appeared as Turquoise was released in 2016. Concurrently, she also appeared in fashion shows, making her debut in the New York Fashion Week in the same year. Earlier in 2008, she became the face of Tom Ford’s White Patchouli fragrance. 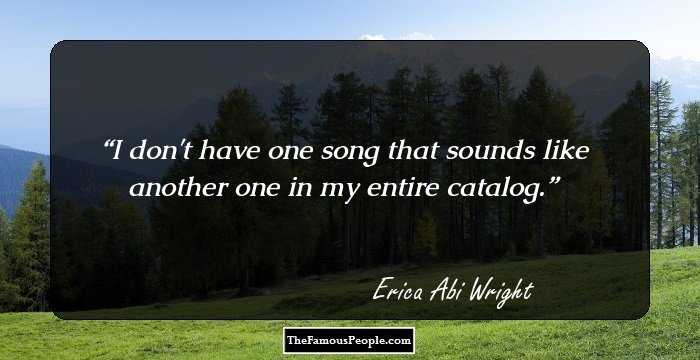 Erykah Badu is best known for her debut album, ‘Baduizm’, which contains popular numbers like ‘On & On’, ‘Next Lifetime’, ‘Other side of the Game’, and ‘Apple Tree’. She co-wrote most of the songs. Recorded throughout 1996, the album was released in early 1997, and instantly established her as a popular singer and songwriter.

Erykah Badu is a single mother with three children. In 1995, she partnered with André 3000 of OutKast, and had her first child, Seven Sirius Benjamin (born in 1997), with him. The relationship ended sometime in 1999.

In 2000, she started another relationship with the fellow Soulquarian, Lonnie Rashid Lynn, Jr. (stage name Common). It ended in 2002. Thereafter, she started dating West Coast rapper Tracy Lynn Curry (stage name The D.O.C) and gave birth to their daughter, Puma Sabti Curry, in 2004.

In 2009, she gave birth to her third child, a daughter named Mars Merkaba Thedford, fathered by Timothy Elpadaro Thedford (stage name Jay Electronica). They remained together for five years before going on their separate ways.

Quotes By Erykah Badu | Quote Of The Day | Top 100 Quotes

See the events in life of Erykah Badu in Chronological Order