(British Actress, Screenwriter and the Only Person to Win Academy Awards for Both Acting & Writing)

Born into a family of actors and actresses, actress-writer Emma Thompson rose to international fame after starting her career in London’s stage production. The ‘West End’ revival of the musical, ‘Me and My Girl’ catapulted her to great fame. She impressed both the critics and the audiences alike with her films, such as ‘Henry V,’ and ‘Dead Again.’ Throughout the early stages of her career, she worked extensively with her then-husband Kenneth Branagh and her ‘Footlights’ co-stars Hugh Laurie and Stephen Fry. Two of her best films, ‘Howards End’ and ‘The Remains of the Day,’ earned her appreciation from across the globe. She established herself as a brilliant artist by delivering good performances in films like ‘In the Name of the Father’ and ‘Sense and Sensibility,’ in which she also worked as a screenwriter. She gave sterling performances on television as well as in productions like ‘Wit’ and the miniseries, ‘Angels in America.’ Exceptionally competent, Thompson took on recurring roles in a series of ‘Harry Potter’ films, such as ‘Harry Potter and the Prisoner of Azkaban,’ ‘Harry Potter and the Order of the Phoenix,’ and ‘Harry Potter and the Deathly Hallows – Part 2.’ This tremendously talented star continues to write and act and has become one of the most honored and respected actresses. Florence Pugh
15th April In History
DID WE MISS SOMEONE?
CLICK HERE AND TELL US
WE'LL MAKE SURE
THEY'RE HERE A.S.A.P
Quick Facts 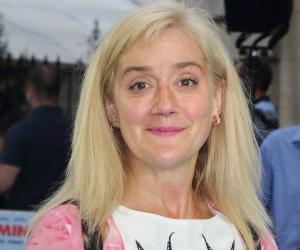 British People
Screenwriters
British Women
Aries Actresses
British Actresses
Childhood & Early Life
Thompson was born on 15 April 1959, in Paddington, London, England, to Phyllida Law, a Scottish actress, and Eric Thompson, a popular actor of ‘The Magic Roundabout’ fame.
Thompson attended the ‘Camden School for Girls’ and in 1977, she was enrolled at the ‘Newnham College’ in Cambridge. After reading ‘The Madwoman in the Attic,’ she wanted to be a comedienne like Lily Tomlin.
In 1980, she became the vice president of ‘Footlights,’ a sketch comedy troupe, and co-directed the troupe's first all-female revue, ‘Women's Hour.’ Her team was awarded the ‘Perrier Award’ for ‘The Cellar Tapes.’ 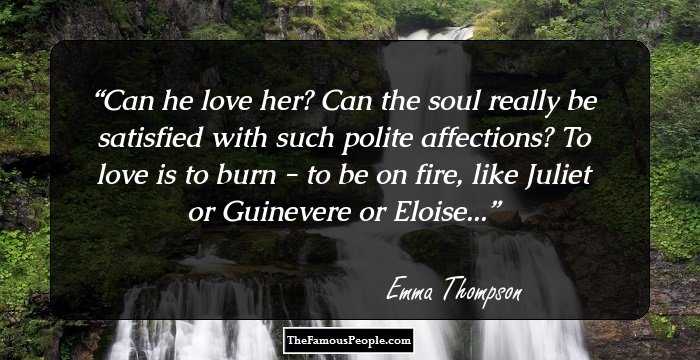 Quotes: Love, Like, Soul
Continue Reading Below
Career
After a minor role in the 1982 play ‘Not the Nine O’clock News,’ Thompson worked for television with Hugh Laurie and Stephen Fry in ‘There's Nothing To Worry About!’ and the sketch show ‘Alfresco.’
She started hogging the limelight in 1985 when she appeared in West End’s revival of the musical, ‘Me and My Girl.’ Two years later, she played lead roles in two television miniseries, ‘Fortunes of War’ and ‘Tutti Frutti.’
She made her film debut with the 1989 romantic comedy ‘The Tall Guy’ which turned out to be a box-office disappointment. Starring Jeff Goldblum, she played a nurse with whom the character played by Goldblum falls in love.
She portrayed Princess Katherine in Branagh's screen adaptation of Shakespeare’s ‘Henry V’ in 1989. The following year, she acted alongside Branagh in his stage productions of ‘A Midsummer Night's Dream’ and ‘King Lear.’
She received great critical acclaim for her supporting role as Duchess D'Antan in the 1991 film ‘Impromptu,’ which depicted the life of novelist George Sand. She was cast alongside Judy Davis and Hugh Grant in the film.
In association with Branagh, she worked in ‘Dead Again,’ a psychological thriller, in which she played a woman who forgets her identity. The thriller was number one at the US box office for two weeks.
In 1992, she worked with Stephen Fry, Hugh Laurie, Imelda Staunton, and Tony Slattery in ‘Peter’s Friends.’ Directed by Branagh, it was about a group of Cambridge alumni who reunite ten years after graduation.
In the 1993 romantic comedy film ‘Much Ado About Nothing,’ which was based on William Shakespeare's play, she played Beatrice and impressed the critics with her performance. Kenneth Branagh, who directed the film, also starred in it.
In the Merchant–Ivory 1993 film ‘The Remains of the Day,’ which was based on Kazuo Ishiguro's novel, she starred as Miss Kenton, a housekeeper. In the film, Anthony Hopkins played Steven, a butler in interwar Britain.
Continue Reading Below
Her sterling performance as lawyer Gareth Pierce in the 1993 film ‘In the Name of the Father,’ starring Daniel Day-Lewis, earned her a second ‘Oscar’ nomination of the year.
In the 2001 HBO film ‘Wit,’ she portrayed a Harvard professor’s struggles after being diagnosed with cervical cancer. Her performance in the film earned her nominations for ‘Golden Globe,’ ‘Emmy,’ and ‘Screen Actors Guild Award.’
One of her most commercially successful films was Richard Curtis's romantic comedy ‘Love Actually,’ which released in 2003. In the film, she portrayed a middle-class wife who suspects her husband, played by Alan Rickman.
She portrayed Sybil Trelawney in ‘Harry Potter and the Prisoner of Azkaban.’ She went on to reprise the role in ‘Harry Potter and the Order of the Phoenix’ and ‘Harry Potter and the Deathly Hallows – Part 2.’
She appeared in the ‘HBO’ miniseries ‘Angels in America’ and also voiced Queen Elinor in ‘Brave.’ In 2013, her performance in ‘Saving Mr. Banks’ earned her great critical acclaim.
In 2014, she played Lady Eastlake in the biographical film ‘Effie Gray’ which was written by her. The film is based on art critic John Ruskin's affair with Effie Gray.
In 2015, she was seen in the film ‘A Walk in the Woods’ which was adapted from a book by Bill Bryson.
Thompson appeared as Mrs. Potts in Disney's live-action adaptation of ‘Beauty and the Beast’ in 2017. In the same year, she played Queen Elizabeth I in the ‘BBC’ sitcom ‘Upstart Crow.’
In 2019, she reprised her role as Agent O in ‘Men in Black: International.’
Continue Reading Below 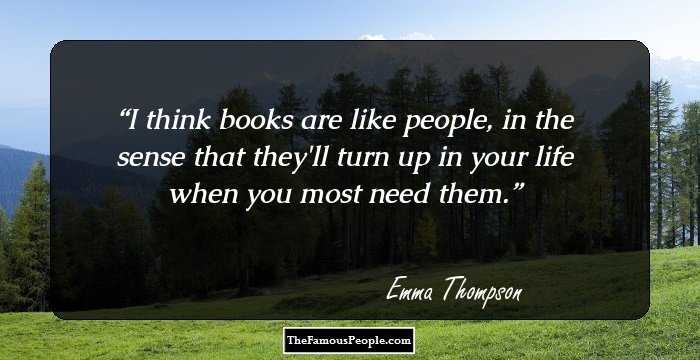 Quotes: You, Life, Think, Like, Need, Books, I
Major Works
Thompson was cast alongside Anthony Hopkins and Vanessa Redgrave in the 1992 Merchant Ivory film, ‘Howards End,’ which was based on E. M. Forster’s novel. The film received massive critical acclaim and won her many accolades.
She wrote the screenplay of the 1995 Ang Lee-directed film ‘Sense and Sensibility.’ She also appeared in the film alongside Kate Winslet. One of the highest-grossing films of her career, ‘Sense and Sensibility’ amassed $134,993,774 at the box-office.
Thompson wrote ‘The Further Tale of Peter Rabbit’ in 2012. Written as an addition to the ‘Peter Rabbit’ series, the book was published to commemorate the 110th anniversary of the release of ‘The Tale of Peter Rabbit’ by Beatrix Potter. Thompson’s book eventually became ‘New York Times’ Best Seller.
Thompson wrote her second book titled ‘The Christmas Tale of Peter Rabbit’ in 2013.
Awards & Achievements
Emma Thompson won an ‘Oscar’ in 1993 for ‘Best Actress in a Leading Role’ for the film ‘Howards End.’
Thompson won another ‘Oscar’ for ‘Best Writing, Screenplay Based on Material Previously Produced or Published’ for the film ‘Sense and Sensibility’ in 1996.
She has won ‘BAFTA’ awards under the categories, ‘Best Actress’ and ‘Best Performance by an Actress in a Leading Role’ for ‘Tutti Frutti,’ ‘Fortunes of War,’ ‘Howards End,’ and ‘Sense and Sensibility.’
She won a ‘Primetime Emmy’ under the category ‘Outstanding Guest Actress in a Comedy Series’ for ‘Ellen’ in 1998. She won the award for appearing in an episode titled ‘Emma.’ 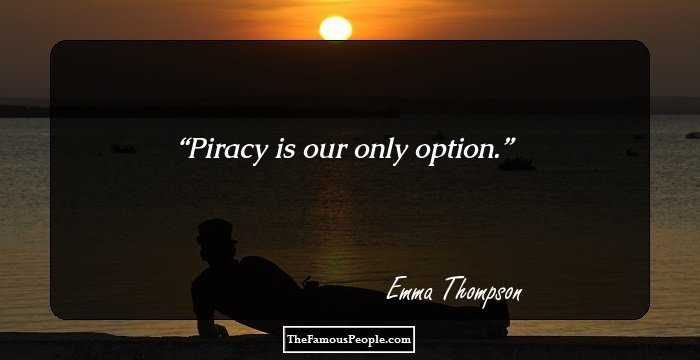 Personal Life & Legacy
Thompson married actor-director Kenneth Branagh in 1989. However, the couple got separated in 1995.
She married actor Greg Wise in 2003 and had a daughter named Gaia through IVF treatment. She also adopted a Rwandan orphan named Tindyebwa.
A supporter of ‘Greenpeace,’ she purchased a land near the village of Sipson with three others in 2009, to obstruct a proposed third runway for ‘Heathrow Airport.’
She actively participates in human rights work and is an ambassador for a charity called ‘ActionAid.’
Trivia
This British actress used to keep her ‘Oscar’ statuettes in her bathroom, but had to move them to make room for her daughter’s artwork.
This Oscar-winning actress has a song dedicated to her in the famous French singer Georges Moustaki's album, ‘Moustaki.’

Quotes By Emma Thompson | Quote Of The Day | Top 100 Quotes

See the events in life of Emma Thompson in Chronological Order