Elizabeth Banks, who started her career as a television actor, became popular through her Broadway appearances in ‘The 40-Year-Old Virgin,’ ‘Invincible,’ ‘Spiderman,’ and ‘The Hunger Games.’ She attracted male fans with her performance in ‘The Slither,’ a comic horror film. During her childhood, she was tomboyish who loved riding horses. Her primary aim was to become an athlete, but when she fractured her leg in a softball match, she concentrated on becoming an actor and worked towards achieving her goal. She is a versatile actor who has proved her mettle in different genres, such as drama, comedy, horror, and science fiction. Her prolific acting has won her ‘Emmy Awards’ and other honors. Along with her husband Max Handelman, a sportswriter, she runs a production company named ‘Brownstone.’ As a social worker, she is actively involved in the ‘Go Red for Women’ campaign. For one of its awareness campaigns on heart disease, she acted in the documentary ‘Just a Little Heart Attack.’ She is in favor of ‘Planned Parenthood,’ and extended her support to Barack Obama who insisted on federal funding for the same. 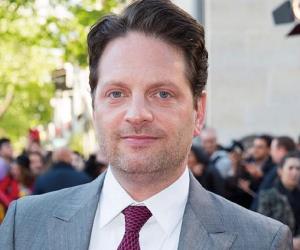 American People
T V & Movie Producers
American Women
Massachusetts Actresses
University Of Pennsylvania
Childhood & Early Life
Elizabeth Banks was born Elizabeth Irene Mitchell on February 10, 1974, in Pittsfield, Massachusetts, USA, to Mark Mitchell and Ann Mitchell. Her father Mark worked in ‘General Electric’ and her mother was a bank employee.
She was educated at ‘Pittsfield High School’ and during her school days, she participated in all kinds of sport. She switched her interest to acting when her leg was fractured in a softball game.
She started acting in her school plays and was excited about her new interest. After graduating from school in 1992, she enrolled at the ‘University of Pennsylvania.’ In 1996, she graduated with a major in communications.
She underwent training in drama at the ‘American Conservatory Theater.’ She was acclaimed as a great stage performer in productions like ‘A Midsummer Night's Dream’ and ‘Hurly Burly.’ She earned her MFA degree in 1998.
Continue Reading Below
Career
She moved to New York in pursuit of an acting career and got minor roles in TV and films. In 1998, she made her debut appearance in ‘Surrender Dorothy,’ a movie on drug addiction.
Her performance in ‘Surrender Dorothy’ gave way to more opportunities in television. She acted in Gotham-based TV productions like ‘Third Watch’ and ‘Sex and the City.’
She moved to Los Angeles in search of more opportunities in films. As there was another actor by the name Elizabeth Mitchell, she changed her surname to ‘Banks’ to avoid confusion.
She received her big breakthrough in 2002 when she appeared in Sam Raimi’s ‘Spiderman.’ Her role as ‘Betty Brant,’ a secretary to a newspaper tycoon, was written to suit her skills.
Her career graph kept moving northwards with roles in movies like ‘Swept Away’ and ‘Catch Me If You Can.’ Her role in ‘Catch Me If You Can’ gained her popularity.
Her performance as ‘Marcela Howard,’ the young wife of the owner of a racehorse in a film titled ‘Seabiscuit’ (2003) got her nominated for ‘Screen Actors Guild Award.’
In 2004, she reprised her role as ‘Betty Brant’ in ‘Spider-Man 2.’ The next year, she was at her best in the comic buster ‘The 40-Year-Old Virgin.’
In 2006, she got her first major role in ‘Slither,’ a comic horror film. In the film, she proved her versatility as an actor while playing the role of ‘Starla Grant,’ the wife of a man possessed by an alien.
In 2008, she was cast to play prominent roles in films like ‘Definitely, Maybe,’ ‘Meet Dave,’ ‘Zack and Miri Make a Porno,’ and ‘Lovely, Still.’ She landed a major role as the ‘First Lady Laura Bush’ in ‘W.’ Directed by Oliver Stone the film was based on the life of George W. Bush.
Continue Reading Below
In 2010, she made an appearance in the fourth season of the television sitcom ‘30 Rock.’ Her role as ‘Avery Jessup,’ the conservative television commentator, won her two nominations in the next two years.
In 2012, she landed important roles in films like ‘Man on a Ledge,’ ‘What to Expect When You're Expecting,’ and ‘The Hunger Games.’ Her supporting role in ‘The Huger Games’ gained her popularity.
She earned worldwide popularity for her role as ‘Effie Trinket’ in ‘The Hunger Games.’ She also reprised her role in its sequel ‘The Hunger Games: Catching Fire’ which released in 2013.
She co-owns a production company named ‘Brownstone’ along with her husband Max Handelman, a sportswriter and producer. The couple has produced films like ‘Surrogates’ and ‘Pitch Perfect’ through their company.
From 2014 to 2019, she did many movies like ‘Walk of Shame,’ ‘The Hunger Games: Mockingjay – Part 1,’ ‘Pitch Perfect 2,’ ‘The Hunger Games: Mockingjay – Part 2,’ ‘Pitch Perfect 3,’ ‘The Happytime Murders,’ and ‘Brightburn.’ Meanwhile, in 2018, she started directing the action comedy movie ‘Charlie’s Angels.’
Major Works
Her classic comic performance in ‘Seabiscuit’ earned her the ‘Screen Actors Guild Award’ for ‘Outstanding Performance.’ The film was considered a box office hit and received eight nominations at the 76th ‘Academy Awards.’
Her supporting role in ‘The Huger Games’ is considered one of her best works. The film earned more than $690 million worldwide and Banks was cast in its 2013 sequel ‘Catching Fire.’
Awards & Achievements
She became a prominent Hollywood actor with her performances in films like ‘Spider-Man,’ ‘Swept Away,’ and ‘Seabiscuit.’ Thanks to her stupendous performances, she won the ‘Exciting New Face Award’ from the ‘Young Hollywood Awards Team’ in 2003.
She acted in the fourth episode of the television sitcom series ‘30 Rock.’ Her remarkable performance earned her two ‘Emmy’ nominations for ‘Outstanding Guest Actress in a Comedy Series.’
Personal Life & Legacy
She met Max Handelman on the first day of her college at the ‘University of Pennsylvania.’ They started dating and got married in 2003.
Her husband is a renowned sportswriter and producer. He is also a partner of her production company ‘Brownstone.’ The couple has produced films like ‘Surrogates’ and ‘Pitch Perfect.’
The couple has two sons, Felix and Magnus Mitchell, both born through surrogacy. Though she was raised in accordance with the Catholic and Protestant faith, she converted to Judaism when she married Max Handelman.
Trivia
This American actor was a member of ‘Delta Delta Delta,’ also known as ‘Tri Delta,’ an international sorority, while studying at the ‘University of Pennsylvania.’ She was the first college graduate from her family.
She was nominated for ‘Emmy Award’ for her role in ‘30 Rock.’ She declined to act in ‘The Crazies’ as she felt that the role was similar to the one she had played in ‘Slither.’

See the events in life of Elizabeth Banks in Chronological Order