Edward Hopper was an American painter who earned recognition with his oil paintings. He had an affinity to painting from his early childhood and even though he was born to a middle-class family, his parents sought to enhance his talent. He learnt to paint under the tutelage of renowned painter Robert Henri at New York School of Art. There he learnt to portray commonplace themes onto the canvas which he later perfected to establish his unique style of painting. He even made some etchings which got recognized but to earn recognition as a painter, he had to struggle for a few years. However, once his career took off, there was no looking back for this artist. He dabbled with oil paintings and was successful in creating beautiful paintings which were later recognized as masterpieces in American Art. His themes and settings were closely related to places we visit in everyday life like hotels, railroads, theatres and streets. He belonged to the Ashcan School of art and his paintings were well-knit with proper geometric settings which marked his uniqueness. He was a prolific painter but his ill health did not allow him to paint. However, his creativity was not marred completely by his illness and he created some of the best known paintings in American art which continue to allure onlookers
Continue Reading Below awards: Logan Medal of the Arts

American Celebrities
American Men
American Artists & Painters
Male Artists & Painters
Cancer Artists & Painters
Childhood & Early Life
He was born on 22nd July, 1882, to Garret Henry Hopper and Elizabeth Griffiths Smith, in Upper Nyack, New York. He had a sibling named Marion and they belonged to a mercantile family.
He had an affinity to artistic work and after completing high school studies, he joined the ‘Correspondence School of Illustrating in New York City’ where he studied from 1899-1900. He then attended the ‘New York School of Art’ where he was trained by renowned painters William Merritt Chase and Robert Henri.
After completing his training as an illustrator, he embarked on three trips which later influenced his art form.
In 1906, he travelled to Paris and at that time it was the brimming with artistic revolution, and Cubism style of visual art had already taken place. There he was introduced to ‘Impressionism’ movement of art, which influenced his work to a great extent.
He made two more trips to Paris and some other European countries in between 1907-10. 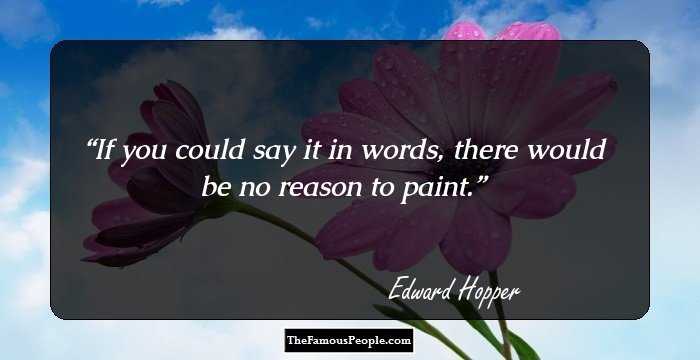 The Hottest Male Celebrities With The Best Abs
Career
In 1910, he went back to New York and launched into a career as a freelancer artist. He even arranged a studio there in which he tried to put his thoughts onto the canvas but found it very difficult to decide on what to paint.
During that time he made a painting named ‘Sailing’ which he exhibited in the ‘Armory Show’ in 1913 and became his first painting to be sold. He expected to earn some recognition after selling this painting but his hopes were not realised.
Soon after, he travelled to Manhattan and settled in Washington Square near Greenwich Village, where he continued to live till his death.
He then dabbled with some illustration work while working as the public relations handler of a movie company. Owing to his interest in theatre and movie he took up the job despite the fact that he found the job of creating posters uninteresting.
During 1915, this painter began to create artistic pieces using the technique of etching and made as many as seventy pieces which were about the city life of Paris and New York.
In the beginning of 1920s, he became popular as an etching artist and created some of the finest pieces using this technique like ‘Night on the El Train’ (couples in silence), ‘The Catboat’ (simple nautical scene) and ‘Evening Wind’ (solitary female).
He also created two significant oil-paintings during this time which were ‘New York Interior’ and ‘New York Restaurant’. He constantly created paintings but did not get desired recognition as a painter.
In 1920, his works were exhibited at the ‘Whitney Studio Club’, which even though was not a commercial success but it became a benchmark in his career. After this exhibition, he continued his artistic work and eventually got recognition. His painting ‘Girl at Sewing Machine’ was made during this period.
Within a few years, he got another exhibition to his credit, which was held at the ‘Frank K. M. Rehn Gallery’, New York. This exhibition turned the wheels of fortune for him as it became a huge commercial success.
Continue Reading Below
His marriage to Josephine Nivison, who was a fellow artist, helped him to manage his life and art work and in 1923, she helped him to get his watercolours exhibited at the ‘Brooklyn Museum’ and his painting ‘The Mansard Roof’ was sold to the museum for a handsome amount.
In 1930, one of his paintings ‘House by the Railroad’ was included in the collection of the ‘Museum of Modern Arts’, New York. Soon after, all renowned museums wanted to exhibit his paintings in their gallery and paid him well to acquire his works.
He and his wife travelled through the South Royalton, Vermont during 1937-38, and during this journey, he created some of his best watercolour paintings of which ‘Branch of the White River’ is one. A year later, he painted ‘New York Movie’.
During 1940s he painted prolifically and created some of his best paintings such as ‘Nighthawks’, ‘Girlie Show’, ‘Hotel Lobby’, ‘Morning in a City’ and ‘Office at Night’.
By the end of that decade, his health deteriorated which hindered him from painting. He did not produce paintings for a long time and spent the next decade in inactivity.
However, before his death he created some of his remarkable paintings like the ‘Hotel by a Railroad’, ‘First Row Orchestra’, ‘Morning Sun’ and ‘Intermission’. 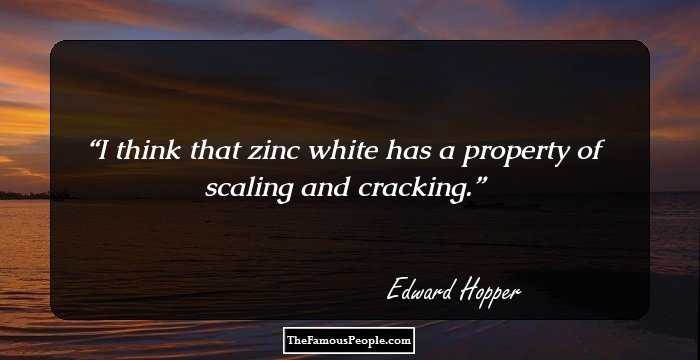 Quotes: Think
Major Works
Hopper created some of the best oil paintings which are still considered among the best paintings in American art. His use of light and darkness, and the well-knit settings within which his models are portrayed in seclusion, mark the uniqueness of his paintings. Some of his most renowned creations are ‘Model Reading’, ‘Nighthawks’ and Room in Brooklyn’.
Awards & Achievements
In 1923, he was awarded with the ‘Logan Prize’ and the ‘Chicago Society of Etchers’ for his etchings created during that time. He was also awarded with the ‘W.A. Bryan Prize’ during the same time. 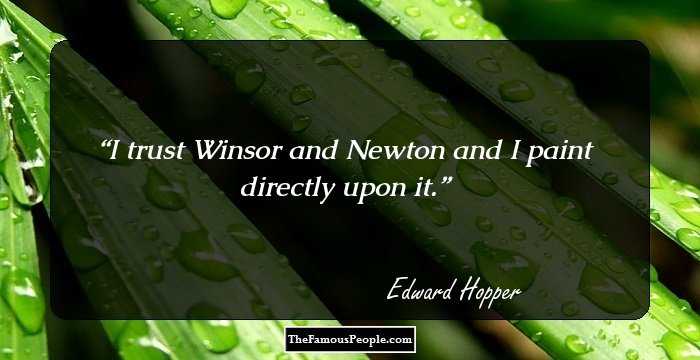 Personal Life & Legacy
In 1924, he married Josephine Nivison, a fellow student at the institute where they were trained under the tutelage of Robert Henri. This marriage helped Edward in his artistic venture as his wife supported him and even modelled for most of his paintings.
Josephine was his strongest support and provided constructive criticism which helped him improve his skills.
This exceptional painter breathed his last on 15th May, 1967, in his studio, and a few months after his death, his wife too deceased.
Josephine handed over their collection of paintings to ‘Whitney Museum of American Art’. Most of his paintings are displayed at the ‘Museum of Modern Art’, ‘Art Institute of Chicago’ and ‘The Des Moines Art Center’.
You May Like

Quotes By Edward Hopper | Quote Of The Day | Top 100 Quotes

See the events in life of Edward Hopper in Chronological Order