Dane Cook is an American standup comedian and film actor. As a standup comedian, he has a distinct style which can be likened to long-form story telling interspersed with multi meaning phrases, all delivered with a casual attitude. He credits his parents for his humorous side, inheriting from them eloquence and the ability to talk convincingly on anything. All he wants is to make the audience laugh and would go to any extent to do so. He could be funny, corny, and vulgar or just blabber like a retard, as long as it elicits laughter from the audience. Despite his popularity, many critics have come down heavily on him. They say that his humor is superficial, does not have any substance and even if it makes people laugh, it’s not really funny. They say that he is overrated and boringly predictictable. There have been allegations of plagiarism against him too, which have largely been ignored by him. Recently, he was embroiled in a controversy when he pulled out of a fundraiser for the victims of Boston Marathon attacks. Notwithstanding all the criticism, he is considered a tremendous performer with a large fan base. American People
American Men
Massachusetts Actors
Tall Celebrities
Tall Male Celebrities
Childhood & Early Life
Dane Cook was born on March 18, 1972, in Cambridge, Massachusetts, to Donna Jean and George F. Cook. He along with his elder half-brother, Darryl and five sisters was brought up as Roman Catholics in Arlington, Massachusetts.
After graduating from Arlington High School where he overcame shyness by doing standup comedy, he went to college and studied graphic design, but was keen on taking up comedy as a career. 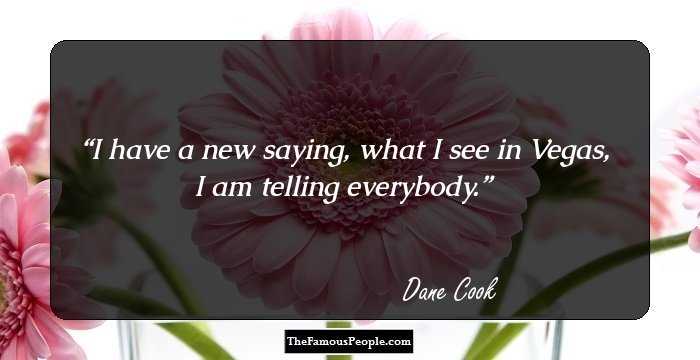 The Sexiest Men Of 2020, Ranked
Career
Dane Cook shifted to New York City and then to Los Angeles and started performing there. His career kick started in 1998, with his appearance on Comedy Central's ‘Premium Blend’.
In 2003, he signed a contract with Comedy Central, and soon released his first CD/DVD, ‘Harmful If Swallowed’, which contains his appearances on Comedy Central Presents, Comics Come Home 5, and Premium Blend.
‘Retaliation’, his second DVD/CD was released in 2005 which garnered great appreciation from the audience and was certified double platinum.
In 2005, ‘Vicious Circle’, a live standup comedy special, written, produced and performed by the comedian was aired by HBO and later released on DVD.
He shot two pilot episodes for his sitcom, ‘Cooked’, in 2005, but the project did not find any takers. The two completed episodes were eventually released on DVD as ‘The Lost Pilot Episodes’.
In 2006, he was cast in a leading role of the movie, ‘Employee of the Month’, co-starring Jessica Simpson and Dax Shepard. Poorly received by critics, the movie failed on the box office too.
‘Tourgasm’, a documentary based on the 30-day 20-shows tour with his friends Robert Kelly, Gary Gulman and Jay Davis was aired on HBO in 2006.
He starred in ‘Mr. Brooks’, a 2007 psychological thriller film, alongside Kevin Costner, Demi Moore, and William Hurt, as the inquisitive Mr. Smith who blackmails ‘Mr. Brooks’ using photographs of the crime.
In 2007, he played the role of a dentist in the romantic comedy film, ‘Good Luck Chuck’, which also starred Jessica Alba. Trashed by the critics, the film did well at the box office.
Continue Reading Below
In 2008, he, along with Robert Kelly and Al Del Bene, went to Iraq to entertain the American troops stationed there. He was the Headliner, Kelly, the Feature, and Del Bene, the Emcee.
In 2010, he gave auditions for the part of ‘Captain America’, for the movie ‘Captain America: The First Avenger’.
He also lent his voice to the character, ‘Dusty Crophopper’ in the animated film, ‘Planes’ in 2013. He reprised his role as Dusty in the 2014 sequel ‘Planes: Fire & Rescue’. 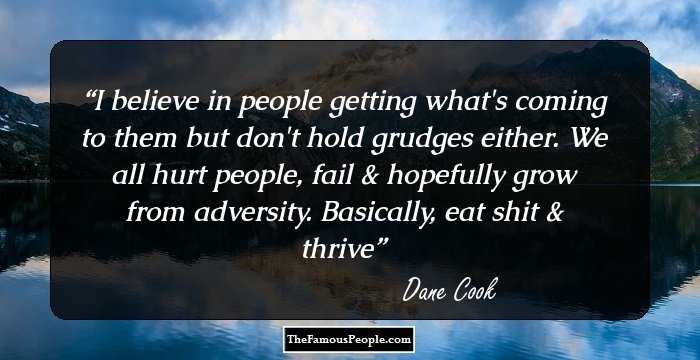 Quotes: Believe, I
Major Works
Dane Cook’s second album, ‘Retaliation’, released by ‘Comedy Central Records’ in 2005, peaked at No. 4 on the Billboard charts, went double platinum and sold 1,264,748 copies in the US alone.
His fourth album, ‘Isolated Incident’, was aired on Comedy Central in May 2009, and then released as CD. The new album did exceedingly well, and debuted at No. 4 on the Billboard 200.
Awards & Achievements
In 2000, Cook won the Pixie Award for the Best Actor in an ‘i-feature film’ for ‘Spiral’.
Nominated for four successive years for the ‘Teen Choice Award’, in the ‘Choice Comedian’ category, he won the award in 2007. Aired annually on Fox TV, the awards are based on votes by teenagers. 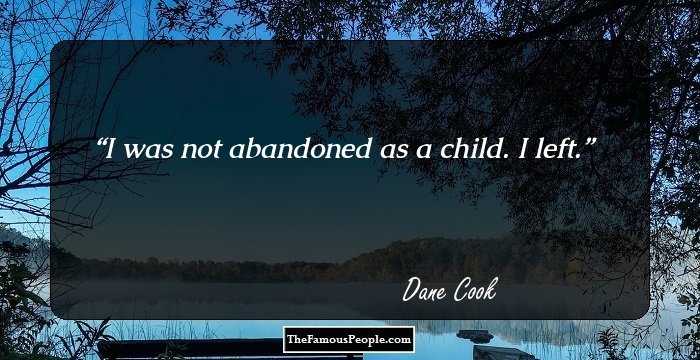 Dane Cook was in a relationship with Raquel Houghton. In 2017, he started dating Kelsi Taylor. In August 2022, he announced his engagement to Kelsi.

He lost his mother, Donna, to cancer in 2006 and father, George, a year later, also to cancer.
Trivia
This famous comedian’s half-brother, who was also his business manager, and his half-brother’s wife, were found to have embezzled millions of dollars from the comedian and were sentenced to prison.
This successful comedian declared, ‘I don't write any of my material down. I like to improvise and be spontaneous’.
You May Like

See the events in life of Dane Cook in Chronological Order