Cynthia Rhodes is a retired American actress, dancer, and singer, known for her roles in films such as ‘Flashdance’ and ‘Dirty Dancing’. Born in Nashville, Tennessee, she made her film debut in the romantic fantasy film ‘Xanadu’. Directed by Robert Greenwald, the film was heavily inspired by the film ‘Down to Earth’, which had released in the late 1940s. Rhodes gained popularity for her performance in the film ‘Staying Alive’, which was directed by Sylvester Stallone. The film starred her in a main role. Though the film was heavily criticized, it was a commercial success. It also received a Golden Globe Award nomination. Some of her other roles were in the American romantic drama film ‘Flashdance’ and ‘Curse of the Crystal Eye’. A conservative and religious lady, she did not appear in many films in her career as she refused to do risqué roles or perform nude scenes. Rhodes has also worked as a dancer in several music videos. She used to be a dancer for the rock band ‘The Tubes’. She was a member for the pop group Animotion as well. 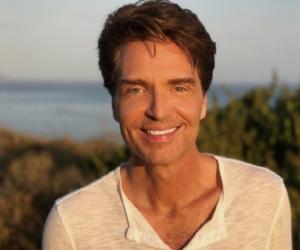 Zoë Kravitz
Actresses #1380
Film & Theater Personalities #3166
DID WE MISS SOMEONE?
CLICK HERE AND TELL US
WE'LL MAKE SURE
THEY'RE HERE A.S.A.P
Quick Facts

American People
Tennessee Actresses
Scorpio Actresses
American Actresses
Actresses Who Are In Their 60s
Childhood & Early Life
Cynthia Rhodes was born on 21st November 1956, in Nashville, Tennessee, US. Her parents were Adrian Rhodes and Edna Rhodes. She was raised as a Baptist and she studied at the Glencliff High School.
Continue Reading Below
You May Like

Who Is The Greatest Female Warrior In History?
Career
Before starting her acting career, Cynthia Rhodes used to work as a singer and dancer at an American amusement park. She made her film debut playing a small role in the romantic musical fantasy film ‘Xanadu’ in 1980. The film was directed by Robert Greenwald. The film didn’t do very well commercially and was met with mostly mixed reviews. However, it won the Ivor Novello Award for the best film song.
Her next film was the 1983 American drama ‘Flashdance’, where she played a supporting role. The film was directed by Adrian Lyne. Despite receiving heavy criticism from critics, the film was surprisingly a huge commercial success, grossing more than $200 million on a mere budget of $7 million. A sequel was also planned, but it never got made.
In 1983, she appeared in the film ‘Staying Alive’, playing one of the main roles. It was directed by Sylvester Stallone, who was also a co-writer and co-producer. The film was a commercial success and grossed nearly $65 million on a budget of $22 million. However, it was heavily criticized
The following year, she played a main role in the sci-fi film ‘Runaway’. The film was written and directed by Michael Crichton. It was a commercial failure, and was met with mixed reviews from critics.
In 1987, she played a supporting role in the famous Oscar winning film ‘Dirty Dancing’. Directed by Emile Ardolino, the film was a huge commercial success, as it surprisingly grossed nearly $214 million on a mere budget of $6 million! The film won an Oscar, a Golden Globe Award, and a Grammy.
In 1991, she appeared in the film ‘Curse of the Crystal Eye’. It was the last film in her acting career.
Due to her religious upbringing, she maintained a clean image throughout her acting career. She turned down several scripts that required her to pose nude. She also turned down offers to pose for pictorials in ‘Playboy’ magazine.
As a singer, Rhodes was a member of the American rock band ‘Animotion’. She worked with them for two songs ‘Room to Move’ and ‘Calling it Love’.
Major Works
The 1983 romantic drama ‘Flashdance’ is one of the few films Cynthia Rhodes has worked in. The film was directed by Adrian Lyne, and starred Rhodes in a supporting role. Other actors in the film included Jennifer Beals, Michael Nouri, Lilia Skala and Sunny Johnson. The film was a huge commercial success. One of the film’s songs ‘Flashdance… What a Feeling’ won an Oscar for Best Original Song.
Rhodes played a main role in the 1983 dance film ‘Staying Alive’. Directed by Sylvester Stallone, who was also a co-writer and co-producer, the film starred John Travolta, Finola Hughes and Steve Inwood in addition to Cynthia Rhodes. Though the film received negative reviews, it was a huge commercial success.
She played a significant role in the 1984 sci-fi film ‘Runaway’, which was directed and written by Michael Crichton. The cast included actors Tom Selleck, Cynthia Rhodes, Gene Simmons, Kirstie Alley and Stan Shaw. The film showed a malevolent scientist who tries to earn money through his manipulation of robots, and an honest police officer, who is on his mission to track down the robots and stop them. The film received mixed reviews.
‘Dirty Dancing,’ a 1987 American romantic comedy film, can be regarded as the most significant film in Rhodes’ career. The film was directed by Emile Ardolino and starred Jennifer Grey, Patrick Swayze, Cynthia Rhodes, Jerry Orbach, Kelly Bishop and Jane Brucker. The film won an Oscar, a Grammy and a Golden Globe Award. Not only was the film a huge commercial hit, but it was also met with positive reviews.
Personal Life
Cynthia Rhodes was once married to Richard Marx, a successful American singer and songwriter who has released a total of twelve albums. The two first met in 1983, when Marx, who is seven years younger to Rhodes, was hardly twenty years old. They started dating after two years, and finally in January 1989, they got married. The couple has three children. However, they eventually divorced in 2014, after a marriage of twenty-five years.

See the events in life of Cynthia Rhodes in Chronological Order