Advanced Search
Cris Collinsworth is a former professional American football player and sports broadcaster. Born in Ohio, Cris started playing football right from high school, even becoming an All-American quarterback. Attending college on an athletic scholarship, he played college football, then went on to be drafted by the ‘Cincinnati Bengals’ upon graduation, with whom he spent his entire 8-year ‘National Football League (NFL)’ career. Upon his retirement from the NFL, he switched to a new profession-that of a sports broadcaster. He is a television sportscaster for NBC, Showtime, and the NFL Network. He has won 15 Sports Emmy Awards and is the owner of Pro Football Focus, a sports statistic monitoring service. 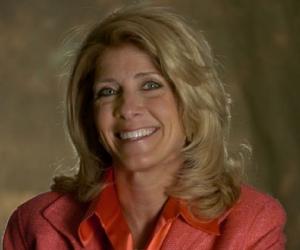 American People
Film & Theater Personalities
American Men
University Of Florida
Tall Celebrities
Childhood & Early Life
Anthony Cris Collinsworth was born on January 27, 1959, in Dayton, Ohio, USA. Son of educators Abraham and Donetta Collinsworth, he also had a younger brother, Greg (who passed away from cancer in 2004). In 1963, his family shifted to Titusville, Florida. There, Cris attended ‘Astronaut High School’, where his father was the principal. He started playing football, even becoming the high school football All-American quarterback.
College Career
Cris Collinsworth attended the ‘University of Florida’ in Gainesville, Florida, on an athletic scholarship. A senior captain on the ‘1980 Gator team’, Cris was named as an MVP of the ‘1980 Tangerine Bowl’. He was admitted into the ‘Student Hall of Fame’ for the ‘University of Florida’ in 1981. He graduated college that same year, with a BA degree in accounting.
NFL Career
Football team the ‘Cincinnati Bengals’ picked Cris Collinsworth in their second draft right after he graduated in 1981. He spent his entire football career, all 8 years, with the ‘Bengals’. While he moved to the ‘Tampa Bay Bandits’ in 1985, a bad ankle forced him back to playing with the ‘Bengals’, where he stayed until his retirement due a back problem, in 1988.
Broadcasting Career
He embarked on a career as a sports radio talk show host, with the Cincinnati station ‘WLW’, after his retirement as an NFL player. Cris joined NBC, broadcasting on NBC Sports from 1990-1996, and joined the NBC pregame show in 1996. He won his first Emmy Award for this show, in 1997 and went on to win 15 more Emmys during the course of his career. During this period, in 1991, he also went back to school to complete a law degree, from the University of Cincinnati College Of Law. He appeared on his first ‘Olympics’ broadcast as a track and field reporter, at the ‘1996 Altanta Olympics’.
NBC lost broadcasting rights to CBS in 1998, prompting Cris Collingsworth to move to the ‘NFL on Fox’ TV show. He was the colour commentator (who supports the play-by-play commentator, to fill in the airtime) on this show. While at ‘Fox’, he was a part of TV show 'Guinness World Records Primetime'. He was assigned to the lead broadcasting crew in 2002.
During the years 2006-2008, he was a studio analyst and co-host of ‘Football Night Live’ on ‘NBC’, also appearing on ‘HBO’ and the ‘NFL Network’ at the same time. He has even co-hosted the ‘Super Bowl XLIII Pregame Show’.
An announcement made on April 16, 2009 saw Cris Collinsworth become the co-host of 'NBC's Sunday Night Football', which is where he remains as of 2020.
Cris Collinsworth became a majority owner of sports statistic monitoring service, 'Pro Football Focus (PFF)’, purchasing their stake in 2014. He also made an appearance at the 2014 Olympic Winter Games, as a correspondent.
Family & Personal Life
Cris Collinsworth has been married to Holly Bankemper, an attorney, since June 3, 1989. They live in Fort Thomas, Kentucky, have 4 children, and one grandchild. Two of his children have followed him into sports; his son, Austin, is a former footballer and a team captain at the ‘University of Notre Dame’, and his other son, Jac, is a features reporter for 'ESPN' Channel's 'Sunday NFL Countdown'.

See the events in life of Cris Collinsworth in Chronological Order